Many Countries Are Stopping COVID19 - Containing Cases Is The Key - Every Day Of Delay Makes It Harder For Countries & The World
By Robert Walker | March 17th 2020 09:27 PM | Print | E-mail

COVID19 can be stopped. China has nearly made it go away completely. China had no new cases even in Hubei yesterday (17th March). It had four cases only on the two previous days - and it's only getting a few cases from other countries.

South Korea has nearly got rid of it, down to less than 100 a day for several days after a peak of over 1000 a day.

China peaked in early February and has been declining ever since.

If you add all cases over the WHO "West Pacific" region of South Korea / Japan / Singapore / Malysia / Indonoesia then it had its peak of cases two weeks ago. 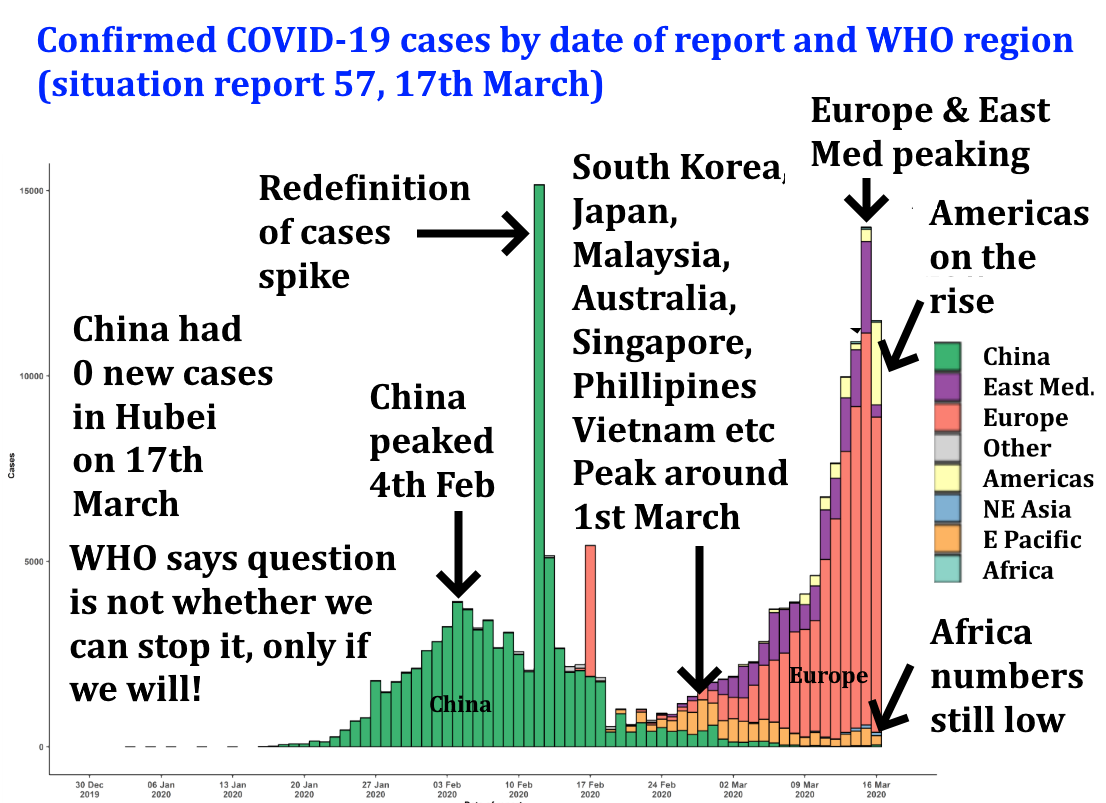 Text on image: China had 0 new cases on 17th March. WHO says question is not whether we can stop it, only if we will!
China peaked 4th Feb
Redefinition of cases spike
South Korea, Japan, Malaysia, Singapore, Phillipines etc Peak around 1st March
Europe & East Med peaking
Americas on the rise
Africa numbers still low

Graphic is from Situation report 57. For more details see my Many Countries Are Stopping COVID19 - Containing Cases Is The Key - Every Day Of Delay Makes It Harder For Countries & The World

This is nowhere near a major cause of death from disease. Every year there are far more deaths from AIDS, measles, and flu.

But we can stop it completely and there is no need for those deaths. For elderly people it gets far worse andn at 90+ only 810 out of 1000 recover.

It is nowhere near the biggest killer by way of diseases even this year.

And absolutely we can stop it. It peaked in China on on 4th Feb with no new cases on 17th March even in Hubei. It peaked in the West Pacific on 1st March, it is peaking in Europe right now. If we can get the UK to return to the fold with other European countries we can stop it here too.

Africa is well prepared as they took the WHO alerts very seriously and have been getting ready for this for weeks, and have previous experience in containing Ebola.

In the Americas, then many South American countries have taken it seriously. The US was slow to respond but is now acting promptly.

Rapid action makes a huge difference. Without any action it doubles every 3-4 days, so between 5 and 10 fold increase in 10 days.

If you act promptly those 100 cases never rise to more than a few hundred.

If you catch it even earlier then you don't even reach 100.

CONTAINMENT HAS TO BE THE CORE OF ANY STRATEGY

The WHO has emphasized this in ALL their press briefings, and I have watched every one.

What we need is aggressive case finding, contact tracing, and isolation.

Social distancing helps but only as part of a larger strategy with the main focus on isolation of confirmed cases and contacts.

On a personal level you can keep yourself safe by washing your hands thoroughly, and getting out of the habit of touching your face except with thoroughly cleaned hands and keeping a distance from sick people. It just takes practice and you soon just do all this automatically.See:

Everyone who does that is helping to stop the disease, not just for themselves. By breaking the chain of transmission they are protecting others around them too, and the entire world

However it's hard to get enough people to do that to stop it by doing that alone.

This virus mainly spreads through close contact such as families staying with each other or guests of a familiy, or through hospitals, clinics, doctor's surgeries, prisons or old people's homes. You have to keep treating people e.g. for a broken ankle no matter how much social distancing you do and it is not easy to stop people visiting each other at home.

You can only protect those places if you know who has the virus which is why you have to find the cases and contain them.

ENFORCING SELF ISOLATION IN A FREE COUNTRY

You can force people to self isolate by law if they have COVID19 because of the risk of harm to others. But in a free country you can't force them not to vist each other when you don't know if they have the disease,

Act promptly and you don't need lock down. China didn't do lock down outside of Hubei. South Korea and Singapore never did lock downs - some social distancing measures and that’s all.

The lock down just localizes the problem to a particular region. It continues incresing inside that region unless you combine it with isolation. In Wuhan only 0.15% of the population got it. They didn't just let all 11 million be infected.

However if you have let it get that far, it is possible to do lock down in a country that values freedom of speech and liberty. Italy did. You can also force someone to self isolate.

The UK government early on made self isolation of contacts for COVID19 enforceable by law. That is because you are restricting their liberty to protect others from harm. You can't however do it unless you know that they are a risk.

You can't force an entire country to self isolate but you can force individuals who are known to be a risk or even a potential risk to others to self isolate. That is all that is needed if you act promptly with rigorous rapid case finding and contact tracing.

IF WE STAY ALERT IT CAN'T SURGE IN A SECOND PEAK

Having stopped this outbreak once it is not going to happen again. Not unless overwhelmed by cases in the rest of the world.

China now can detect COVID-19 within 3 days of symptoms - because they have educated their population to go to a fever clinic if they get a fever and they have the diagnostic test capacity to test them all.

An outbreak can't start up if a new case is isolated and their contacts all traced before it happens.

According to Nature, modelers Tatem and Lai estimate that China prevented 8 million infections by the end of February with its action.

They also say that if China had started its control measures three weeks earlier then the total number of infections would have been reduced even more to a twentieth of the actual caess at the end of February.

The lesson for the rest of the world is we have to act promptly to stop and contain our outbreaks. Every week of delay, inaction and debate counts.

The graphic is from the latest situation reports.

Data on infants from here

Death rates for other age groups:

Disease mortality figures are from:

See my summary at [quora domain].com/q/duzzmyeobxjljrpq/Deaths-from-Aids-Flu-Measles-far-greater-than-for-COVID-19-COVID19-nearly-over-in-China-and-West-Pacific-COVID-19

The modeling of the effect of the containment on China is described in this Nature article:

Please read the rules pinned to the head of the group before posting. We have members who are panicking, experiencing the worst day of their life. About a quarter of our members are autistic and some others are manic. The rules are vital to keep it functioning properly.