This is running as a scary story in the news today. I’m asked if it means we are all going to die. No, it does not. That was a 10 °C rise and we are headed towards 3.6 °C at maximum with the Paris pledges already. With the Paris agreement if they continue to ramp up the pledges they should get within 2 °C, many countries have already got to that point in their pledges and a fair number to within 1.5 °C. Others, especially China and Russia, face huge challenges but are rising to them especially China. We aren’t currently headed for anything like 10 °C.

For projections about the present we need to look at the IPCC projection. This is not a projection, just an argument by analogy. The IPCC say that at 2 °C the coral reef ecosystems face near extinction, most gone and hard for them to recover after even a couple of years at 2 °C, but nothing else they studied does, including mangroves, they are rather sensitive but they are not yet affected at 2 °C. At 1.5 °C, which is something we can achieve with steep CO2 emission cuts, then we can save 10% of the coral reefs, which is enough so that they can then recover again.

As for the idea we are in the middle of a sixth mass extinction - more accurately we are at the start of one, if it continues and we don’t stop it. It would take decade to more likely centuries to count as a mass extinction.

If you look at the press release for this new study, it is much the same idea:

“Under a business-as-usual emissions scenarios, by 2100 warming in the upper ocean will have approached 20 percent of warming in the late Permian, and by the year 2300 it will reach between 35 and 50 percent. This study highlights the potential for a mass extinction arising from a similar mechanism under anthropogenic climate change.”

“Business as usual” means not doing anything, without the Paris agreement. We are already well below that.

They are saying that by 2300 if we continue burning fossil fuels, no use of renewables, no carbon caputre and offsetting, just ignoring the problem, we then get between 35 and 50 percent of the Permian levels of warming.

This just ain’t going to happen. The main questions are about whether we can stay within 1.5 °C or 2 °C. Nobody is questioning that we will do some action, indeed we are already, and we should be able to stay within around 3.6 °C by 2100.

None of our other ecosystems face these issues at 2 °C. But every ecosystem and every species we lose is sad. Losing the coral reefs would not count as a mass extinction but it would be sad to leave the next generation a world without corals. Even though they would eventually be replaced by other creatures (perhaps sponges). And there are many other reasons of course to stay within 1.5 °C in the IPCC report. For more on this see my

So what did these scientists say about the "Great Dying" at the end of the Permian era? They looked at patterns of extinction during this event and they found it nicely lined up with species in the oceans that would be most vulnerable to reduced oxygen.

So, the thing is that cold water can absorb a lot more oxygen than warm water. Fish that are used to living in the polar regions often expect a lot more oxygen in the water and may not do so well in the tropics.

When the planet warms up, then all the regions get less oxygen in the water. But tropical species can just migrate to a cooler place with more oxygen. Polar species can’t because they are already in the coldest part of the planet.

When they looked at the numbers of species that went extinct, then a much higher fraction of polar species went extinct than tropical species. This is summarized in this graphic they included in the press release, but most of the stories didn’t reproduce it: 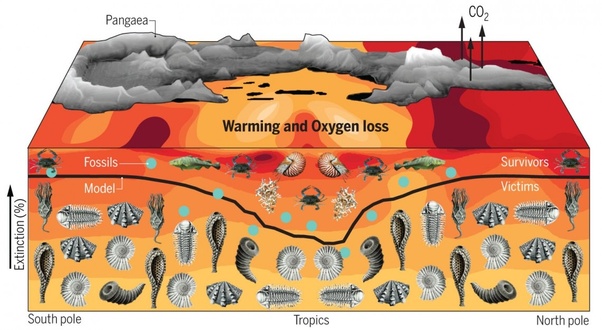 The black line here shows their model of the numbers of extinctions expected and the blue dots the observed data. A higher percentage survive at tropics than poles. The water is coloured to show temperature changes, with red being the most severe warming. The warming was because of CO2 emitted from massive volcanic eruptions (not something we expect today, geological conditions were unusual back then). Below the line you see some of the 96% of species that went extinct.

At the start then the conditions were similar to Earth today. They ran a general climate model and slowly increased temperatures by 10 C. At the end the deep oceans were oxygen free. But most of the extinctions weren’t due to that, they were due to the reduction of oxygen in shallower waters and especially at the poles.

What was clever about this study is that rather than hypothesize about the Permian creatures - we don’t know that much about them, just fossils, instead they used 61 modern species. Including “crustaceans, fish, shellfish, corals and sharks — using published lab measurements.”

So now they could use the data of real species, which are expected to be similar in their capabilities to these ancient species. They then looked at what happened.

They found that very few species were in the same place at the end as at the start of the simulation - they had to move or die.

They then compared the results with the fossil databases from this period, and what they found in the model matched what happened in the fossil record.

The press release is here;

And remember, whatever happens, we will certainly keep all our crop plants in seed banks, and we’ll have whatever we save in nature reserves, and zoos, and we can domesticate insects like the honey bees and we’ll keep all our domesticated animals, because as humans this is something we can do.

It’s the natural systems that are most at risk, including the oceans, the corals, tropical jungles etc.

HOW TO FIND THE PRESS RELEASE

This was their story:

So you can do the same, or else - if the story quotes from one of the researchers, chances are that’s not actually a quote from an interview (unless they are high profile like Scientific American or National Geographic etc) but just a quote lifted from the press release. Searching for that exact text will help turn up the press release, or else, maybe one of the stories that links back to the press release.

Apart from that for stories like this try looking in good science news sources, it’s a far better way to keep up to date with science and astronomy than the mainstream media:

Or you can try my

It is a Google custom news engine. It doesn’t seem to work as well as Google News, if you sort it by relevance you tend to get a few out of date results near the top and sorted by date, then you get things that don’t seem much connected with the story at the top. But if it’s a big story you often get some high reputation articles near the top of the search results there. It’s worth a try.