The false vacuum collapse is about a remote possibility, not just billions of years in the future, so far in the future that all the stars in the night sky have run out of fuel, long before.

There is no realistic possibility at present, or for billions of years, and it is of no concern. 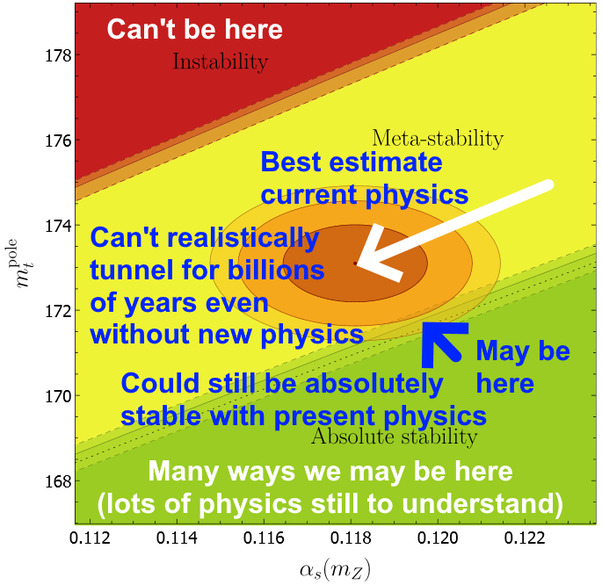 This another article I'm writing to support people we help in the Facebook Doomsday Debunked group, that find us because they get scared, sometimes to the point of feeling suicidal about it, by such stories.

Tommi Markkanenn, an expert on the False Vacuum, gave this endorsement to my analogies:

For anyone concerned about a possible vacuum instability affecting us now or in the future, please read this post carefully. I think it does a fantastic job in explaining why it is absolutely of no concern."

We get many people come to our group scared of this as a result of click bait journalism. Don't listen to the red top tabloids (the ones that run stories like "Residents TERRIFIED as ‘ALIEN FOOTPRINTS’ found in Indian village" - that is an actual title from the Daily Express). They are not going to report this properly, just as with all their fake asteroid warnings (see Did you know, NASA have NEVER issued any ASTEROID ALERT - most likely future warning: Tiny Asteroid to Splosh Harmlessly in Pacific Ocean) 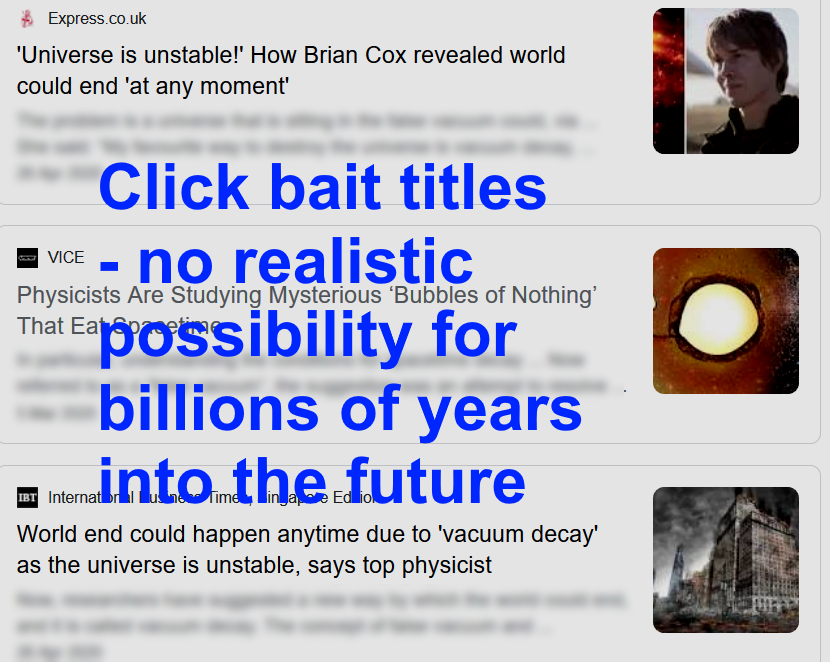 Text: Click bait titles - no realistic possibility for billions of years into the future

For this sort of story you should avoid the red top tabloids, the “Alien footsteps thud” type ones like

As you see in that screenshot, the International Business Times also run sensationalist stories and there are a fair few others that do, often just copying them from the Daily Express or other "red top" tabloid

But even the mainstream media like the BBC may have non scientific journalists cover the story who get it wrong.

Also mainstream journalists, when they get it right still often use click bait titles. It’s only if you click through and read to the end that you realize it is not something of imminent near future concern. By that time some of the readers will be panicking already and not paying attention to detail, and many people don’t read to the end of an article.

Good articles on this topic

There are some good articles on the topic, here are a couple::

For a bit more techy detail:

Although some of these are old articles what is said in them still stands today that it is not a realistic possibility now or for trillions of years. They have good explanations of why this is, which are worth reading.

Helping you understand how scientists speak

Short summary - according to the calculations of the theorists, nothing realistically can happen for many trillions of trillions of years. It’s just theorists working with math.

Physicists can calculate almost anything impossible and call it a chance, such as calculating the “chance” that if you leave a ping pong ball in a vault for trillions and trillions of years it would appear on the opposite side, or the vault itself turn into a museum, or a stradivarius violin spontaneously appear from nowhere in the asteroid belt. All these things have a “chance” according to theoreticians but you shouldn’t go off prospecting for violins in the asteroid belt :), because in ordinary language this is not possible. In the same way they can calculate a "chance" for a false vacuum collapse (Higgs vacuum decay) in an instanton. In ordinary non mathematical speech, it is not possible.

In this article I’ll try and give an idea of what the actual numbers mean from the false vacuum paper, and explain why it shows that it is of absolutely no concern. Pease do not worry and take this vacuum decay idea seriously, it is not going to happen for trillions of years.

One of the examples I use is for 24 planes to all accidentally crash at once into your house in the very next second after you read this sentence.

Since 24 planes can't crash into your house in the next second, a false vacuum collapse can't happen anywhere in the universe any time for billions of years (maths is the same)

This is not a real possibility and nor is the false vacuum collapse.

You are safe even from mythological space cows

Although the maths is very complex for the false vacuum decay, there is a way you can see for yourself that we are safe. Let’s make up a silly idea, that you think the universe could be eaten by a “space cow”. 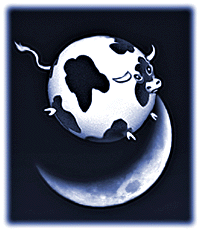 (This is an in joke amongst physicists, see Spherical cow)

There is nothing special about our current millenium as regards the universe as a whole. Myriads of stars and planets are born from gas clouds every day; other stars are getting old; myriads of planets are orbiting stars; myriads of galaxies continue turning; the universe is much the same as it has been for billions of years. To someone scared of mythological space cows, you could say:

This is simiilar to the Space Cow argument, but may be a helpful way of looking at it for some people as another way you can see for yourself that it is safe without all the complex maths. Remember that nothing happened to the universe in the lifetime of your parents, grandparents, great grandparents, going back to the first homo sapiens, back to astrolopithecens, homo erectus, back and back to the small mammels scuttling up trees at the time of the dinosuars, back and back to our single cell microbial ancestors and back to before evolution began on Earth, 13 millenia ago.

As for the Space Cows, there is nothing special about our current generation or millenium, so we are safe from a false vacuum decay..

This is about the vast future timescale of our universe, it is still very young, a baby really

Ways that life and civilizations could continue into the infinite future