No, The World Is Not Going To Explode Because Of Sea Water Sinking Into Subduction Zones - What Does The Research Say?
By Robert Walker | November 22nd 2018 03:04 PM | Print | E-mail

This is a very bizarre click bait title from the NY Post that is scaring people. There is nothing here to worry anyone. It is not true at all,even the article itself says nothing about the planet exploding. Just some journalists inventive idea about a way to get people to click on the title?? Fake news. But the research is interesting, an interesting puzzle

Other articles are more accurate, here are a couple of the better ones, though they still give the mistaken impression that the oceans are somehow disappearing into the Earth:

So what is really happening ? Nature (the scientific journal) summarizes it here:

This shows the idea of a subduction zone. 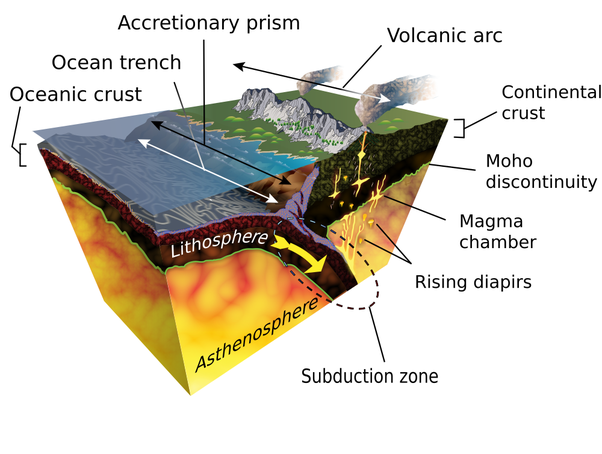 As you see some of the mantle rocks sink below the ocean floor. These rocks get hydrated by the sea water. They found a way to estimate the volume of those hydrated mantle rocks. They didn't measure the amount of water entering the sea floor directly. Instead they measured the amount of water in a large chunk of descending rock. From that, via a calculation, they can work out how much water is descending.

The technical paper is here Water input into the Mariana subduction zone estimated from ocean-bottom seismic data - you can only read the abstract, rest is behind a paywall, but that’s enough.

The end of the abstract is far less dramatic. It is a study of the Mariana trench where the Pacific plate dives down under the Philippines plate. They found that there is at least 4.3 times as much water being subducted into the Earth than previously estimated for this region:

“Combined with estimates of subducting crustal water, these results indicate that at least 4.3 times more water subducts than previously calculated for this region. If other old, cold subducting slabs contain correspondingly thick layers of hydrous mantle, as suggested by the similarity of incoming plate faulting across old, cold subducting slabs, then estimates of the global water flux into the mantle at depths greater than 100 kilometres must be increased by a factor of about three compared to previous estimates

So, extending to other subduction zones their results suggest that at least three times more water is going down into the Earth’s crust along with the crust than previously thought.

But the sea isn’t sinking, isn’t draining away into the Earth. It’s had the same amount of water for millions of years.

So, what is their conclusion? That the world has to explode?

Because a long-term net influx of water to the deep interior of Earth is inconsistent with the geological record, estimates of water expelled at volcanic arcs and backarc basins probably also need to be revised upwards.

In other words what goes down has to come up, sort of the opposite of what goes up has to go down.

This shows the idea of a volcanic arc (same figure as before):

As the rock dives down, it heats up the plate it dives under and this then causes material to heat up and rise as volcanoes and some of the water returns that way.

The Back-arc basin - Wikipedia is rather similar, happens below the sea, behind the magmatic arc: 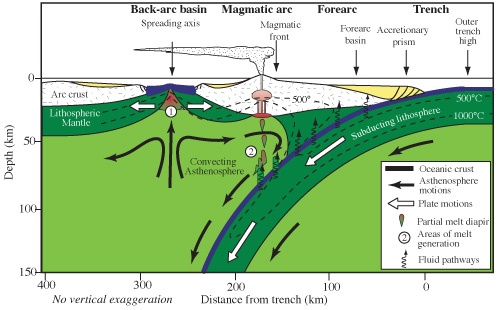 Cross-section of a subduction zone and back-arc basin

The idea of a backarc basin here is that the plate to the right is descending under the one to the left. This pulls the left-hand plate down too. Pulls it around and down. So the plate itself tears apart and that causes rising rock inside the plate as well as tearing the continental crust apart so creating the backarc basin. The areas of crust are shown in white in that figure and the backarc basin is the blue area between them where the crust got torn apart.

The South China Sea between Japan, China and Korea is an example of a backarc basin caused by this same fault the researchers studied, the fault between the Pacific plate and the Philippine plate: 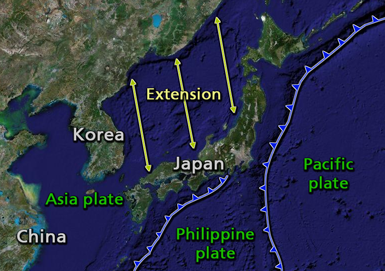 So, some of the water may come up in, say, the volcanoes of Japan, volcanic arc. Some may come up beneath the sea floor in the South China sea, the backarc basin. They know this is happening already, but it seems they must have underestimated how much water returns that way.

Actually lots of water lubricating fault lines is good, it means more earthquakes. The faults have to move because of continental drift and earthquakes are how the plates slip past each other. It's a case of lots of small earthquakes, fewer huge earthquakes. More small ones is better. If they are very small you don't feel them at all.Same also for tsunamis, if you can have it move upwards or downwards just a smidgen at a time you won't get a tsunami. So it is good rather than bad.

But as usual it is just finding out more about how our Earth works. Nothing has changed. We won’t get more or fewer earthquakes as a result of scientists knowing this. Maybe understand some geological processes better once the mystery is solved.