This is an interesting paper but it’s been misreported widely. Over the last decade the world has continued to get greener almost everywhere, because of the CO2 fertilization effect, lengthening growing seasons in northern latitudes and human initiatives to improve agricultural yields, restore degraded land, reverse desertification and plant trees. That's especially so in India, greening by over 6% per decade mainly through intensive agriculture, and in China, greening by over 10% per decade, because of its work on reafforestation, restoring degraded land and more intensive agriculture.

Only 5% of the Earth has a browning. So why does the map in this recent Nature paper seem to show the opposite?

Well it’s because it is a map of a change in the RATE of greening.

The red areas show parts of the world that are no longer greening quite as fast as they used to but most of those areas are still getting greener every year.

Other areas, notably India and China are continuing to green faster and faster. Even the Amazon rainforest, despite the deforestation, is shown as green on this map, which menas it is greening faster since 2000 than it was before 2000.

Commenting on this article

Sadly Scientific American are running an article from ClimateWire due to an arrangement they have with EENews which is seriously mistaken. They have been doing this for a while and as a result a few articles occur there that are not up to their usual standards. They are reporting it as more than half the planet browning which is seriously wrong, only 5% is.

ABOUT CO2 FERTILIZATION EFFECT AS WELL AS HUMAN ACTIONS

This is about the CO2 fertilization effect that plants are getting greener pretty much the world over as the CO2 levels increase which is helping to offset much of the CO2 emissions.

So, greening is not the normal growth of plants but how the greenness of the planet as a whole is increasing.

It is also about human actions.

If everything is just growing normally without any increase in vegetation cover from the previous year, it would not count as greening.

Let’s describe what is already known to give it context as this new research does NOT contradict this.

Only a small part of the world, less than 4%, show a browning effect. Many areas have an increase in leaf area of more than 50%. Since the 1980s, enough new leaves have sprouted to cover twice the area of mainland United States

In another study, then from the early 2000s, the leaf area has increased by 5%, an area equivalent to all of the Amazon rainforests. One-third of Earth’s vegetated lands are greening, while 5 percent are growing browner. The study was published on February 11, 2019 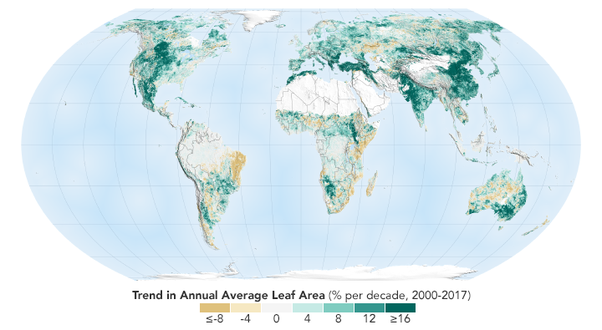 This shows the greening or browning from 2000 to 2017 - the change not the overall greenness. China and India stand out and account for a third of the greening, although they have only 9% of the area of vegetation in the world.

42% of China’s greening contribution is from it’s forest conservation and expansion program, much of the rest (32%) from intensive cultivation of food crops.

For India, it’s the other way around, 82% of the change is from the intensive cultivation of food, with an increase of a remarkable 35 to 40% since 2000, alone, mainly through multiple cropping where a field is replanted to produce more harvests several times a year. 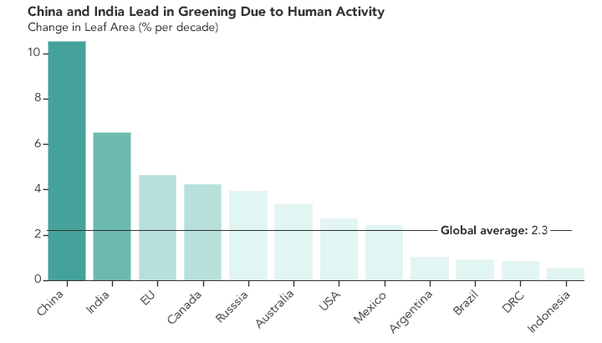 This new map is for changes in the RATE of greening,

They found that the world is continuing to green but averaged over the whole world, it is no longer greening faster and faster as it was last century with each decade having a slightly faster greening rate than the previous one.

To take an example, suppose the greening was only due to reversing desertification. If you reverse desertification for the same area of land each year, you’d get a constant rate.

If you’re program of reversing desertification really takes off and each year more degraded land is restored than you restored in the previous year, then for as long as that continues you will see an increasing rate.

This is the average over the land:

“Time series of NDVI. The numbers show the change rates of NDVI, and * indicates the significant changes at a significance level of P < 0.05.”

This is their map with the red and green areas, but the red areas are the areas where the rate of greening is slowing down not where greening has stopped. They are NOT areas of browning. 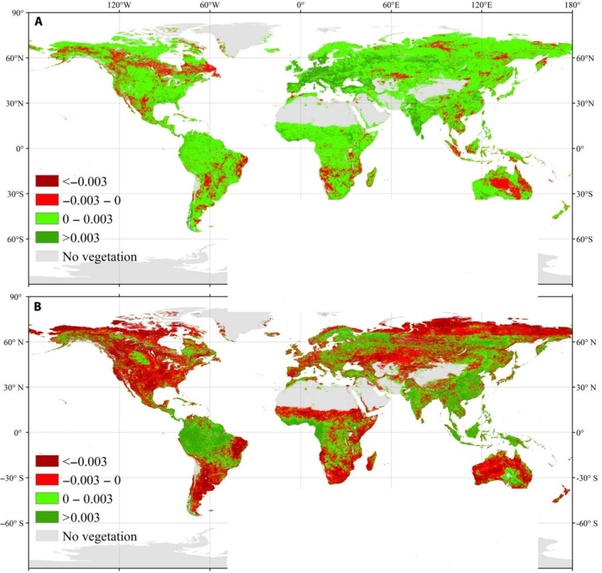 Over Brazil despite the deforestation it shows as greening faster and faster in the last decade, and over most of China and India it's the same, but over much of northern Europe and North America and Australia it is still greening but greening a bit less fast than before.

Plants have not only been getting greener due to the CO2 fertilization effect but up to 1999 the rate at which they got greener also increased.

Since 1999 they have continued to get greener but over the world as a whole, at a more steady rate of increase.

Recently some of the greening has been due to India having two or more crops in a year instead of one. That obviously can't keep on going indefinitely but it’s interesting to see that both India and China are shown green in the second map. Their efforts on reversing desertification and growing more crops are continuing to have more effect each year rather than less.

In the future this greening eventually slows down due to heat stress but not for a while yet. This should help predict when that happens which is important for the climate modeling. It's not as dramatic as it seems but important research.

“Decreased rates of vegetation growth will substantially reduce the ability of plants to absorb atmospheric CO2. The CO2 concentration in the atmosphere will increase, if other conditions did not change, which will result in a stronger greenhouse gas effect.”

Sadly Scientific American, unusually, seem to be misreporting it, a surprising error for them and a serious one. This is the Google News preview:

If you click through to the article it reads:

The world is gradually becoming less green, scientists have found. Plant growth is declining all over the planet, and new research links the phenomenon to decreasing moisture in the air—a consequence of climate change.

Since then, more than half of the world’s vegetated landscapes have been experiencing a “browning” trend, or decrease in plant growth, according to the authors.

Earth Stopped Getting Greener 20 Years Ago

At the bottom of the page you see: 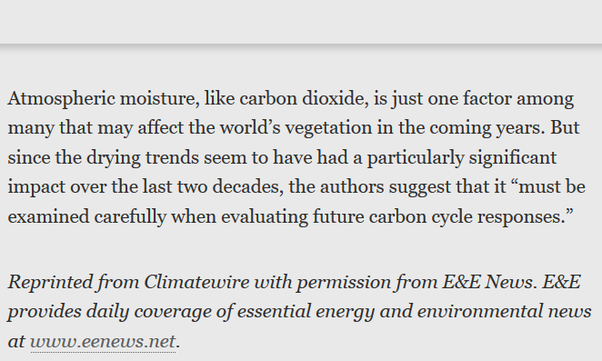 The original of the Scientific American article is here, but you have to pay to see it

Scientific American’s own articles continue to be good - but do check to see if the article is reposted from somewhere else. If it is then it’s possible that it has serious mistakes in it, sadly.

And we aren't helpless here. We can do a lot by reversing desertification and by improving biodiversity (biodiverse forests capture more carbon and would be greener from orbit) and with cover crops on land when it is fallow, and with flower rich field margins,and by interplanting trees and shrubs in our grassland, and in many ways.

For a recent example, the

This is part of a major greening project going on in Ethiopia right now.

As an example, this earlier project in China greened the Löss Plateau, which is the size of Belgium - you might think this is image manipulation, but no, this is a real project: 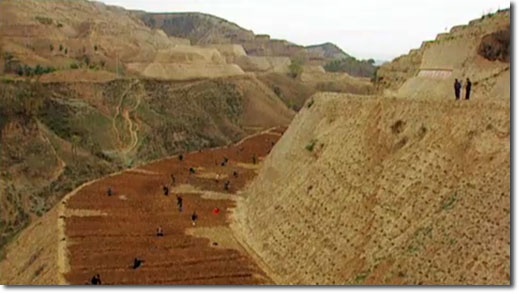 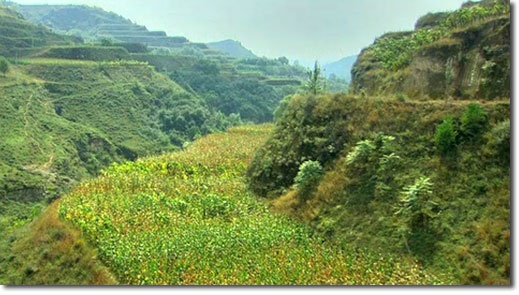 Many more examples in my

The potential for global forest cover is vast, also for reversing desertification.

There are many projects underway worldwide.

Also - there’s seaweed farming. This plays only a small role at present but it has almost unlimited potential, and it has the advantage that while removing CO2 from the atmosphere, it also reverses the acidification of the oceans. For more on this:

Positive side of climate change facts, after two years of action, heading for 3°C with 1.5°C well within reach

Order Patterned With Chaos, How Climate Is Predicted For Decades - With Exact Forecasts Only For Days

Let’s save a million species, and make biodiversity great again - UN report says we know how do it

No Scientific Cliff Edge Of 12 Years To Save Planet (or 18 Months) - Can IPCC Challenge 'Deadlines Make Headlines' Misreporting?