This UN Report is not saying we are going to be unable to feed everyone. But we need to be careful to maintain the biodiversity of the wild relatives of our crops and also of our ecosystems to be most resilient. We don’t risk mass famine, they say that specifically in the interview with the BBC but we need the biodiversity to deal with future issues such as for instance pests and diseases of our crops. On this the situation is rather encouraging, especially if you read the report itself.

This is another story running in the sensationalist press about harmless asteroids, leading to exaggerated scary headlines and this is part of my work to write articles that present the same material without the exaggerations of the sensationalist press or even sometimes the conventional mainstream press too. It is to support people we help in the Facebook Doomsday Debunked group, that find us because they get scared, sometimes to the point of suicide, by such stories.

I haven’t yet read it all cover to cover as it is very long but it is great to dip into and read for instance about the Malaysian stingless bees pollinator program or the German Action Program for Insect Protection and many other such programs now underway worldwide.

Most countries reporting to the UN have many programs in place to protect biodiversity, planting trees, ground cover, and measures to make sure that pollinators of crops thrive, and the main issue is one of ways to help get these programs working optimally and to find out what are the most effective measures they can take. There are many knowledge gaps the report identified which will now need to be filled. 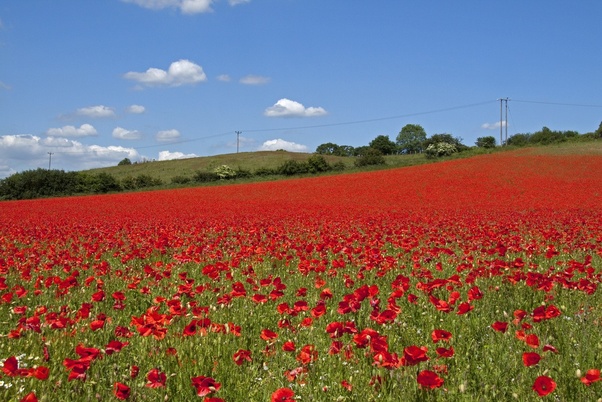 The report itself is here:

FAO's Director-General José Graziano da Silva put it like this:

"We need to use biodiversity in a sustainable way, so that we can better respond to rising climate change challenges and produce food in a way that doesn't harm our environment."

It is about biodiversity of our food as well as of the ecosystems. There are many species of apple, say, but only a few of them are sold in supermarkets. Same for many other species, bananas, rice, carrots, potatoes, you name it and most of them have lots of species that are grown in tiny numbers, by local farmers, or occur in the wild, and only a few species are used commercially, maybe even just a single species sometimes.

Actually the case of the Banana may be a particularly good example of this, to take a different example from their one of the potato which is also a good example. You may not know this, but nearly all the bananas you buy are not only one species, they are clones, reproduced by cloning rather than pollination.

That’s right, just about every banana you eat is genetically identical. There was an earlier banana the Gros Michel that tasted better and was grown in vast numbers, and originally was the only commercial banana there was. They also were all genetically identical and so when a disease began to spread then they were all susceptible, with no resistance at all. It was no longer possible to grow it. They fixed that by finding the Cavendish which was similar enough to be acceptable even though it didn't taste so good to consumers accustomed to the Gros Michel. But with advertising campaigns they got over the difference in taste and now everyone eats the Cavendish. Now there is a disease affecting the Cavendish and they may need to grow another new variety.

This is about the banana

So anyway that is all sensible and important.

They do also discuss insects, and I’d like to discuss that particularly here, after that low quality one that got so much attention a week ago. See my

Some stories even link them together, but this is altogether in a different league. Being the UN it is systematic and thorough.

This is what the UN report says about wild insects and crops, it is much more to do with species diversity of insects They do a detailed analysis later on in the article, but this is a summary section near the start:

"While farmers in intensive systems often rent managed honey bees to pollinate their crops, the majority of farmers rely on bee populations maintained by local beekeepers and on wild pollinators. Moreover, it has been shown that pollination services are enhanced by the presence of wild insects even where honey bees are abundant. Both higher pollinator density and higher species diversity of pollinator visits to flowers have been found to be associated with higher crop yields. Species diversity among pollinators can also be important in buffering the supply of pollination services against the effects of fluctuations in the populations of individual species "

"Temperature changes associated with climate change can lead to shifts in flowering periods and mismatches between them and the active periods of pollinating insects, with negative consequences both for pollinator populations and for pollination services, although effects on pollination may be mitigated by the presence of a diverse range of pollinators ,Other seasonal abnormalities such as more frequent cold or windy days in spring can also disrupt pollination services, with pollinator diversity again potentially playing a buffering role. Shifting climatic zones are likely to require pollinator species to alter their geographical ranges. Some species may struggle to do this with sufficient speed"

Later on in the section 4.3.4 Associated biodiversity for pollination they talk about insects in detail. They talk about some individual reports.

They mention the German study, and that Germany has started an Action Program for Insect Protection which is here (you can use google translate to see it in English): Insektenschutz

They talk about many countries who submitted reports tot the UN on measures they are taking to ensure biodiversity as part of their food and agriculture policies. This table is from 5.2 Overview of management practices and approaches 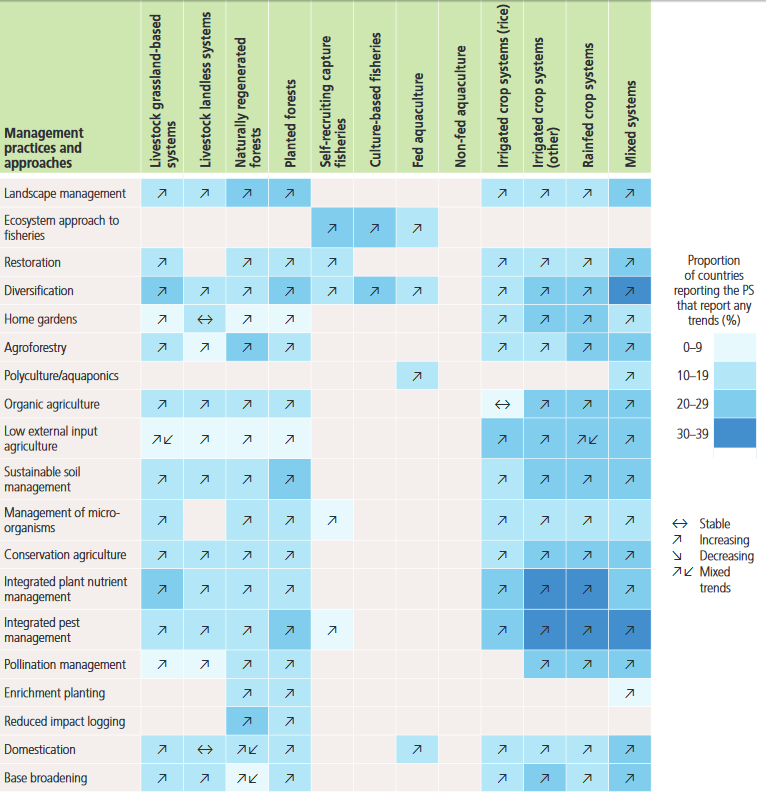 For pollinators, the first column of this table summarizes their conclusions: 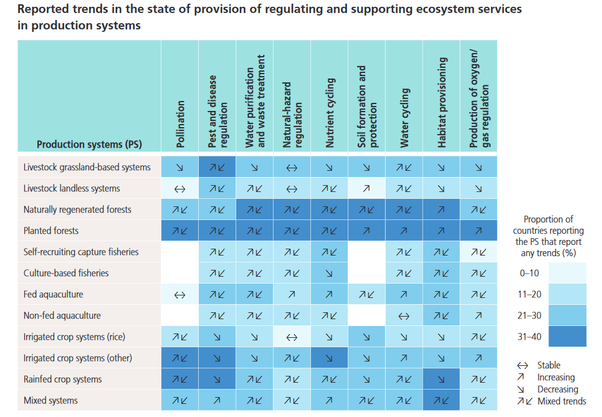 Summarizing this table they say (page 174) that they were decreasing only on livestock grassland-based systems. Everywhere else, stable or mixed trends (i.e. neither increasing, nor decreasing nor stable trends pedominate).

The main causes of decline identified by the countries were pesticides, human induced habitat loss, fragmentation, and climate change. Amongst those reporting increasing trends were Nepal due to crop diversification, several European countries due to flower strips in and around fields (as a result of an agri-environmental scheme) and increases in forest area particularlly planted forests. While logging, natural disasters such as hurricanes, invasive species, overgrazing in Argentina and undergrazing in Norway all were thought to have caused declines in numbers of pollinators. See the section ''Status and trends of pollination" on page 134.

They remark on the limited data for insects, but it is vastly better than that insects study that hit the news a week or so back.

They talk about many measures that countries are taking to help support pollination of their crops. For instance they cover Malaysia’s “stingless bees” project. These are a different species from honey bees that are adapted to tropical and subtropical species and are better able to pollinate their crops than traditional honey bees. And they do also produce honey. Stingless Bees - Facts, Information & Pictures

The government has promoted keeping of stingless bee colonies to help with pollination:

There are many more details there in the report about the many things countries worldwide are doing to encourage biodiversity. As well as UN recommendations of ways that they will be able to do more of this in the future.

If you read the report itself it is far from bleak and rather heartening to read about all these projects so many countries are involved in to protect biodiversity.

The report is reasonably optimistic about the future. Many countries implementing such practices for crops, but having problems getting them in place that need to be addressed. The report itself has identified many knowledge gaps and actions they need to take in the future.

This is their conclusion of the report:

Positive global developments include, on the one hand, growing awareness internationally of threats to the sustainability of food and agriculture, including those related to the loss of biodiversity, and on the other, upward trends in levels of adoption of various management practices that potentially contribute to the conservation and sustainable use of BFA. These developments need to be built upon by the global community. Knowledge gaps need to be filled, cooperation strengthened, including cross sectorally and internationally, and financial, human and technical resources mobilized. Effective legal and policy frameworks need to be put in place. The country-driven process of preparing The State of the World’s Biodiversity for Food and Agriculture has led to the identification of numerous gaps, needs and potential actions in the management of BFA. The next step is to take action. Over the years, the Commission on Genetic Resources for Food and Agriculture has overseen the development of global plans of action for genetic resources in the plant, animal and forest sectors. Implementation of these instruments needs to be stepped up. Consideration also needs to be given to how the international community can more effectively promote synergies in the management of all components of biodiversity, across these sectors and others, in the interests of a more sustainable food and agriculture.