Nothing to worry about for us. It's pointing in the wrong direction to ever harm us with the gamma ray burst jet. Their best fit model is that it is angled at 30 degrees to the line of sight.

It is too far away from us anyway at 8,000 light years. And there are no gamma ray burst candidates close enough to harm us. I go into that in detail in my article:

But this would be seriously bad news for any living beings that are on stars right close by within a few light years especially, along the line of the jet. Up to 50 light years away, it would cause significant effects on a planet like ours.

Luckily this doesn’t apply to us. We are too far away and also not in the direction of any future jet. Also they don’t know for sure that it will go off as a gamma ray burst. And though it will happen “any time soon” for an astronomer “soon” means some time in the next 100,000 years or so. Far longer than all of recorded human history.

But for some other planet along the line of the jet and much closer to it, some time in the future, this is what happens:

The gamma rays themselves are harmless as they can’t get through the atmosphere, nor can the X-rays, because our atmosphere is equivalent to about 10 meters thickness of water in mass. But gamma rays can get down through our atmosphere as far as the ozone layer and destroy the ozone, removing its protection. That is, assuming it is a planet like us with oxygen and an ozone layer. They would then have increased UV for a number of years because of the ozone protection removed.

Then, the cosmic radiation - charged particles, the rapidly moving gas in the jet, is also harmful for nearby planets. This arrives later. It can’t get through the atmosphere, at least, not very far, only a few particles make it all the way to the ground - but it hits gas in the upper atmosphere which creatures muons, heavy electrons. Heavy electrons can get through and would cause increased cancer.

You wouldn’t want to be living on a planet that close to this star when it goes off, especially with the increased cancer risk - unless you are a lifeform that for some reason can’t get cancer. And there are such animals.

On Earth, elephants are an example. Though they live long, only 5% get cancer. They have natural cancer protection in their cells.

Bowhead whales are an even better example. They don’t seem to get it at all, researchers have not found a way to get a bowhead whale cell to go cancerous.

Mice are very cancer prone but naked mole rats, another rodent, don’t get it at all. After decades of observation, no naked mole rat has ever been found with a tumor.The animal that doesn't get cancer

So - extra terrestrials that don’t get cancer might be perfectly fine getting millions of muons sleating through their bodies :). Unless so close that there are so many of them, they tear the molecules of their bodies apart, or something. There can be levels of radiation so high that an organic being can’t survive, not even microbes. But apart from that.

There are many microbes also that are amazingly radiation resistant. Just a single cell microbe, can’t get cancer, but the can life in reactor cooling ponds in the case of radiodurans, and they repair their DNA in real time as soon as it is damaged. A creature that lived in a high radiation environment might even have all its cells like that, able to walk around in a reactor cooling pond and not notice anything.

So, some ET’s perhaps could swim in a reactor cooling pond, for fun :).

WHAT ABOUT THE NEW STAR?

First, this is an actual photo, not an artist’s impression.

The brighter “star” here is actually two stars, the new system. The other star is a third companion that orbits it at a vast distance. One of the two central stars is about to collapse as a supernova.

The nebula is made up of gas and dust. The gas here is moving really fast, 3,400 kilometres per second

The dust is moving much slower, only 570 km/sec

What they think is happening is the gas blown out from the equator of the rapidly spinning star forms a thick disk around it. A second star is orbiting the rapidly spooning star but at an angle to its equator. Each orbit the second star slams into the gas disk and that sends a pulse of slow moving dust out into space. Here is a simulation they did which modeled the pinwheel effect pretty well: 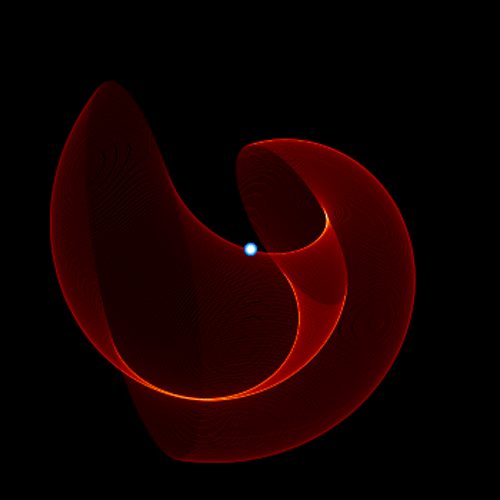 Pauses at the configuration seen in the actual observations: 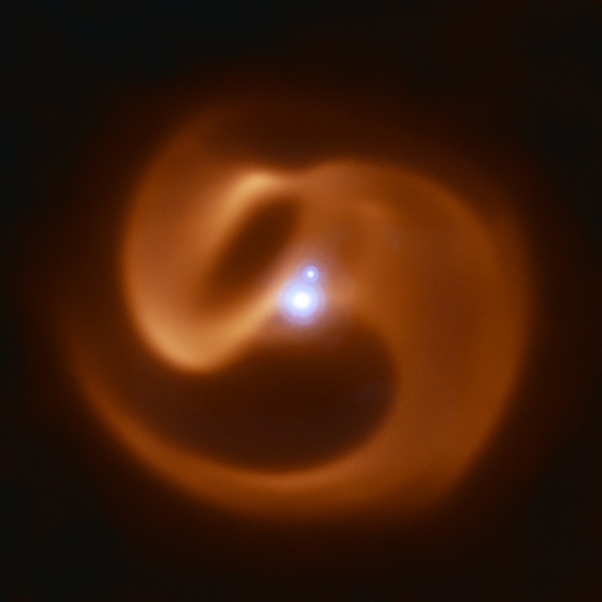 It is based on this simulation that they figure out it is not pointing towards us.

This rapid spin means that when it runs out of fuel and collapses to a black hole the poles will collapse first. This is what astronomers think leads to a gamma ray burst along its poles, very bright light outshining an entire galaxy tight beamed for a few seconds along its axis.

A star that doesn’t spin so fast collapses as a normal supernova. But one that spins so fast that the poles collapse first before the equator will collapse in a way that triggers a gamma ray burst along the axis through its poles.

Astronomers used to think that such a star was unlikely to impossible in our galaxy because our galaxy has lots of heavier elements. The heavy elements streaming out in the gas flowing out from the star would take away a lot of angular momentum and slow it down. And in actual practice nearly all gamma ray bursts are from galaxies with mainly young stars without much by way of heavier elements beyond hydrogen and helium.

But even though Apep has lots of heavy elements it is still spinning very fast, fast enough for a gamma ray burst. It’s mysterious, but perhaps there was a third star in the center and two stars merged to make a very rapidly spinning star and the companion.

Whatever the reason it is a very very unusual system, and a surprise that it even exists.

These very young but also very massive “Wolf-Rayet” stars are rare as it is, only a few hundred known in our galaxy. It is surprising to find two of them orbiting each other. And for one of them to be a merge of two other stars, even rarer.

This complicated scenario seems to be a new way to form gamma ray bursts in a galaxy rich with heavier elements like ours. One that the astronomers hadn’t thought of before

Very young galaxies have only hydrogen and helium and a bit of lithium - from the Big Bang. All the other elements are made in stars, in one way or another, through nuclear fusion - or some of them, during supernova explosions. Every element in your body except the hydrogen was made in some ancient star that either blew off its atmosphere or collapsed in a supernova billions of years ago, long before our sun was born, and then some of those atoms got into our sun’s birth nebula.

They used to think that gamma ray bursts needed galaxies with its stars made mainly of hydrogen and helium, unprocessed Big Bang material. This is a new way to make them in a galaxy with processed material and heavier elements.

This summarizes information in:

This is the paper in Nature, sadly behind a paywall for me:

This is a very thorough article about it by the astronomer Phil Plait, of “Bad astronomer” fame:

This is the Wikipedia article: