Stephanie Pulford
Remember when Bugs Bunny dressed as Brunhilda to mess with opera viking Elmer Fudd? If the What's Opera, Doc? ended with Bugs biting off half of Elmer Fudd’s head to keep him hanging around as an immobile food source, then the "Kill The Wabbit" cartoon would essentially tell the story of the Spotted Predatory Katydid. This bug-of-prey lures lovesick male cicadas by decoding the complex cicada mating duet and imitating a lusty cicada female. As soon as the male cicada gets in grabbing range, the duet becomes a lot less romantic.

The male cicada’s mating aria is impossible to imitate. Each species has its own long, loud, and acoustically complex mating song, complete with an introduction and multiple motifs. Evolution lavished some serious design on the male cicada’s sound system, but dropped the ball when it came to the female’s simple flapping response. Researchers can fool a male cicada into duetting with a well-timed snap of the fingers. The spotted katydid also exploits the female’s response, using its legs to click and jump in time with the male’s song. 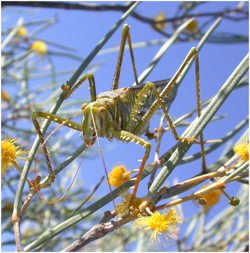 This strategy is called aggressive mimicry, and it’s not unheard of in insects. For example, the predatory Photuris versicolor firefly mimics the mating light signal of his cousins, the Photinus fireflies, in order to score a cannibalicious insect meal.

Most insects that aggressively mimic reproductive traits are taxogenically similar to their prey, borrowing mechanisms from their own reproductive practices. This makes the Spotted Predatory Katydid and his amorous cicada snack somewhat special—they’re almost as different as, well, a human and a rabbit dressed as a hot valkyrie.

The sonic lure of the katydid has nothing to do with its own reproductive signalling. Both male and female predatory katydids can lure a male cicada with imitation clicks and jumps. And though the cicada’s song is very species-specific, the katydid’s impersonation is not. In the laboratory, the katydids can make a pretty good guess at the correct timing for species of cicadas that they’ve never encountered in their natural habitat.

To weed out potential mates from predatory poseurs, the male cicada has had to evolve a few tricks of his own. His song locates a female, but it also tests her. Cicadas who live in the neighborhood of the Spotted Predatory Katydid have evolved especially complex musical passwords. Their songs have introductions, solos where no female signalling is allowed, and even fakeout verses that prompt their precocious predator to guess at a false response. If his partner misses his cues the male cicada bolts, leaving the katydid to try its sexy disguise again on less discerning prey.