Stephanie Pulford
Welcome to what has become Inadvertent Cicada Week in this column.  Obviously, I'm fascinated by them.  This started around the summer of 2003, when I was completely addicted to a certain farm-simulator game for the Nintendo SP.

During virtual summer on my virtual farm the game's music was overpowered by a jarring REEEREEEREEEREEEEEEE sound, intended to represent Japan’s singing cicadas.  When I finally managed to turn my Gameboy off to get some good ol’ grad student day-sleep in the relative stillness of central Pennsylvania, I found that the REEEREEEEEEEE noise had followed me.

The real-life farms of the eastern United States have plenty of their own singing cicadas, and the noisy bugs had overrun my town.

I’d imagine that cicadas are the signature sound of summer days in many other places, as well.  They’re LOUD.  At over 90 decibels, cicadas can compete with motorcycles.  The almost-trademarked idling roar of a Harley comes from its V-twin engine, which has a displacement of over 700 cubic centimeters.

It’s hard to believe that an insect can make just as much noise with less than 3 cubic centimeters of sound equipment. 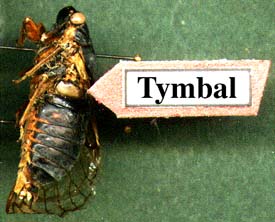 Their secret is in the well-tuned anatomy.  The primary noisemakers of the cicada are two organs called the tymbals.

The word sounds similar to “tympani” and “cymbal” for good reason.

It acts as a rigid plate that resonates, creating the cicada’s signature song.  The tymbal is closely coupled to a series of ribs that are made of the hard chitinous cuticle that also forms the insect exoskeleton.

These ribs do something that ours, thankfully, can not.  During the cicada’s song, they buckle inwards with a quick snap, which delivers a pulse of energy to the tymbal like a hammer to a gong. The cicada is perfectly tuned so that the ribs buckle successively and in phase; each buckle causes a wave that matches the wave of the rib before it.

Thanks to the constructive effect of these pulses, the tymbal sustains a long, loud sound which is further amplified in air sacs and the cicada’s own eardrums before leaving the cicada.  A precise balance of mass, stiffness, and elasticity is required to sustain this insect’s fortissimo.  Even slight changes to the mass of the tymbal and the succession of rib-strikes reduces the sound-producing power of the cicada, damping its mighty roar to the weak whimper of a cricket.

The cicada sings for the same reason as many a band's frontman: to meet ladies.  But there is no Janis Joplin at the cicada’s Woodstock.  The female cicada can’t vocalize.  Instead, she holds up her end of the banter by delicately flapping her wings, mesmerizing the males within close range.  Researchers also are big fans of the female’s wing flick, but for an entirely different reason-- it’s an easy sound to reproduce.

Though you can’t get the male cicada to shut up outdoors, he quickly gets stage fright when handled or removed from his outdoor habitat.  This makes his acoustically compelling song difficult to study.  By mimicking the sound of a female cicada, researchers can wheedle a passionate serenade from the male even under the unromantic fluorescent lights of the laboratory.