What Blood Falls Bacteria And The Amish Can Teach Us About Model Ecosystems
By Stephanie Pulford | April 20th 2009 08:16 AM | Print | E-mail

Stephanie Pulford
When want to understand something complex, we make something similar but simpler - a model.  Models in engineering re-imagine complex structures as sticks, strings, and hinges.  Biology uses simpler living systems, like yeast and mice.  But plenty of scientific questions defy our tried-and-true modeling strategies.  If a system is too complex or too slow for us to accurately simplify, we must wait for a model to present itself.

America’s next biology top model hails from Antarctica.  Thiomicrospira arctica, the bacteria from an isolated ecosystem in under the Taylor glacier, was big news last week for both biologists, geologists and perhaps even astrobiologists.  This extremophile’s unique quirks gave us a rush of information about its evolution and surrounding geography simply because its history has been relatively simple.

Without influence from predators, pollution, and zoological diversity, we can be pretty darn sure that changes in its harsh antarctic environment caused it to become the bacteria it is today. 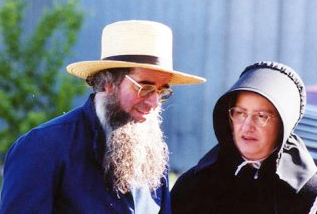 Antarctic bacteria have a lot in common with the Amish.  Both continue to thrive in austere situations that weeded out others of their ilk.  T. arctica lives without light, and so do the Amish, at least at night. And both make food out of relatively gross things-- T. arctica digests sulfur and iron, and the Amish use some form of baking alchemy to turn lard into delicious whoopie pies.


And both populations are sequestered from the muddling diversity of an open culture (no pun intended). Though we can’t put people in a petri dish to create control groups, the Old Order Amish lifestyle has provided us with an excellent substitute. This year alone, Amish genetics were used to shed light on studies of the circadian genes in bipolar patients, hemophilia, hypertension-related genes.

Human study has a series of its own model ecosystems, thanks to isolated communities like the Amish. With the noise of a wide gene pool and lifestyle factors largely quieted, subtle patterns stand out like neon signs.  Take the example of a spate of cases of lethal neonatal deformities.  In the general population, cases of miscarried infants with additional fingers, severe facial deformities, and malformed brains and kidneys would be considered tragic anomalies.

Multiple cases of the same deformities in family members, however, points to a genetic cause.   When six victims were found among close relatives in an Old Order Amish community, it raised a red flag for doctors.  The traits, in total, were caused by a single mutation in an intestinal kinase that has huge implications in the skeletal and endocrine system formation.  This newly discovered syndrome is now known as endocrine cerebro-osteodysplasia, and the consanguinity of the Amish amplified its occurrence and made its genetic cause easy to find.

This is why isolated microecosystems, such as T. arctica’s icy domain, the Galapagos islands, and Lancaster County, Pennsylvania are a gift to researchers.  Tiny, isolated populations show us how a group of organisms interact and change, without many of the confounding influences found in a diverse, uncontrollable ecosystem.

In effect, a closed ecosystem like Antarctica’s buried ice lakes or the Galapagos archipelago increase the signal-to-noise ratio for observers; against a simplified background, stories stand out.