Gun restriction proponents like Vice-President Joe Biden would probably like to restrict abortions too. America is the only civilized country that still allows late-term abortions on demand, but abortion doctors don't rush into schools and go on an abortion spree so score one for abortion fans.

And to be fair, Vice-President Biden doesn't want to ban all guns, he is not convinced by advocacy claims that having loaded guns generally put children at risk - he ironically claims that what he calls "assault weapons" are too hard to use to shoot someone and instead believes we should keep a loaded double-barreled shotgun next to the bed.

It's an interesting hypothesis. A Houston grad student has created an organization to test it - they are giving away shotguns in high-crime areas to see if V.P. Biden is correct. In the San Franscisco Bay area, the police have done a 180 degree turn from what the federal government wants - they are encouraging citizens to shoot mentally ill people who are on a shooting spree rather than waiting for Dianne Feinstein or the police to save them.

If we weren't so arrogant, we wouldn't have to test these hypotheses ourselves, we could learn  lessons by analyzing other country's gun control efforts, like in Europe. Italy is second in Europe in gun murders, though they ban guns.  Switzerland makes all men join the military and then sends the men home with a gun, so not only are guns not banned, they are everywhere, and they are first in Europe in gun murders.  A country that gives them away is only slightly more deadly than a country that bans them? I guess that is a wash so continental Europe can't teach us much after all.

And banning guns hasn't even protected schoolchildren in Europe. 2 of the top 5 biggest school shooting sprees ever were in Germany, tied with the US - Germany had 3 in the top 5 and the US only 1 until the Newtown tragedy. As John R. Lott, Jr., economist and author of "More Guns, Less Crime" noted, on a per capita basis Europe has one less shooting spree than the US per decade. So Europe has already taught us that guns are not the problem, mental health is, Mr. Vice-President.

How about the United Kingdom? The UK bans guns but England, Scotland and Wales hold the top three spots for violent crime in the civilized world.  In America, breaking into a house is a real crap shoot when someone is home - unless a newspaper is kind enough to post the addresses of gun owners, which makes things safer for criminals. That is why there are so few home invasions in America when the person is home.  Burglars ain't dumb. In the UK, home invasions when the person is home are common.

What other lessons can they teach us across the Atlantic? We can learn.

The UK once tried to ban coffee too.  Some worried it would make men too French. By that they meant impotent. 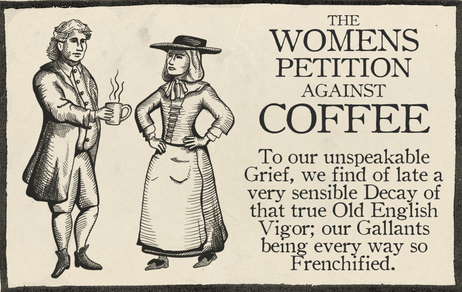 Other elites worried that coffee led to discussion and therefore was a weapon, like a gun, that would shake the citizenry out of their stupor and lead to rebellions against elites. They had a point.  Where were both the American and French Revolutions planned?  That's right, coffee houses. Where did I build Science 2.0? Okay, in my den but I drank a lot of coffee while doing it.

King Charles II shut down all coffee houses in England but changed his mind quickly. There is only so far you can push people before revolts go from academic speculation to scary reality so monarchs and politicians have to tread the line carefully.

In the case of Charles II changing his mind, "I think maybe he recalled that they had beheaded his father," Mark Pendergrast, author of "Uncommon Grounds: The History of Coffee and How It Transformed Our World", told NPR's Adam Cole
Science 2.0
More Articles All Articles
About