Hank Campbell
In many parts of the country there is a recession but some segments are immune to the ups and downs of economic cycles.  Three are obvious; your lawyer, your accountant and hotels in towns where conventions are being held.  No matter how bad things get, they will never lower their rates.  There may be legends of them lowering their rates but, like children who look like bats, they always  seem to be in a third world country: Last year at the AAAS meeting in Chicago, the hotel I got was spectacular.   If you are a cynic, you may believe it's because I went through AAAS as a journalist and the last thing a hotel wants is a journalist writing about a crappy hotel room instead of the conference.  If you are a socialist, you might say the economy was so bad a large corporation proactively lowered their rates despite having a captive group of attendees.   I prefer to think that hotels in Chicago in February just charge less, but it was terrific.

This year the conference is in much more temperate San Diego and, let me tell you, there is no recession here.  Despite claims that AAAS had negotiated the 'best rate'. the price for their official hotels was jaw-dropping at a time when people are losing houses.(1)   It took 15 seconds on Expedia to find a hotel two blocks away (and this is San Diego, so walking is no problem - as a real world example, they have not had a baseball game rained out since 1984) that was 60% of the cost and still had great reviews.   The Horton Grand got the nod - an older building, seemingly rebuilt brick by brick from the original of 1880s, their histories imply.   I like old hotels but despise old furniture.   If you grow up in the country, antiques are poor people furniture and the Horton looks old but has modern stuff, except in the bathroom, where the toilet is pulled by a cord.  But even that is okay. 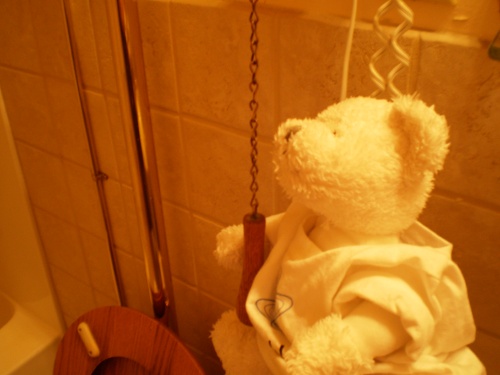 The flight was uneventful, so thanks for that Southwest.   Whereas last year I got to maintain a 15 year streak of never leaving O'Hare International on time, I am not sure I have ever had a Southwest flight be late.  I don't fly them much but I take them when they are cheapest - I like having a seat and I like the individual initiative of schmoozing an upgrade and Southwest has neither.  Still, their record is unblemished.

Press registration was flawless (thanks AAAS) and I checked out the press room accomodations, which are really all you need - computers and free coffee.   I had some time before the opening speech so I walked back to the hotel and saw a Morton's right near the hotel.  Morton's used to be a staple of mine before the cultural fundamentalists in California chipping away at every minor variance from their social engineering utopia managed to get smoking banned without so much as a vote in the legislature.  But a big steak without a cigar afterward just does not feel right so I go out for steak a lot less.

But it's right near the hotel and I had not been at a Morton's in years and a basketball game was on so I had a steak, virtually wiping out the savings on the hotel.  For a time, Morton's at least continued to sell cigars even though you couldn't smoke them but now they don't even do that.   There was a nice cigar bar nearby, I was told.   Not sure if I had the time, I looked over the evening schedule.  At this time last year I was going to see Al Gore and Sean Carroll.  Carroll was terrific and Al Gore was at least memorable, if only because I almost shot coffee out of my nose when he put up a slide so unscientific he removed it shortly thereafter due to the outcry even from academics, overwhelmingly Democrats, in a town like Chicago that is 70% Democrat.

This year we could look forward to ... Peter Agre, AAAS president.   Nothing against Agre, he may have been terrific, but any media corporation with more money in cash reserves than most companies have as revenue does not need free publicity from me.  So after Morton's I instead went to the cigar bar - and it had coffee too!   Tabac is the name and the cigar and the coffee were perfect.  They even had those hookah things that young people like but to people my age look too eerily like big water bongs - I don't need that picture on TMZ.  I talked with the owner about how he was able to sell cigars and have people smoke them inside and he said it was because they were specialty shop and did not serve food.  I was sitting outside anyway because the evening was nice but I think there must be some way to have a restaurant where you can smoke a cigar if this guy can have cigars, water bongs, coffee and pastries and remain open.

The real program starts in the morning, along with the EU breakfast I enjoyed last year, so there should be some science content on the horizon.  Cigars are a pretty good start, though.
Science 2.0
More Articles All Articles
About