Hank Campbell
Are you buying Halloween candy?  Don't you know they use child labor to harvest those cocoa beans?  You went to Chick-fil-A?  So you don't believe gay parents have just as much right to be annoying at a kid's soccer game as everyone else?

It's increasingly the case that someone, somewhere, is going to make a value judgment about you based on what you buy and where. This is the sign of a new, militant mentality made easier by the Internet, right?  No, it is American culture 101.  The first American boycott took place in 1765, because of the Stamp Act, and it so confused and was misunderstood by the English ruling class they lost a whole country 11 years later over it.  We're not as ban-happy as Europe, so we instead boycott, and always have.

200 years after America declared independence, United Farm Workers president Cesar Chavez got 17 million Americans to stop buying grapes, claiming unfair labor practices and poor working conditions by farmers.  Chavez and his followers risked getting clubbed and the boycotters of the 1700s risked getting a .69 caliber musket ball shot into their brains but now things are safer to boycott and, because of that, efforts have become more mercenary to groups that want to exploit commerce for social engineering. The cracks had begun to show even during the time of Chavez. While his grape boycott was successful, because people cared about working conditions, later efforts to foment boycotts if all food was not grown with union labor were far less successful - because people care about people and, when it becomes just another cynical political movement, more and more tune out. 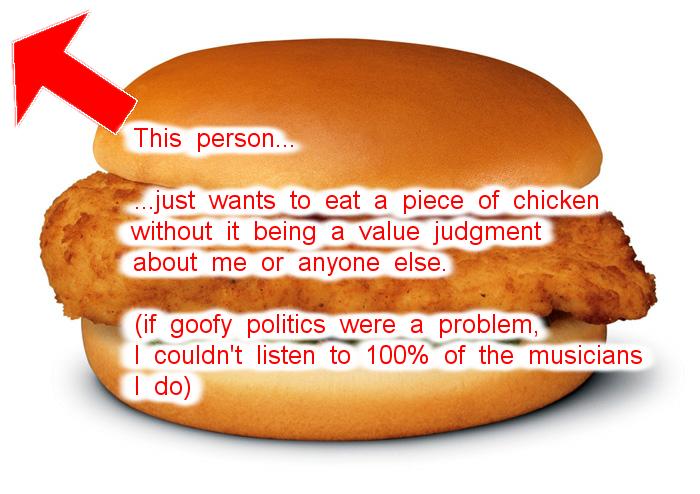 I didn't actually go to Chick-fil-a during the boycott.  Or after.  I have only been there one time and it was fine, I went because I liked their ad so I wanted to check out the food (1).  It was okay, like a hybrid restaurant/fast-food place and the chicken was chicken.  If you want good chicken, go to any street in Taiwan.

People buying 'fair trade' were once quietly making a difference in the conditions of farmers in other countries, now the companies pushing it want to say you are superior for overpaying; their food is more ethical.  And everything else in the culture wars is more ethical too. "The New Normal" television show faced boycotts because One Million Moms objected to its portrayal of gay marriage and so both sides felt like they had the moral high ground.  I don't think boycotters needed to bother - the guy behind the show seems to think that in 2012 you only need to add a gay couple and a Republican saying stupid stuff and a show will be a hit.  I haven't seen less authentic writing about the right wing since whatever the last thing Aaron Sorkin did (2). Seriously, Amos 'n' Andy had fewer stereotypes than what the guy behind "Glee" produces today with a straight face so it will be gone pretty quickly unless the writing improves a lot. Controversies often settle themselves that way.

But these are not simply grass-roots initiatives that catch on.  A J.P. Morgan survey cited by Kristen Leigh Painter of The Denver Post says these 'impact investments' are a $4 billion-a-year enterprise. What happens when everything has an ethical statement on it, and they are all the same? What if all of the food has 'organic' and 'fair trade' and 'no GMO' or whatever other stickers on it?  People will buy the cheapest so ethics matters - but only to a point.

And some people are going to be resistant to getting dragged into taking a side just on principle.  Lots of people went to Chick-fil-A during the boycott not because they are against gay marriage but because they resent having their fast food be a 'you are with us or against us' choice - not everything is a culture war, sometimes it is just a piece of chicken.

I don't expect a huge drop in candy sales this Halloween either.