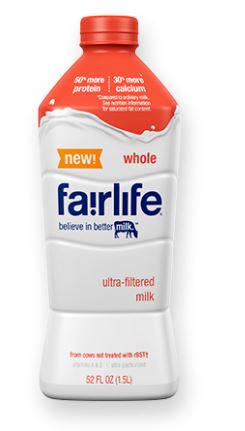 Twelve years ago, the inventors of the process that would lead to Fairlife milk engineered a process to "separate milk into its five key components – water, butterfat, protein, vitamins and minerals, and lactose."

By then recombining the components, they not only removed the lactose, making it digestible with less drama for lactose-intolerant people, but also giving it 50 percent less sugar, 50 percent more protein and 30 percent more calcium.

That's a huge breakthrough. How has the blogging community reacted?

They're calling it the Frankenstein of Milk, which tells us all two important things: First, is that a large chunk of the anti-science community wants to shriek Doomsday about food, so they can follow the Dr. Chuck Benbrook roadmap and parlay a mediocre economics career into a lucrative Big Organic one. Second is that they don't understand science or economics. It is a technology process, just like creating 2% milk, they have not changed the nature of milk. By instead promoting hysteria about it as a Frankenmilk, detractors will cause the same progressives who are against vaccines and GMOs and energy to be against it, to the detriment of their kids who can get a lot of nutrition out of milk but who might be lactose intolerant. The economics issue is more plain: It is darn expensive, 2X the price of regular milk. Whole Foods shoppers are happy to overpay but not if they read "Franken-" about it on the Internet. So a rather brilliant, sustainable company breakthrough is going to be penalized by people within their own cultural sphere.

Anyway, this not a GMO product, though that's hardly the worst flaw in logic they use. As I wrote for the Los Angeles Times, Frankenstein Was Not A GMO either - he was an organic hybrid, the exact thing organic activists say is desirable.