Hank Campbell
How do you demonize scientists who added 3 genes to the 30,000 in rice in order to stop vitamin A deficiencies in poor countries with rice-dominated diets? There are zero pitfalls to it yet an elaborate, well-funded marketing campaign has been leveled against it.

Ingo Potrykus and Peter Beyer genetically engineered their Golden Rice, called that because the genes they used for producing beta carotene, a Vitamin A precursor, gave the rice grains a 'golden' color, and even persuaded companies to waive patent rights so that they could give the seeds away for free.  No 'Monsanto is evil' nonsensical reasoning applies to this, yet 'green' juggernauts like Greenpeace and Union of Concerned Scientists have opposed it by every means possible, using lawyers and, of course, scare campaigns about biology.

How many kids have died in the 14 years this has been protested as "Frankenfood"? Estimates on deaths are always somewhat overblown but activist groups love to throw them around so let's give them one they can think about; as many as 18 million children have died due to vitamin A deficiency while they have blockaded just this one technology and another 18 million have gone blind, according to World Health Organization numbers. Deaths due to GMOs? Zero. Heck, stomach-aches due to GMOs - still zero.

Matt Ridley at the Ottawa Citizen itemizes the manufactured outrage and nonsensical alternatives nicely and gets credit for the bluntness of the title, except he comes right out and says 'kills':

golden rice was a corporate plot (untrue), did not produce enough vitamin A (not true), might cause health problems (a vitamin enriched bowl of rice?), might upset ecosystems (unlikely for a domesticated crop) and that capsules of vitamin A were a better bet (vitamin A capsules still reach too few people).

Well, no one said that reason and research were a part of anyone's agenda against science. We all lament that political discourse is so negative yet when it comes to science issues that go against personal beliefs, confirmation bias and 'the ends justify the means' reasoning kicks in quite fast. People who are against science and the future will invent all kinds of other reasons to mask their true motivations, like being anti-corporate, the precautionary principle, slippery slopes and the goofiest logical fallacy, it can't be 'proved safe'.

Potrykus has been equally baffled by the left's head in the sand on something so obvious, writing in Nature that "Regulation must be revolutionized" (Nature  466, 561 July 29, 2010 doi:10.1038/466561a) - archaic mechanisms exploited by activists are dooming more people than science will and that "I therefore hold the regulation of genetic engineering responsible for the death and blindness of thousands of children and young mothers." 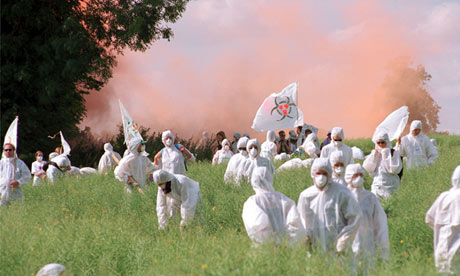 Activist groups love two things; fundraising brochures and buying biohazard suits to wear in photo-ops while they commit acts of terrorism. Credit and link: Guardian, which loves to give publicity to groups that hate science.

I won't just pick on Greenpeace. The ill-named left-wing advocacy group Union of Concerned Scientists, which until recently was run by Kevin Knobloch, a former Democratic staffer, has been unfailingly opposed to every mainstream science position except climate change. Golden Rice was "scientific garbage", according to Doug Gurian-Sherman there.  Knobloch has now gone back to directly being a Democratic staffer, he took a job as as chief of staff to Department of Energy (DOE) Secretary Ernest Moniz. So the good news for kids in poor countries is that he is now dutifully helping to block energy science rather than biological.

UCS knows so little about science they basically think if you eat too many carrots you will die from Vitamin A poisoning. 'It is toxic at high levels' was the closest they got to a scientific argument against Golden Rice, even though it can't happen.

While they promote their 'you need to continue to test this until it is found harmful or you give up' agenda against science, children continue to suffer needlessly and die. Science can fix this. Science has a mandate to fix this. But scientists need to stand up to groups like UCS with just as much unity as they stood with UCS in 2004, when everyone protested irrational blockades of science by the Bush administration.

Obviously it isn't just left-wing crackpots like UCS and Greenpeace who oppose biology. The conservative flagship publication National Review carries a columnist who works for the Discovery Institute, which opposes evolution and is in the scare journalism business about IVF and mean old science in general.