Hank Campbell
Two weeks ago I got a call inviting me to attend one of the inauguration balls for President Obama. But it wasn't to be held in Washington, D.C. it was in Texas.

Texas? you might think, but aren't Democrats irrelevant in Texas, almost as irrelevant as Republicans are in California?

Well, no one is as irrelevant as Republicans in California after redistricting, and Dallas already bans cigars in restaurants, which feels like California.  A Democrat from Houston (naturally) wants cultural mullahs to ban smoking in bars and restaurants in the entire state rather than doing something common sense like, you know, coming up with a ventilation standard and then letting businesses opt out of it by banning smoking in their businesses.

Regardless, somewhere in Texas I knew there had to be one restaurant that still lets you smoke a cigar after you eat a steak so when the producer at Glenn Beck's The Blaze Network asked if I wanted to come to Texas for what they were calling "The Misfits Inauguration Ball', based on my desire to have a cigar after a meal and their description of the event, I had to say yes.

What was their description? An inauguration ball for people absolutely certain not to get an invitation from Democrats to go to Washington, D.C. for the real one. "Science Left Behind" certainly seems to have qualified, since The Cult of Progressive Science says that anyone voting Democrat is both super-smart and pro-science and the Republicans are not. Debunking that idea in a book and showing just a few dozen or so of the ways progressives are anti-science got the kind of reaction I expected from aging, left-wing journalists of the activism mentality who didn't like that I wrote aging, left-wing activist journalists are why no one trusts journalists any more. Noting that the American left's anti-science positions on energy, food and medicine were far more dangerous than something as quirky and weird as the slightly higher evolution denial by the right wing in America really got me on Black Lists.

If there is a Black List I want to be on it, so off to Texas I went, tuxedo in hand.

Tuxedo because, as I was reminded on three different occasions by a different person, this is a black-tie affair. So many reminders about it being a black-tie affair that I wondered to myself, 'By over-reminding a whole bunch of libertarians how they have to dress, what are the increased chances that someone shows up in a tuxedo t-shirt?'

My crafty publicist, Emily, at Perseus Books did not come right out and dare me to wear this, but she sent me the link.

If you are a writer, you may not necessarily want to fly all over the place, especially for free, but they make it nice: car picks you up, plane takes you there, car picks you up, go tape show, car takes you to hotel, sleep, car takes you to airport, plane flies you home, car picks you up - they have ridiculously organized people who somehow handle all of that stuff. The last time I went I didn't even know what airline I was flying and had mostly forgotten what city I was going to - some friends still ridicule me for it, they know I thought I was going to Phoenix.

The trip was uneventful, I arrived in plenty of time. As you might expect, people were jammed into bathrooms, make-up rooms, whatever, to change and then go to hair and make-up. This is a TV show, after all, and the set was going to look like an inaugural ball, but it was still a show. I even brought three ties in case anyone wanted one over another.  No one cared about my ties, I even tried to give one to a producer there, who looked at me like I was asking her to fly it to Cuba - and then gave me a hug anyway.

Regarding ties, one advantage to attending a black-tie affair with mostly (all?) conservative people: they will know how to tie a bow-tie.  Surprising fact: the only someone there who knew how was me. Yes, I even tied a bow-tie for a fellow attendee who forgot to bring one and bought one at the airport, from a store which had no clip-ons. I thought right-wing people had to sign up for bow-tie classes when they joined Big Conservative and were handed their oil wells and a monocle but, nope, apparently they are not one-dimensional stereotypes.  His tie looked terrific after I was done with it, thanks.

The table labels were hilarious riffs on the progressive clichés that get hurled in predictable fashion - I was at the "Earth Haters" table, for example, because I'd like to actually see evidence that fracking is suddenly bad, after 70 years in use, rather than just condemning it first and then making energy companies prove it is not causing the earth to deflate. 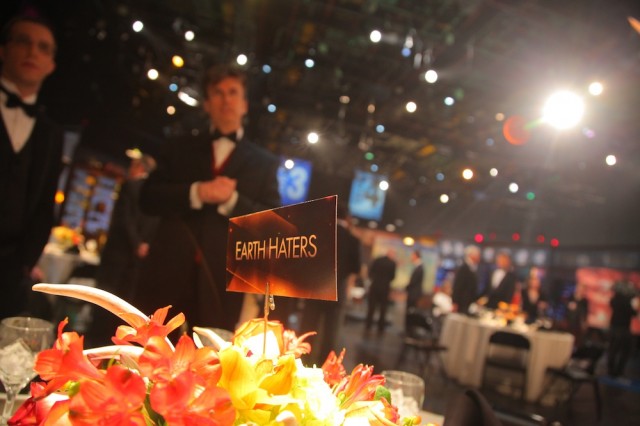 Yes, that is me, with Dr. Alex Berezow on my right. Credit and link: GlennBeck.com

The food was topical for 2012 also; Chick-fil-A chicken and a Twinkie.  Mine was a real Twinkie too, not some knock-off.  The Blaze Network spares no expense.  I am not sure I had ever actually eaten a Twinkie before so I had one that night. Hopefully while the camera was not on me. No food ever gets eaten at these things because no one wants to be on camera eating finger food - and the only thing more ridiculous is eating finger food with a knife and fork, that is sure to get you ridiculed on The Daily Show.

The decor was delightfully non-politically-correct. This inauguration ball also had an ice sculpture, for example, but not the kind you would find in D.C.


An oil rig ice sculpture? I am surprised an eco-terrorist did not firebomb us. Credit: Hank Campbell

At the table also was John Hofmeister, former CEO of Shell Oil, there despite all of the work Shell has done in carbon capture and cleaner energy, where he guided them to being almost 50% natural gas and helping reduce energy sector CEO emissions to early 1990s levels. John knows more about energy and geology science than every activist combined but it seems he must hate the earth if he worked for an oil company at all.

Our table was up first on the show and I can't remember what I said (the clips on their site don't show my segment) - I just riff on whatever the topic is, in this case the irrational modern environmental crusade against fracking. We can't reduce CO2 when activists lobby against literally every alternative energy solution possible today and insist rationing, mitigation and taxes will save us.

After filming was done, we got to mingle for a bit. I had a chance to see my old Congressman and then Senator from Pennsylvania, Rick Santorum. I introduced myself and told him I was one of only two people in that room who got to vote for him in both those jobs and he laughed. He got a lot of flak during his run for the presidency, his positions on social issues were likely too far out of the mainstream for 2012 voters, but in an era when we constantly criticize politicians for catering to the latest opinion polls, we have to admire someone who believes what he believes and is not switching to get a bigger share of the pie. Even if you don't agree with him, he is a man of integrity and that is rare in politics.


I don't remember what we were joking about but you can obviously tell which of us three is an experienced media professional enough to know when to shut up - the Senator. Credit: Ummm, I forgot who took this. A nice lady in a spectacular dress, I am sure of that part. Alex Berezow is on his right.  The Senator wore cowboy boots and yet they told me I could not come dressed as the Second Amendment. Go figure.

We got a picture with the host also. It turns out he ties his own bow-ties, which makes him a real mensch, but where was he when ties needed to be tied before the show?  Drinking oil, or whatever activists say keeps libertarians alive.  He said to me, "I have been told by 4 people I need to read your book. I am going to ask Pat and Stu (other hosts, I was on their show last month) to give it to me even though I know they probably put it on my desk a thousand times by now."

In this picture, I am rubbing his back to soothe him into having me on his radio show, because science is a libertarian endeavor, for as much as progressives may hate to believe it. Like everyone else who has read the book with an open mind, he will like that it is not a right-wing attack book, it just shows the examples where the left is anti-science in many ways and with hundreds of citations. So going on his radio show will sell about 10,000 books because there are no bigger fans of science than libertarians. That stat is also in the book, thankyouverymuch.


Glenn Beck, Hank Campbell, Alex Berezow at the 2013 Misfits Inauguration Ball. Credit: unknown, but it was on my camera, so thank you fellow attendee.

After that, we got a ride to a spectacular hotel in Irving, the Omni Mandalay.

An airplane ticket, a limo ride and a top quality hotel?  That is the antithesis of capitalism, where hoarding money, paying no one and exploiting the proletariat is the order of the day, right? No, it is the essence of capitalism to treat people well.  If you want to get treated cheaply, deal with someone claiming to be a non-profit saving the world. They are all getting paid yet expect everyone else to do everything for free because their cause is so awesome.

The Omni Mandalay even had a shuttle that took us to the Cool River restaurant, which satisfied my desire to find a place where someone could eat a steak and smoke a cigar without being huddled by government forces into a ghetto. The Cool River was terrific on all counts.

You know how Scrooge McDuck looks when he is sitting on a pile of his money?  Or me when I see my hair in the mirror?  That is how Alex looked once he discovered the awesome power of a cigar after a steak. I tried to get him to snap his glasses in half and make a monocle but cigars and inauguration balls can only accomplish so much.


Alex Berezow in a tux with an Arturo Fuente cigar at the Cool River restaurant in Irving, Texas.  If that isn't a right-wing stereotype waiting to happen, I don't know what is.  I wish I could embed a maniacal laugh into images. Credit: Hank Campbell, who had an Avo Uvezian.
Science 2.0
More Articles All Articles
About