I got a private message from Gerhard Adam which went "I'm getting used to being called a moron, etc. but why do they have to pick on the cowboy hat?"

Why indeed?  Hats used to be cool but they don't even wear them on "Mad Men" any more.  Hats are out of vogue even on fake romanticized shows about our past.

The official Science 2.0 hat from this day on.

We shouldn't hate the hat.  I mean, to do so is a downward spiral culturally. Consider the case of Trayvon Martin, the 17-year-old Florida high school student who was shot and killed Feb. 26th. He apparently died because he was wearing a hoodie, which is kind of a hat that was basically popular in...2004.  Okay, I am not sure why any young person wears a hoodie at all in 2012 but that isn't the point. He was wearing a hoodie and he died and now a whole bunch of people are wearing hoodies as a show of solidarity, even though I am betting they would lock their doors if a teenager in a hoodie were standing outside their house. The Unabomber would be proud.

A member of Congress even tried to wear a hoodie on the floor and was ejected. What kind of intolerance is that?

So I agree with Gerhard that people should not pick on his cowboy hat, and so I am unilaterally declaring it Gerhard's Hat Day and demanding that all contributors wear white hats. The audience too.

In honor of this occasion, his hat will also get its own account on Science 2.0 and begin comments with phrases like "Part of the problem here is that to ascribe such intentions then makes the concept of X so vague as to apply to almost anything" and "The way I view these basic definitions" - in other words, it will be vague but polite when eviscerating people in 400 words instead of taking only 20.

Let's Gerhard it up, people.  Western culture needs you. 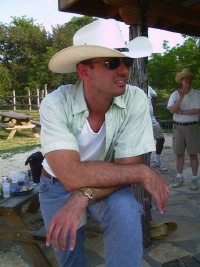