Hank Campbell
A running meme throughout most of my life - and I came of age in the late 1960s and '70s, when pot was all the rage - is that people get stoned, then they get hungry. Any number of media portrayals showed it, and still do now. No surprise, marijuana is the most commonly used non-legal drug in America, so references to it resonate with a lot of people. And the munchies after smoking it do as well.

Inference: You should probably get fat if you continue to smoke marijuana into old age.

While I am fine with harmless stereotypes and ridicule - they resonate as humorous because there is a kernel of truth (so keep your microaggression and safe space whining and stop being a baby) - I like it even more when they are overturned. A new clinical research paper in The American Journal of Medicine does just that. They found a substantial difference in metabolic syndrome (a cluster of risk factors like high cholesterol, high blood pressure, obesity) among marijuana users and those who never tried it.  A difference of over 40 percent.

Yes, people who are considered more likely to eat a whole bag of Doritos are actually healthier. 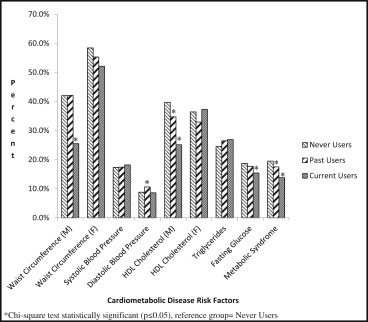 Just under 8,500 people (excluded: other drug users, pregnant, diabetics, people who did not complete the drug questionnaire) who had participated in the National Health and Nutrition Examination Surveys were categorized as current, past or never users. Overall, the difference was substantial - 13.8 percent of current users versus 19.5 percent for non-users. The differences were greatest in the youngest (<20 percent current users) and oldest (6.4 percent current users.)

As I was writing this, Dr. Lila Abassi, Director of Medicine at the American Council on Science and Health, was standing in my doorway.  So I told her this alarming fact and asked what she thought. "I don't know," she said, "Maybe there's a biological pathway to insulin resistance. I don't want to talk about that, I'm hungry."

Okay, she pulled that out of thin air, but if the correlation holds up, there has to be a biological relationship. Regardless, I don't even like to take aspirin so I am not going to smoke the stuff as part of a new fad diet. Still, it is making me rethink the stromboli I asked them to bring me back from lunch.
Science 2.0
More Articles All Articles
About