Hank Campbell
In 1993, Senator Daniel Patrick Moynihan gave us "defining deviancy down", a clever bit of alliteration based on the work of sociologist Emile Durkheim from his defining work of 1895. Durkheim wrote that crime is normal, it is going to happen, but by defining what is deviant, a community decides what is not and creates a reasonable standard for living together.

I've been thinking about that because the Auschwitz German death camp in Poland was liberated by Soviet troops 70 years ago last week. And this week another former Nazi officer has been indicted for war crimes there. Oskar Groening is being charged with 300,000 counts of accessory to murder because he was a bookkeeper tasked with hiding money and luggage of gas chamber victims. Though in the past only people who committed atrocities were convicted, the trial of John Demjanjuk in 2011 found him guilty for war crimes by being a guard so Groening is sure to be convicted.

Just having been at Auschwitz is enough today - but that was not always the case. Though it was painted a bit more simplistically 70 years ago, we allowed more recently that there were Germans and there were Nazis, there was the Germany military and then there was the SS. Everyone shares some blame but though Erwin Rommel was Commander of the Führer escort headquarters during the invasion of Poland, his units never committed any war crimes there or in France or North Africa and when the Nazis later ordered that Jews be killed, he defied them. He was a Nazi but he had been a professional solder before Hitler started wrting Mein Kampf in Landsberg jail and he stuck to his oath. Professional oaths are supposed to supersede politics and the military is one of the five professions, along with education, engineering, law...and medicine.

When most people think of Nazis and Auschwitz and medicine, they think of Dr. Josef Mengele, an anthropologist and medical doctor who studied both to deadly effect with no ethical limits, because he regarded Jewish and other prisoners as non-human. Though eugenics was a popular notion among elites of the time, (everyone from Supreme Court Justice Oliver Wendell Holmes to science-fiction writer H.G. Wells to economist John Maynard Keynes) because they regarded science as the way to do social engineering, Mengele is the one who truly became the poster child for the perils of unchecked human experimentation. The horror stories of the atrocities he committed in the name of science have become legend.

Mengele escaped to South America so the people of Auschwitz and the families of those murdered concentration camp victims were frustrated in their desire for justice. But he was not the only Bavarian Nazi SS doctor in that camp and they had every chance to exact revenge on the other one, whose name was Dr. Hans Münch. 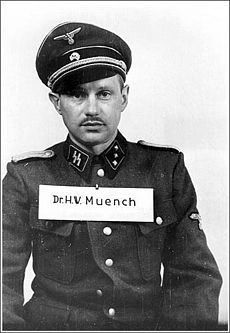 Instead, Münch  became the only person acquitted of war crimes at the 1947 Auschwitz trials in Kraków. Inmates even testified for him, calling him the 'Good Man of Auschwitz' while 40 others were condemned. The charges against him were human experimentation, like they would have been for Mengele, but inmates noted in his defense that his 'experiments' were harmless and ongoing, because he knew once experiments were done the subjects would be killed. His documented experimentation was a ruse to keep people alive, they told the court. He also refused to 'select' anyone for the gas chambers or for experimentation with Mengele. Like with Rommel, his professional oath trumped his belief in government.

Yet passions were running high in those trials, it would have been easy to send him to death in a fit of revenge against all Germans.

That didn't happen. The survivors remembered the many efforts he had made to keep people alive. Deviancy may have been a little relative in the aftermath of World War II - compared to Mengele, you had to be a pretty bad guy not to look good by comparison - but the jurors and the public and the former prisoners who testified on behalf of Münch showed that grace can be defined up, even in the aftermath of the Holocaust.

Münch took a bit of a reputation hit near the end of his life. He said bizarre things in complete contradiction to his post-war efforts, things that would be dismissed if it were someone with Tourette's or dementia, but cultural jihadists nonetheless put him on trial. As it turns out, he did have dementia. For all we know he could have been replaying things Mengele said to him in 1944.

Nonetheless, a French court convicted him in absentia of "incitement of racial hatred", showing that French of 2001 lacked the wisdom the Poles in the Auschwitz trials in Kraków had in 1947.
Science 2.0
More Articles All Articles
About