Hank Campbell
The political attack site PRWatch, one arm of the dark-money funded group self-named as the Center for Media and Democracy (CMD), is run by a former attorney for the Clinton administration which slashed funding for real science in the 1990s (1) while promoting junk environmental claims about ethanol, so it's no surprise CMD hate pro-science groups who don't cater to the environmental scaremongering CMD gets paid to do.

When you can't dispute the evidence, attack the scientists producing it and, if you are catering to one political demographic, also invoke a Vast Right Wing Conspiracy.(2) That is Attorney 101.

Hey, Attorney Lisa Graves knows she has to pay the bills and if she wants to keep those donations rolling in for SourceWatch and US Right To Know and the other science Denier For Hire movements she advises, she has to cater to the demographic that hates science. We know who they are, everyone knows who they are, and she is smart for following the big money. Combined, Natural Resources Defense Council, Environmental Working Group, Greenpeace, etc. are a $1 billion per year science denial industry. She's not wrong for grabbing the big bucks when the pro-science side is 1% of that.

She may be dishonest, but she's not stupid. She is, however, lacking in class. Here is Attorney Graves ridiculing the deceased founder of ACSH, Dr. Beth Whelan, because, really, unless it is lying and ridicule, Attorney Graves has nothing to offer the world: 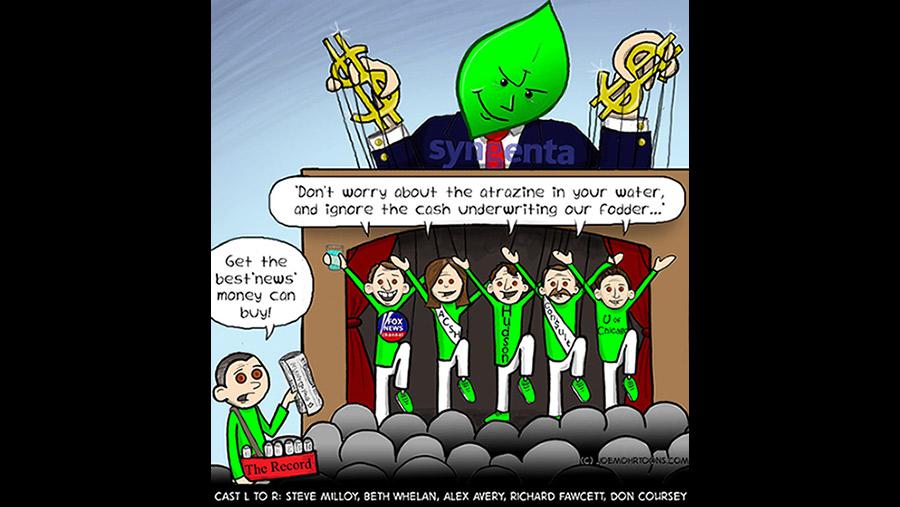 Tacky? Of course it's tacky. Everything about CMD shrieks going into the gutter for attention.

Now,  Attorney Lisa Graves is fond of hurling invective for her clients but any time someone criticizes her she pulls out her "I'm a lawyer" card and threatens to sue them - when she is not engaging in libel.

Not just a lie. Libel. And USRTK is not shilling for industry? All of their funding comes from industry reps. Or maybe she believes corporations only control thoughts and actions on the pro-science side.

Not just a lie. Libel. And unblemished? Disclose where that $500,000 in dark money came from.

Such bullying tactics have been put to good use against academics, that is why she has US Right To Know - an actual industry front group, whose corporate trade group members have also written an alarming number of articles for SourceWatch - using Freedom of Information Act requests to harass every prominent agricultural scientist in America.

It won't work here. Especially because unlike her cartoon above, she is the one dancing on the strings of anyone who will cut her a check. Heck, she will even pretend she doesn't know who is cutting her a check, as has been discussed in pro-science circles for years.

Her latest salvo is to call the American Council on Science and Health, which I run, a chemical industry front group. Why? Who knows, her article is a mess of conspiracy theory and hyperbolic speculation, along with a tacky cartoon about a deceased woman - a woman with 28 books to her name, so clearly someone whose lawn Attorney Graves was never even qualified to mow much less debate about science. Her wacky conspiracy tale is that the EPA put up an article on a pesticide and then took it down because of something I did. It's weird she chooses to invent new stories about the Council, but then But Mother Jones and Newsweek have both been busted trying to intimidate science journalists into not using us as a source, so one of their corporate handlers must have told them to go after us.

Unlike in science, attorneys don't have to prove anything, all she has to do is claim it and then insist I have to somehow prove I am not getting the money I am not getting. Where is Dupont on my donor list? I can't find it. Who are all these gigantic chemical companies funding me according to Conspiracy Theory Central and why are they not actually funding me?

Maybe, just maybe, she is right and it doesn't matter. Maybe, just maybe, no one is paying her to say something specific, they just like the work she does, and maybe they want her to keep on doing it. Maybe, just maybe, if you are not a hate-filled junkyard dog demonizing scientists and doctors who happen to accept science even if you do not, you might also concede that other groups also get money from people or groups who just like what they do, and are not actually controlling what they say.

If that is not the case, Attorney Lisa Graves has to accept that the world should accept that she has been paid specifically to write a hit piece on us by an environmental group or corporation. And she should disclose who that is.

Which is it, Attorney Graves? Are you paid to be a Denier For Hire and therefore you are being a hypocrite when lying about the work of science groups, or should you accept that donors are not controlling what others say any more than they tell you what to write?

(2) As part of a major investigation in 2012, the Center for Media and Democracy's PRWatch documented Syngenta's PR plan to hide behind chemical industry front groups, like the self-named "American Council on Science and Health" (ACSH) to try to sway public opinion.

She may be a competent attorney but she is a terrible writer. What does "self-named" even mean? Center for Media Democracy was a name handed down by Zeus and not self-named by the person who started it? And her source for her supposed expose on us was a stolen document published by the fringe political magazine Mother Jones, her group did no real work of any kind. Somehow she still made sure their blog post about us declared the pesticide company Syngenta - from Switzerland - was a "lifeblood" for the American Council on Science and Health.

Their donation? $20,000. 1% of the donations. What a ridiculous assertion, especially because CMD does not disclose its corporate donors. ACSH was basically penalized for being transparent about its donors - that is something Lisa Graves makes sure does not happen at her company or by now we'd know who is funding them.

(3) Groups who watch SourceWatch say she is funded primarily by political activist George Soros and far-left foundations. There are a lot more billionaires funding environmentalism than funding pro-science groups but I suppose the right-wing equivalent would be the Koch brothers. Who has never given me any money? The Koch brothers. Probably because we are just science and no politics. And having a political agenda and being anti-science is likely why Graves has gigantic secret donors on the side of the aisle she is on.
Science 2.0
More Articles All Articles
About