Hank Campbell
A few years ago, bees suddenly had a sharp decline in numbers. This "Colony Collapse Disorder" as it is called, is a disorder in the sense that it is a recurring phenomenon, detailed for the last 1,000 years even when record-keeping just consisted of sporadic anecdotes. It was noted more frequently as record-keeping became more thorough. so it appeared far more often by the 1800s. By the 1900s, record-keeping had improved enough that there were seven recorded instances of this CCD phenomenon just in the United States.

But the cultural landscape was much different by the end of the 20th century, environmentalists emboldened by their "Silent Spring" political victory over DDT in the 1970s became a true well-funded, political action force. Like any political group, they need to show their donors they can win once in a while. In 1995, after another colony collapse disorder incident, the issue got enough attention that they called on governments to mandate something safer and governments told companies to do it.

You know what? I agreed with them. By 1995, why wouldn't we replace broad spectrum organophosphate pesticides in those scenarios with something selective? We could reduce spraying 5X if we had something that was terrific against sap-feeding pests, beetles and more yet didn't impact mammals or bees or drinking water. My only concern at the time was probably the same as yours, if you have been around Science By Activism long enough - a rushed-to-market fix might be worse than the problem itself. I lived through environmentalists getting MTBE mandated in 1990 and then in 2005 environmentalists who had lobbied throughout the 1990s for ethanol got their wish, and that is also worse for the environment than plain old gasoline.

In hindsight, my worries on bees were unfounded. Scientists rose to the challenge and the new "neonicotinoids" they created went one better than their predecessors, because they were based in nature - namely on the mechanism of nicotine, which acts on specific receptors in the nerve synapses of some insects but is harmless to anything else. Nicotine has long been heralded by environmentalists as a natural alternative to synthetic pesticides, so it was the perfect solution for everyone and environmentalists cheered the victory. I was among them.

But environmentalism is a business like any other business - someone is signing the fronts of checks and a bunch of people are signing the backs of them and to keep that going, money needs to keep coming in. Like any business, if they don't have a new product to sell they do marketing to make customers buy more of what they have. So this breakthrough product class that was terrific against targeted pests in the late 1990s was turned on in 2006, when another CCD happened. It wasn't a grass roots movement, environmentalism is a lot more mature now. While the original scientists in the environmental movement happened to agree based on evidence, the next generation had never been traditional scientists, they had instead been steeped in Science By Activism for their entire careers, it is why they went into science - so rather than create a hypothesis and do studies to find answers to why bees were dying, this Next Generation went straight to the conclusion and conspired to create a ban. I discussed their template last year in When It Comes To Neonics, Activists Understand PR Better Than Chemical Companies Do:

(1) Write a review of "friendly" papers to make it seem like science.
(2) Recruit a big name 'experienced in publishing in high-impact journals' to be the lead author.
(3) Queue a bunch of supporting papers in lesser journals to appear afterward, supporting the big-name one, to drive up its citations and impact factor.
(4) Get a large environmental group to buy in after the papers show 'evidence'.
(5) Lobby politicians with the stack of 'studies' they created and get a ban.

We may like to think corporations are masters of spin but there is no corporation anywhere near as skilled at deception and manipulation as these environmentalists. They published their road map on the Internet by mistake and left it up for years and Bayer still didn't have a clue how to stop them. It didn't all go to plan, of course. This group had targeted World Wildlife Federation (WWF) as their dupe, because one of the conspirators used to work there and knew their internal workings, but the WWF didn't fall for it, nor did they get into any high-impact journals, but their effort still paid off, just not for the environment - some countries have limited neonics to spraying on plants rather than seeds, which is probably worse for the environment than spraying on seeds because it takes more.

Lost in the manufactured hysteria is the fact that there hasn't actually been a collapse.

If neonics caused CCD, it would have happened in Australia also, since they use them just like everyone else, yet it did not.

There was a blip in the west, but if it were a pesticide problem it would be happening everywhere and it would be recurring. Across non-advocacy science, numerous studies have found that the issue is what it usually is - parasites and disease - and could possibly be due to climate stress or, since amateur beekeeping has become a huge fad, malnutrition.

The problem is that no one can say for sure, and doubt is how anti-science groups work their fundraising magic. A new study funded by the United States Department of Agriculture ARS Bee Research Laboratory, the U.S. Environmental Protection Agency, the Foundation for the Preservation of Honey Bees and the Maryland Agricultural Experiment Station, adds to the weight of evidence that environmentalists are attacking the wrong problem. The work in PLOS One used the first neonicotinoid on the market, imidacloprid (Bayer), and finds that bees won't undergo a Colony Collapse unless they are exposed to 20X normal exposure levels of neonicotinoids, and that is just not happening. Not anywhere.  Yes, some amateur beekeepers are quite incompetent - one high-profile instance touted by environmentalists as evidence for a beepocalypse was just someone who was raising bees as a fad and screwed up, an investigation by the Oregon Department of Agriculture showed - but every single group big enough to need neonics in the first place is not wasting their money so stupidly.

University of Maryland entomologist Dennis vanEngelsdorp is quoted in the statement on the work but was not part of the study itself. “It’s not surprising that higher levels will hurt insects. They’re insecticides after all. But this study is saying that neonicotinoids probably aren’t the sole culprit at lower, real-world doses.”

They weren't really even real-world doses, unless in the real world the people spraying this stuff have an unlimited amount of money to spend. To get any effect they had to give the colonies food tainted with insecticide for 12 continuous weeks - that can't happen in nature, plants getting this sprayed on them do not bloom for 12 weeks - but to get a real effect, like trouble producing healthy offspring and surviving through the winter, they had to basically soak food in it. It's good to establish a solid No Effect Level but it is too high to be considered a real-world parameter.

“Everyone is pointing the finger at these insecticides. If you pull up a search on the Internet, that’s practically all anyone is talking about,” said lead author and University of Maryland emeritus professor of entomology Galen Dively. “This paper says no, it’s not the sole cause. It contributes, but there is a bigger picture.” 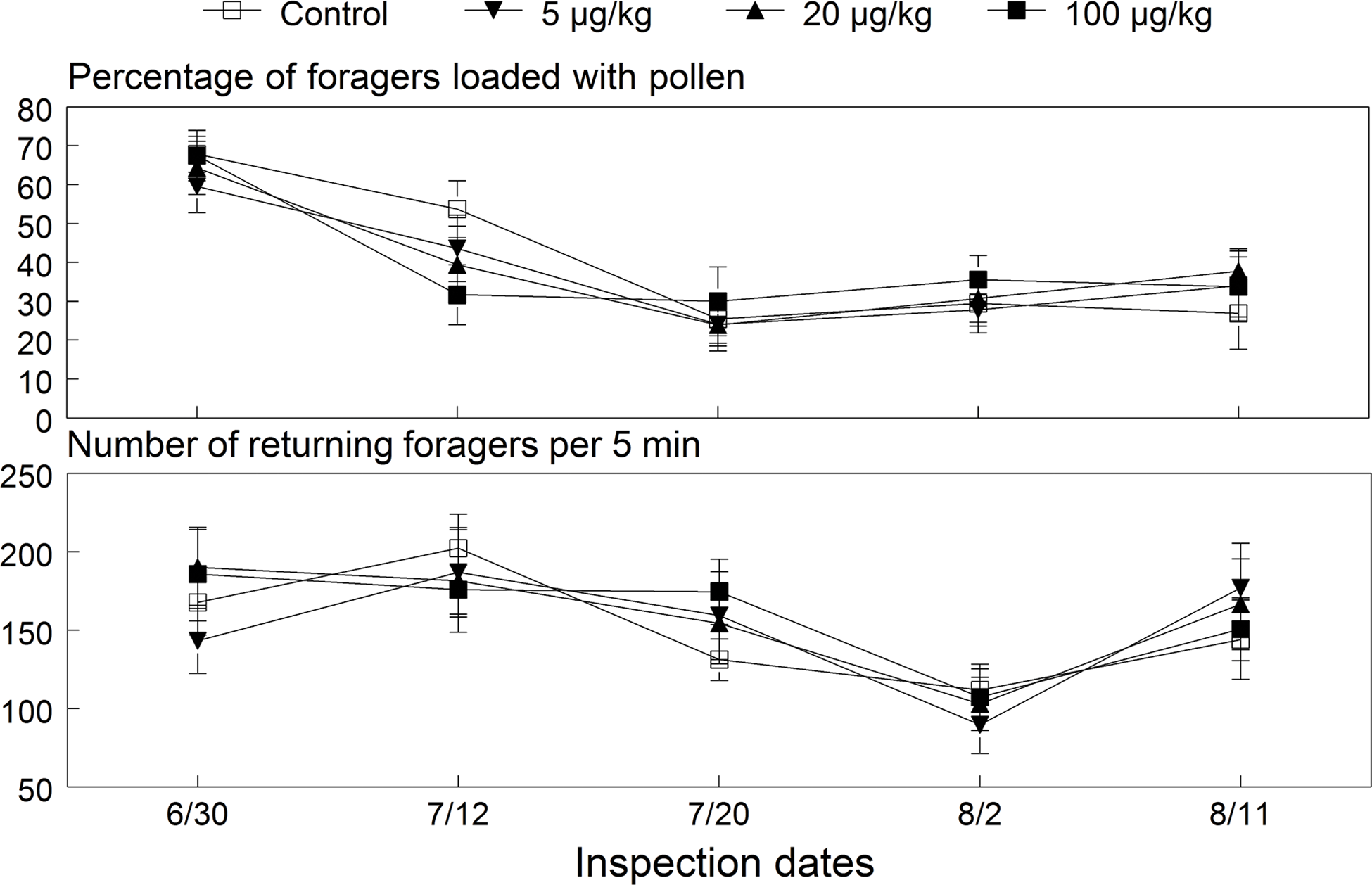 Mean (±SE) percentage of foragers with pollen pellets and the number of foragers returning to the 2010 colonies exposed to untreated or imidacloprid-spiked diet patties. Credit: doi:10.1371/journal.pone.0118748

The bigger picture is, of course, parasites and diseases and, given the geographical nature of some of the issues, climate-related. Bans on neonics would be a win for environmental fundraisers but not help us at all.

"It contributes" is the language of science. Few researchers will speak in absolutes but 20X is a safe bet. However, the paper won't end the debate because anti-science groups will only see "it contributes" and insist they are right.

Will even more evidence showing that we are vilifying the wrong things matter in future American policy? When it comes to environmental science, the Obama administration has a rather poor track record - scientists who work for the government are forced to keep doing the same study over and over in hopes they will produce a result he prefers, like in efforts to find environmental harm with the Keystone XL pipeline proposal that have been redone multiple times since 2009. His Pollinator Task Force was created to find something to blame for bee deaths and you can't have press conferences banning varroa mites, so regardless of the evidence, scientists expect neonics will get blamed - or else a new committee will be told to start over.