Hank Campbell
In the early part of the 20th century, after we had entered the Age of Flight, a strange phenomenon in Arabia was sighted.

Air travel had become more common and thus so did air delivery. British pilots flying from Cairo to Baghdad reported seeing ruins that no one had ever noticed before.

Visible from the air, in the middle of an unforgiving desolate place, were "kites" - well, walls that were vaguely shaped like kites - and they stretched for miles. This was before the UFO craze so there was no speculation about extraterrestrials, there were instead questions along the lines of anthropology. Who would build walls that went for miles, and why? Since there was no evidence of cities around, why would anyone build walls that were so long? If the walls were giant pens for animals, what must the climate have been like? If it wasn't that black desert all around, why would they need enclosures? If it was desert, why live there? Bedouins called it Bilad esh-Shaytan - the Land of Satan - due to its inhospitable makeup. Today we call it Jawa.

It turned out to be a lot more than some walls.  Svend W. Helms, whose 1981 book is the title of this article (it always stuck with me because it sounds like it should be in a Robert E. Howard story) and colleagues eventually found a city ruins covering over 20 acres buried in the sand, complete with canals, solid floors, artwork, ceramic containers, walls and, of course, the "kites."

But the finds led to more questions than they answered - even when it was built is shrouded in the mists of inference. The ruins were basalt, courtesy of nearby extinct volcanoes, which can't be carbon dated, and there were no bones. Some of the artwork was things like longhorn cattle, and people vaulting over them. Due to the architecture and triangulation regarding the knowledge of the Levant (eastern Mediterranean), the site is considered Early Bronze Age, around 3,000 B.C.

The questions arise because the Early Bronze Age was probably a pretty good time to live in the larger cities of that region, there was government and art and literate societies and irrigation and large-scale public works. So why would anyone live in Jawa?

Our old friend numerical modeling probably has some of the answers, at least about what it made it possible to live there. The Council for British Research in the Levant, the University of Reading and University of Bristol used Wadi Rajil in Northern Jordan for parameters in creating a water supply that had to have relied on rainfall. As inputs for their Monte Carlo analysis, they estimated water delivery from rainfall catchments and local storage ponds and by damming up and diverting the Wadi Rajil and then calculated the water demands for people, farming and livestock.

Paleoclimate data shows that while the temperature hadn't moved around a lot since the last Ice Age, precipation had varied by a lot. It was considerably wetter.  Even the Dead Sea was not so dead then.

Their conclusion: In good climate times, it could have supported 6,000 people, which certainly makes sense for a city of that size.

Given that its climate was a lot more tolerable then, why didn't more people move out there? Some speculation is that the residents of Jawa had been exiled from somewhere else. Speculating even more, since Jawa was primarily built out of basalt that can be naturally magnetized, ancient people could have figured out how to make things levitate.

Yes, maybe they were thrown out of other places for being some sort of wizard cult. If so, is George Lucas a member today? It can't be coincidence that his sand people in "Star Wars" were called Jawa. George Lucas, Apocalyptic climate change and levitation too? Maybe this belongs in a Conan book after all. 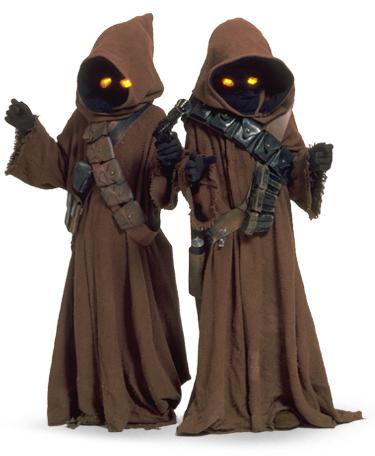 Jawas. As we saw again with Jar-Jar Binks decades later, George Lucas had a startling tendency to stereotype up his characters. Credit: StarWars.com