Hank Campbell
People for the Ethical Treatment of Animals (PETA), is always in conflict with itself. While it claims to care about animals, it also kills about 90% of the animals it takes in. While they advocate less meat consumption, the people they rally around that flag abuse animals with dietary quackery and forced ideology, like the recent case of a dying kitten who was non-responsive when brought to a veterinarian by its vegan owners - who told them a diet of potatoes, rice milk and pasta was killing their cat.(1) The posturing of PETA members overall is cloying, but nothing like most vegans.

Obviously many members of PETA are vegetarians - they are not so bad, mostly because the bulk of them are kidding themselves and us.  In a CNN nationwide poll, 6% reported being vegetarian and yet 60% of those vegetarians have actually eaten meat in the last 24 hours. I don't mind going out to lunch with a vegetarian, we can order just one regular meal and I can eat the actual food and they can eat the leftover stuff on the plate that my food ate while it was living to grow into bigger food.

But they are really the moderates in the anti-meat religion. While Vegetarian is kind of like Christianity, that overall anti-meat religion has created numerous sects, such as Pescatarians and Fruitarians and Vegans. And like some sects, if you leave, you have a target on your head. The Ex-Vegans group promises to scourge those have "regressed from moral consistency to moral depravity" in their holy fire.

Meat eaters also love their fellow humans a lot more. Though Vegans are a tiny 2% of Americans, 23% of meat eaters say that vegan options are important on menus. Meat eaters support vegan choice while most vegans despise anyone who actually follows nature.

I did an informal poll of one guy in the coffee shop this morning to see if those Gallup Poll results hold up. The fellow next to me was eating the kind of breakfast humans evolved to eat, with bacon, eggs and whatnot and I asked him what he thought about vegans and he replied:

"I love vegans! I keep two in the freezer, for special occasions."

PETA somehow mostly escapes the controversy that goes with abusing animals by their acolytes because they keep vegans in their midst quiet and they spend a ton of money on marketing. Women who love pets and are educated by advertising when it comes to biology love to frolic around in skimpy clothes too, which is good good marketing:

Yayyyy, they showed us the puppies! Credit Imod.co.za

Evolution lacks a giant PETA-style fundraising corporation that creates brochures and magazine spreads with actresses in them. I did manage to find one science advocacy poster that had a girl eating a hot dog, so meat eaters are at least starting to understand consumer public relations and framing the way PETA always has -  or meat eaters finally found a girl willing to have her picture taken: 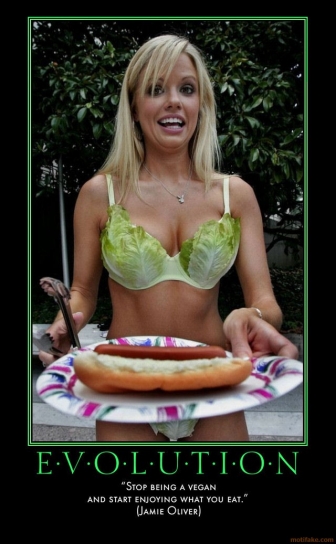 (1) Cats are obligate carnivores. As Dr. Ross Pomeroy at The Newton Blog outlines, the ideal diet for a cat is 52 percent protein, 36 percent fat, and 12 percent carbohydrate.
Science 2.0
More Articles All Articles
About