Hank Campbell
Sid Salter, director of public affairs at Mississippi State University, writes in the Jackson Clarion-Ledger that labels have gone too far.  He is worried about a bill from Democratic State Senator Bill Monning, which would put a warning label on soft drinks and other sugary beverages. A Democrat engaging in social authoritarianism barely even gets noticed in this state so it won't be big news unless people start paying more for Big Gulp's. We love to slap warning labels on things and declare it will save $120 billion in health care costs or some other suitably cosmic number.

That is why every business has a 'been known to cause cancer' warning label no one notices except the attorney behind it who got rich getting that pushed into law.

But I disagree with Sid, I don't think labels have gone far enough. I want to know everything about my food.  Why should something as important as food have less detail about its genesis than my luggage does? 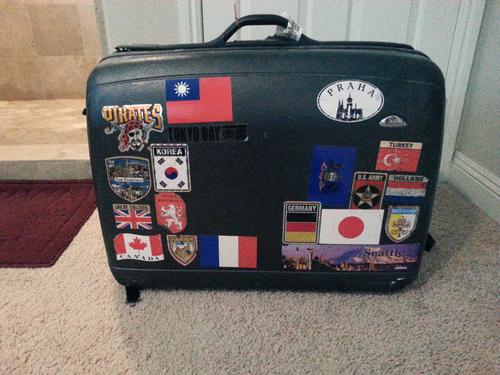 This luggage lasted one trip before the lock went bad but since it was on sale I couldn't return it and the Samsonite store couldn't fix it or replace it. I continued to use it anyway because I paid a lot for it, but Samsonite is not the quality brand it was considered when I was a kid. Now I keep it in the closet, with clothing from 30 years ago that has some sentimental value, and I buy cheap luggage at Wal-Mart instead of expensive luggage from a store. Credit: Hank Campbell.

That luggage can tell you everywhere I traveled during one period of my life when I used gigantic hardshell luggage. Why can't my food have labels telling me who grew it and where, and what pesticides it used, and what is in it? It's about awareness. And awareness should apply to everything equally, no exceptions.

The residents of Portlanda have the right idea with their organic chicken:

Justice is supposed to be blind and if you don't go after all groups, you can't go after any. So if a product is dangerous to people, food that contains it needs to warn them. That is why eggs have to warn you they contain eggs. But that is not enough. I don't just want to know my products contain eggs, I want to know how I can buy egg-free eggs. That is the big trend now, claims like "all natural" are very 2006. We want to know all of the things food does not have.

Plus, eggs are scary. Look at this list of chemicals in eggs. Why should eggs get a free pass in labeling initiatives? 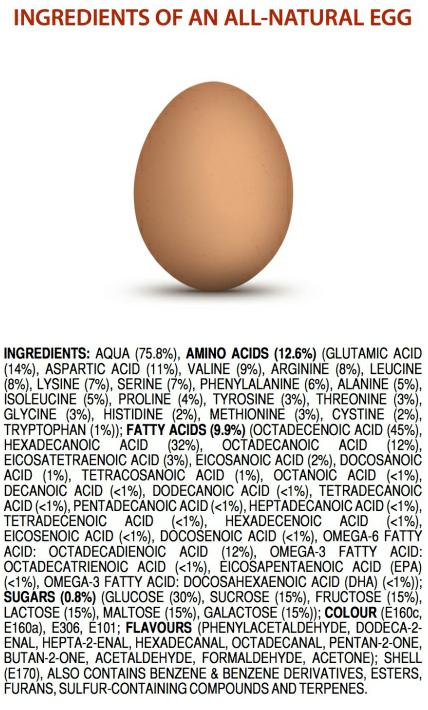 Look at all of that stuff. Egg-free eggs are needed. Credit and link: James Kennedy

Equality is why George Lucas spent so much time and money going after teenagers who created Star Wars fan fiction. Lack of equality is why California's Proposition 37 initiative was a flop. It had a politically sympathetic public - our citizens overwhelmingly support President Obama and Nancy Pelosi and don't like vaccines or nuclear power so we are the perfect organic customers - but people don't like a lot of exceptions in labeling laws. Having a GMO labeling law that exempted organic food, restaurants, alcohol, bake sales and everyone else who did not compete with Whole Foods looked ethically suspect.

But the overall trend in food is going even more California than California, according to new research that consists of surveys reaffirming what food marketing departments want to hear. Artisan food lovers of April 2014 are done settling for gluten-free and HFCS-free and GMO-free, they want everything to be free from everything - and they want it to be egalitarian.

Innova, the company behind the 'people want free-from' food, says this same thing every year, but maybe food labeling initiatives fail because they don't go far enough and their time is finally arriving. Absent a competitive advantage granted by government fiat, GMO-free labeling has been a big failure for companies promoting their goods that way because no one without a biology lab can tell you the difference between genetically modified and organic food.

Science 2.0 contributor Kevin Folta has a challenge for the most discerning of palates and those claiming to be allergic to GMOs - identify which type of food process created the sugar in the graphic below: 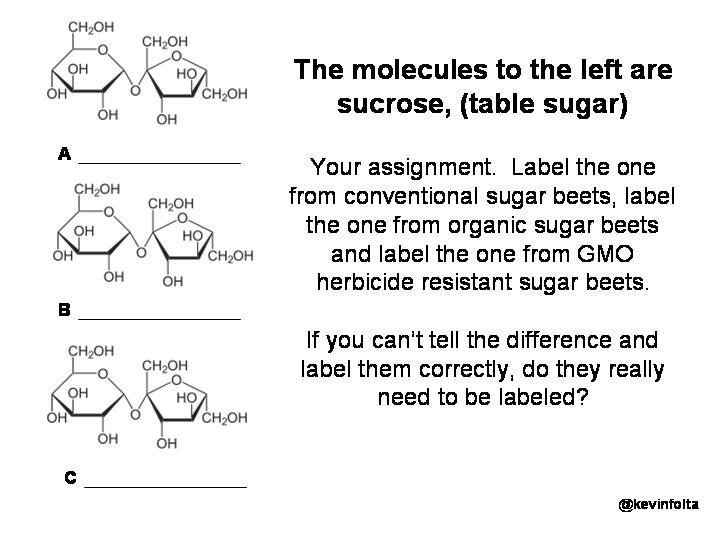 And while gluten-free has ballooned into a $5 billion profit center - companies charge 242% more for things like ice cream with a special label - that is never going to last. People instead want something they can really recognize as being different. Non-GMO rock just salt isn't enough in 2014.

Low-fat labeling is practically dead on arrival, and 'organic' looks quaintly 20th century to Millenials. Lactose-free - that was a thing? No additives, no preservatives - a niche.

But what about a label that has all of those, plus hormone-free, antibiotic-free and no BPA?

How much more would that sell?

Not much more, I think. Just like GMO-free food just cannibalizes organic food revenue, there is really only one label that matters most:

To all but the elite 1% and their willing dupes, this is the label that matter. Credit and link: Capital Press

Agonizing over 'what my food does not contain' remains very much a first world problem. Wealthy elites can adopt a "let them eat kale" mentality toward poor people but the public just wants the best food at the best price - and that remains the food grown on the majority of conventional American farms.
Science 2.0
More Articles All Articles
About