Charles Darwin And A Koch Brother Everyone In Science Academia Can Like
By Hank Campbell | February 12th 2015 06:00 AM | Print | E-mail 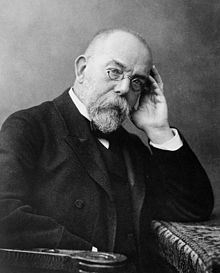 Everyone has heard of Louis Pasteur - most people know that pasteurization is a process of sterilizing food to make it safer. (1) And today is Darwin Day, when Charles Darwin is fêted for his work on evolution and natural selection.

Fewer people have heard of Robert Koch, though he is responsible for keeping billions of people alive in much the same way Pasteur is.

Prior to the 1800s, religion and science had comfortably maintained their non-overlapping magisteria, just as they had long done and regardless of modern pop culture revisionism like claims that Giordano Bruno was a martyr for science or denial that Kepler was a Young Earth Creationist. Spontaneous generation, a tenet of religion, had been a long-debated hypothesis in science and interpretations of the work of Jean-Baptiste Lamarck in the early part of the century had added to that.(2). Félix-Archimède Pouchet seemed to settle the matter in 1859 when he showed that life could be created from inorganic materials (3). His book was called Hétérogénie ou Traité de la generation spontanée. That same year, Darwin published his seminal work, On The Origin of Species by Means of Natural Selection, or the Preservation of Favoured Races in the Struggle for Life, and its premise was that if spontaneous generation had occurred, it was too far back in time to know. Modern life was the product of common descent, with modification.

The theoretical end of spontaneous generation. The empirical end was about to arrive. Link

Scientists were intrigued by the possibilities because this was the post-Frankenstein era and biology was the final frontier. In the burgeoning atheist movement, spontaneous generation, life from un-life, was equally prized for a different reason. If natural science could spontaneously generate man, there was no need for God.

Pasteur was both a scientist and religious, and he was a fervent opponent of spontaneous generation which, thanks to Darwin and Pouchet and others was once again a hot topic. In 1859, he was in his late 30s, and he believed that people arguing for "heterogenesis" knew just enough science to be wrong. So he set out to tear it all apart by showing that Pouchet's spontaneous generation was just microbial contamination of experiments(4). In 1864, when Pasteur finally did all that with absolute rigor, 20 year old Robert Koch, one of 13 siblings in his family, was studying medicine at Gottingen University. He became inspired by Pasteur's methods and spontaneous generation and also wondered about man's relation to nature. He would become one of Pasteur's greatest rivals in the race to solve the mysteries of disease.(5)

Like a great many breakthroughs, it was ironically war that gave him the chance to really learn about science. The Franco-Prussian War broke out in 1870 and Koch got to do more than simply treat soldiers and civilians as a physician - he finally got to see a whole variety of diseases under a microscope. Due to him, the field was about to go from observational and theoretical to deductive. Using his microscope, he first proved the existing hypothesis that anthrax was caused by bacilli and then took it a step further - he set out to grow it for controlled study. By 1880, he has become famous for his research and was tasked with formalizing methods of isolating and cultivating bacteria in order to create a road map for preventing their spread.

The four criteria he created, now called Koch's postulates, remain a cornerstone of immunology today: An organism must be found in only the tissues of diseased animals; the organism must then be isolated and grown outside the body; the cultured organism must be transferable to a healthy animal and the animal must show signs of infection, after which it can be; isolated from this newly infected animal.

By 1882, he was convinced that tuberculosis - consumption, a life-threatening lung disease - was a bacterium, rather than being inherited or spontaneously generated, like most believed.  He was able to prove it using his newly stated criteria and on March 24th, he discussed his work at the Physiological Society meeting in Berlin.

The researchers in attendance were dazzled. Modern bacteriology was born.

Meanwhile, Pasteur had hypothesized that cholera was caused by a microorganism and so Koch set off to study an outbreak of it in Egypt. He did discover an organism in the intestines of people who had died of cholera but it defied his own postulates - it did not spread when injected into other animals.  So he set off for India and another epidemic - it is true confidence in your science to go toward a cholera outbreak - and he still couldn't get it to spread to animals by injection, but he did discover it in water. He realized that sanitation and hygiene was the key to preventing it. (6) (7)

Koch is a towering figure in the field bacteriology but his work was not just academic. He also became the father of public health activism, advocating legislation to promote hygiene and prevent the spread of various infectious diseases, leveraging insights he derived from his basic research. For his work on tuberculosis, he was awarded the Nobel Prize in 1905. Pasteur had already died by the time the award was created but he nonetheless has the last word - his is the first name in preventing foodborne diseases worldwide.

On Darwin Day, it's easy to just think about natural selection - but it's also good to recall the intellectual fervor Darwin's work launched all across biology. We can thank the conflict between evolution and spontaneous generation and the rivalry between Pasteur and Koch for a lot of positive things we have now.

(1) Anti-science activists promoting raw milk and bean sprouts complain about it, but it has saved uncountable millions of lives.

(2) Spontaneous generation and Lamarckian evolution have made a roaring comeback - it is called epigenetics now.

(3) 'It was in a journal' thinking of its day, much like toxicology papers which show no data and are not reproducible are prized by environmentalists. And let's not even get started on what modern epidemiology is doing to itself.

(4) He also accomplished something else that would not take off technologically until the next century but that would make him a household name long after his death - he discovered that heat could kill foodborne pathogens.

(5) It was not all balloons and ponies between them. They were both patriots and France and Germany had been in a constant state of war or near war for the entire century. That rivalry boiled over into science as well. In 1882, an error in translation would cause the Koch camp to launch a scathing attack on Pasteur's anthrax work. In modern times, they are both giants in science and though everyone knows Pasteur by name, they probably also know the name of the company based on Koch's work - Merck.

(6) His critics were unimpressed by his theorizing. Max von Pettenkofer, the most famous hygienist in Germany at the time, engaged in his own self-experimentation and got together with some friends and drank cholera water. Two developed symptoms and Pettenkofer got diarrhea but no one died so Pettenkofer insisted he was right and Koch was wrong but he later had to have felt like he dodged a scientific bullet.

(7) Pasteur had long been willing to self-experiment. For an early n=1 study on secretion of succinic acid due to high-fat diets, he ate a half pound of butter every day. After his illness due to his diet passed, he worked on animals instead and the results became his dissertation.