Hank Campbell
The U.S. Food and Drug Administration (FDA) is warning Whole Foods customers not to consume a line of organic raw almonds due to elevated levels of hydrogen cyanide (prussic acid/formonitrile - chemical formula HCN). Hydrogen cyanide is a natural toxic chemical that interferes with oxygen in our organs so it can quickly be fatal, but even in smaller exposure can be damaging to the central nervous system, the cardiovascular system and the pulmonary system.

That's why it has been synthesized for use in chemical warfare.  It isn't just in plants and organic food, it is also created by volcanoes. Strange chelation therapies contain it too, and the World Health Organisation cautions against exposure, including in soil at hazardous waste sites. Luckily they don't sell hazardous waste soil at Whole Foods stores in San Francisco. But they do sell organic 'wild' almonds, so caveat emptor the same way. 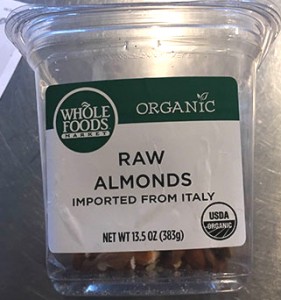 It says USDA Organic. That means it will kill you in a more ethical and nutritious way than conventional cyanide.

Marin Foods Specialties, Inc. of Byron, California has recalled its Organic Raw Almonds (bitter almonds - the "wild" form of sweet almonds) and no human illnesses have been reported.

Exposure to higher quantities of food containing prussic acid may cause other more serious health effects including convulsions, loss of consciousness, low blood pressure, lung injury, slow heart rate, and respiratory failure leading to death. Showing these signs and symptoms does not necessarily mean that a person has been exposed to cyanide.