Hank Campbell
A California Democrat believes he can curb diabetes by requiring warning labels on sodas and energy drinks.

Warning labels are not new to Californians. Ever since Proposition 65 required the ubiquitous 'may cause cancer' signage in virtually every business, lawyers and the politicians they lobby have been seeking to duplicate it for their pet causes.

Senate Majority Leader Bill Monning (D-Carmel) introduced the new warning label legislation, a rehash of last year's failed effort, saying,  “Given the rock solid scientific evidence showing the dangers of sugary beverages, the state of California has a responsibility to inform consumers about products proven to be harmful to the public’s health. This bill will give Californians the at-a-glance information they need to make more healthful choices every day.”

Perhaps, but people already know what they are buying. And when did a high-calorie fruit juice become "healthful"? Senator Monning is a politician with a law degree so he can say "rock solid scientific evidence" with a straight face, the same way a lawyer for Exxon can say it about fossil fuels, but it just means he believes the evidence that a lobbyist gave him. 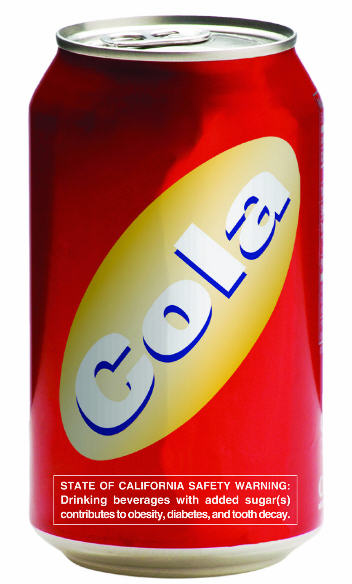 What is a concern to impartial researchers is that this bill is implying diabetes is caused by one type of sugar and not another. SB 203 would only require a warning label on sodas, sweet teas, sports drinks and energy drinks that have 75 or more calories per 12 ounces, because they claim that two sodas or energy drinks per day causes a 26 percent higher risk of diabetes. 12 ounces of orange juice is 160 calories and is 14 percent of the total sugar daily recommended for an entire day. How will drinking "two or more" of those every day not cause diabetes?

So they are picking and choosing 'health' drink winners in the marketplace, which is bad enough, but that they think they can stop diabetes with a warning label that readsw "STATE OF CALIFORNIA SAFETY WARNING: Drinking beverages with added sugar(s) contributes to obesity, diabetes, and tooth decay" is even worse. The verbiage was partially written for Monning by ChangeLab Solutions, which is funded by the Robert Wood Johnson Foundation, famous for writing First Lady Michelle Obama's new lunch program standards, and other lobbying groups.

SB 203 is the successor to last year's SB 1000, which failed in committee. The California Center for Public Health Advocacy lobbying organization that co-sponsored this year's effort believes they would have succeeded last year if industry lobbyists had not undermined what was called epidemiologically fuzzy data by outside experts. The lobbyists say the public is on their side, citing their own internal polling which found that 74 percent of people wanted warning labels.

If it gets out of committee this time, and then survives the inevitable court challenge because the evidence is not as "rock solid" as Monning believes, they will have succeeded where New York City failed. Efforts to "ban Big Gulps", meaning drinks over a certain size, were dismissed as arbitrary and capricious in a New York court because the size distinction had no scientific validity. This new effort may be just as capricious because it does not apply to all drinks and also picks an arbitrary size. By specifically exempting fruit juice, vegetable juice and milk, they implicitly claim they have scientific proof that  those calories will not lead to obesity or diabetes. Nutritionists know that calories are calories and sugar is sugar. Drink two glasses of fruit juice per day and you are much more likely to get diabetes than people who don't. Go on a reduced calorie diet of nothing but McDonald's food and you are still going to lose weight.

The scientific rationale does not improve from there. The supporting documentation invokes "pre-diabetes" rates, for example, an arbitrarily-defined term which every non-agenda-driven person wishes activists would stop using. Like being "pre-pregnant", it has no scientific legitimacy.  They also cite even fuzzier economics claims - $52 billion a year in things like 'lost productivity', whatever that is.

Nonetheless, the Democrats behind this claim the science is on their side, just like they do with anti-vaccine and anti-GMO beliefs and the fuzzy epidemiological curve-matching there. "The nation’s leading nutrition and public health experts agree that the proposed label is strongly supported by scientific evidence.(27)", they write. That evidence is in citation 27, which reads "See Press Kit: Scientific Panel" which is just a list of names of the people on the panel. That's not evidence, it is a logical fallacy, an appeal to authority. There are respected scientists on the list, Michael Goran writes here, but he would ban high-fructose corn syrup outright if it were possible, so he is not exactly impartial. The panel members were all chosen because the sponsors knew what they would say in advance. That is not legitimate. When Exxon has fact-finding panels on CO2 emissions, they always include at least one global warming believer. If a nutrition panel has less balance than Exxon, the public should be skeptical.

The question will be, do Democrats in the legislature believe that drinking 100 calories of fruit juice, vegetable juice and milk is not going to cause diabetes but 100 calories of soda will? Last time this bill came up a bunch of Democrats on the Health Committee abstained so it would die. It's hard to know what Californians actually believe, agenda-driven field polls aside. Californians voted down GMO warning labels and also gay marriage. An alarming number of Californians believe longer breast feeding and organic food prevents measles better than vaccines do. It's a toss-up how people will vote and that is why the activists are not trying for an Initiative, like with cancer and GMO warning labels, and got the Senate Majority Leader to sponsor it. As you might expect, the California state legislature is top-heavy in Democrats so if it gets to a full vote, it is guaranteed to pass.

Critics can try to focus on the onerous cost of enforcement, since the science may not resonate with the public. Proposition 65 made the attorney who wrote it, James Wheaton, wealthy, because it provided for lawsuit judgments even when there was no harm, but this would be enforced by the government. That means a state government with $500 billion in unfunded government union liabilities will have to add even more government union employees - going around to every store in California with a cooler or a drink fountain and making sure that some high-calorie drinks have warning labels is an expensive proposition.

The bill contains the solution - it creates the Sugar-Sweetened Beverages Safety Warning Fund, which would consist of money collected in fines from business that don't have the warning label in just the right spot, or the right size, or no corner curled up, or any of the ways Prop 65 penalties were granted.

Given that funding structure, if government employees want to keep their jobs, they have to hope businesses violate the new law.
Science 2.0
More Articles All Articles
About