1. In an overhyped analysis certain to make biologists want to reach for their pistols, it has been declared that women are evolving to be more beautiful:

"Evolution has led to women, but not men, getting progressively beautiful, according to scientists" it reads.

That's right, evolution doesn't take any time at all; in a generation or two, it can make women even more superior than they already are.   Somewhere in Heaven, Lamarck is giggling and Darwin is wondering why biologists haven't caned Markus Jokela, a researcher at the University of Helsinki, who made the ridiculous claim.    Why?  Because he's a psychologist and what he actually knows about evolution I can fit in my sock.  (P.S.  Hey 'New Atheists', if you want to contribute something of value that doesn't involve cloying sanctimony, come up with a phrase we can use besides 'somewhere in Heaven' - thank you).


If scientists think it was hard to get a date with Sloan-Kettering evolutionary biologist Franziska Michor before, wait until she evolves even more.

We don't want newspaper science articles to be burdened by facts so if attractive women have more children than ugly women and attractive couples have more daughters than sons, it must be a new pillar of biology that women are evolving to be more attractive than men.

2. Democrats better hope retarded people don't vote.  We're all a little hypersensitive about language and intent, as Harvard bigot-in-residence Henry Louis Gates Jr. probably thinks the Cambridge police are, simply because he labeled police objections to jokes about their mothers as racism only to later wish it would all go away when the facts came in that the 911 caller didn't mention his race and the police simply objected to being screamed at on the lawn by an academic with an oversized sense of entitlement.

Who knew that Democrats would have to spend 2009 telling everyone to lighten up about language?

A House of Representatives bill discusses "a hospital or a nursing facility or intermediate-care facility for the mentally retarded" which doesn't seem too politically correct.   Obama, after wading into the Gates debacles by siding with a black friend over white police officers despite their being correct chose not to get involved, since he used up all his good "like the Special Olympics" jokes when he discussed his bowling on "The Tonight Show."

Geologist Ian Plimer says global warming is a money grab perpetuated by big business environmental groups like Club Sierra ... errr, I mean Sierra Club (if you've been to their offices you know why it's easy to make that mistake) to gain donations.  No different than a church.

He has some reasonable points though one thing is certain; more pollution is not our friend.   I have long been critical of the focus on CO2 (1992, if you are counting) and it's no secret that the late 90's Kyoto targets had dates a little too convenient for two big countries in Europe while declaring that emissions from China, India and Mexico didn't matter, leaving only the US to be economically impacted by mitigation.

When you're a country in Europe if you can't catch up to the US economically, the second best thing to do is cripple your largest competitor.   They needn't have bothered.   8 years of George Bush followed by the multi-trillion dollar fiasco about to be perpetuated by Obama have managed to kill our economy just fine.   It will still be funny to see Al Gore dressed up in one of those Pontiff hats.

4.  "Mad Men" is set to return for season 3 to AMC Aug. 16 at 10 p.m.    I was at a panel on 'Making The Web Work For Science' (more on that soon) with PLoS founder and drosophila fan Mike Eisen last night and I bought him a beverage - but he did not order a martini, which the James Bond crowd prefer, rather he ordered the more exotic alternative gimlet so I asked him if he was a "Mad Men" fan and he said indeed he was.

Combine in a shaker with ice, shake vigorously, strain into a chilled cocktail glass.   Serve with a slice of lime.

"Mad Men" is the perfect series if you are man and dream of a pretend world in the 1960s when you could smack your secretary on the butt and she would laugh - or if you're a girl who thinks men in the 1960s looked like Jon Hamm.

AMC is trying to go viral with fans so they have created a make your own Mad Men avatar site.  Here's mine: 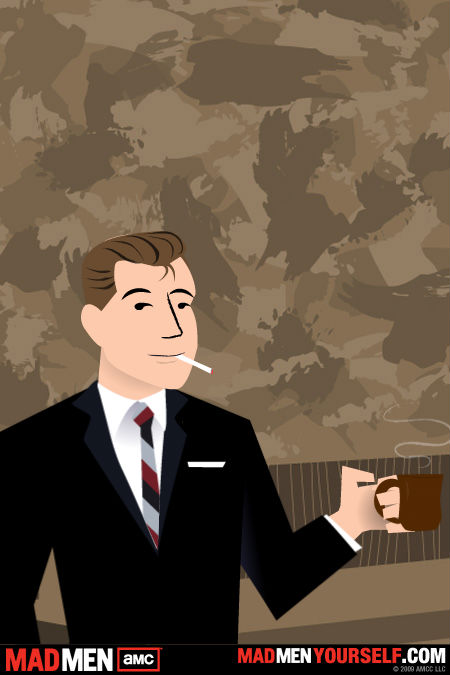 Yeah, that looks a lot like me anyway.   Except I have a cigar instead of a cigarette.    Someone get me a secretary!
Science 2.0
More Articles All Articles
About