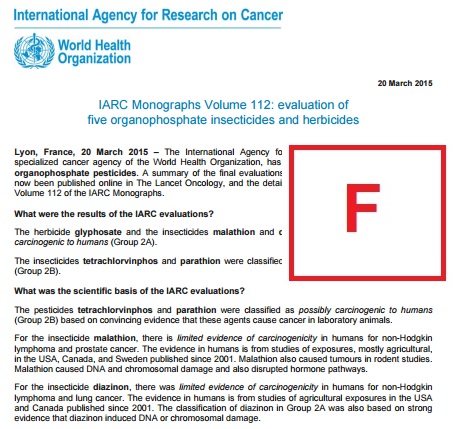 In politics, all parties have their own 'fact-checking' and supposedly non-partisan organizations debunking each other, so they can't really be trusted. But in science true neutral fact-checking is actually possible.

So why would any real group ignore science and instead place weight on weak and discredited studies like those of Gilles-Eric Séralini? It remains a mystery and yet the International Agency for Research on Cancer (IARC) did just that with its paper on organophosphate insecticides and pesticides in Lancet Oncology.

It didn't take long for Academics Review, a group of experts from around the world who separate falsehoods, half-baked assertions and hyperbole from what the peer-reviewed science says, to give the new report the worst possible grade - an "F".

In 10,000 Shots Of Scotch And Why I Don't Fear Pesticides I wrote about various efforts to try and show pesticides can cause harm and to give them a real-world parallel: I can't drink 10,000 shots of scotch all at once and neither can you, so you are probably not too concerned if those are the orders of magnitude it takes to get an effect. But environmentalists are not in the science business, they are in the fundraising business, so a study like Séralini's, which was intentionally manufactured to look like Monsanto's product caused cancer, had no real-world parallel but still gets lots of press from anti-science activists. In actuality, that strain of rats was almost certain to get cancer for as long as he (unethically) kept them alive.

In the new paper, the IARC included studies that could only find effects far beyond the well-noted no-effect levels (NOELs) - hundreds or thousands of times real-world levels. Unethical researchers who are on an ideological bender do that, I detailed it about neonicotinoids in When It Comes To Neonics, Activists Understand PR Better Than Chemical Companies Do, where a group of conspirators in environmentalism invoked Haber's Rule to try and show harm, even though scientists know it can't be used systematically for risk assessment in public health decision-making.

Why this was in Lancet Oncology could be for the same reasons. About neonics, the conspirators intended to recruit authors experienced in getting into high-impact journals and when that failed they went down the credibility food chain. Journals are in business like anyone else and now they are competing against 35,000 open access outlets so if a paper looks like it isn't made up and checks off a few boxes in the minds of an editor and will get a lot of attention (in the case of the neonics conspiracy they prepared supporting papers to push up the citations of the big one) then it is likely to get a green light from someone.

None of that may be the case here, it could just be a poorly-done paper by people who had a conclusion and found studies to match it and got a sympathetic peer reviewer to agree. Despite there being weak evidence, they list glyphosate, malathion and diazinon as "probably" carcinogenic, based on papers like Seralini's about rats and spotty epidemiological claims. I had believed only other French people could find something good to say about a French author who did a study that would have landed him in jail for animal cruelty violations in other developed nations but Kate Guyton spent some time at the EPA - for that reason I am shocked she let it be included in any serious report.

The work is a little bizarre in other ways. Parathion and Tetrachlorvinphos are actually banned in the US and the EU but are only 'possible' carcinogens in this paper while glyphosate, arguably one of the most thoroughly tested products in the world, is 'probable' despite the EPA not finding any reasons to restrict it.

There must be more to this story but the authors are all lesser known so someone more in tune with the political undercurrents may have more to say on that aspect in the near future.