Hank Campbell
Having once lived in the Pittsburgh metropolitan area, on occasion I would drive to those old gigantic relics of steel mills.

They were behemoths and so were the buildings that housed them. They looked like they could block out the sun. In John Ford's "The Quiet Man", a native of Ireland asked John Wayne's character what they feed men in Pittsburgh that makes them so big and Wayne replied, "Steel, and pig-iron furnaces so hot a man forgets his fear of hell". In the early 1950s it was a job for hard men.

In America, I used to say, "You won't be somebody unless you manufacture something" and since I was always at a software company, that sentiment was anathema to the people around me. White-collar jobs were the way to go. And looking out of our office window in Station Square at the high-tech conversion of Pittsburgh from a hazy steel town to a high-tech economy, I agreed they had a point.

Like high technology, science is clean, it is high-paying and it is multi-cultural. That's good on many levels. Why would anyone protest that?

Well, they do. Arizona was a good place to do astronomy because 120 evenings each year have no clouds while another 120 have only a few. Arizona has high mountains and natural transparency due to a dry climate. From the 1950s on, astronomy boomed, and that meant an influx of educated, wealthy people from across the world without factories or belching smokestacks. That is a good thing.

But environmentalists claimed Mt. Graham observatory and the Large Binocular Telescope in Arizona was going to kill off the Mount Graham red squirrel. Ignored was the fact that there were already houses and man-made lakes there and squirrels did not die, or that it was two miles up and no squirrels were living there. They lamented the unique 'sky island' ecology - as if professional environmentalists from out of state care more about the 'ecology of the sky' than astronomers, who have to have restrictions on light pollution.

Result: Governments started building telescopes any place without environmentalists, places that wanted an influx of money and educated scientists and engineers. Hawaii once jumped at the chance to steal high-paying zero emission science jobs from the mainland, but since 2008 there has been an influx of what Hawaiians call "unaffiliated haole activists" who made their way "into the Democratic Party organization and lower-level elected offices" and they are not thinking about Hawaii, they are thinking about raising money.

The University of Hawaii, which governs the Mauna Kea telescope project, is allowing addition of another building to do low-emission, white-collar science work. The best part: China and Japan and India and Canada are footing the bill to boost the local economy, not Hawaiians. 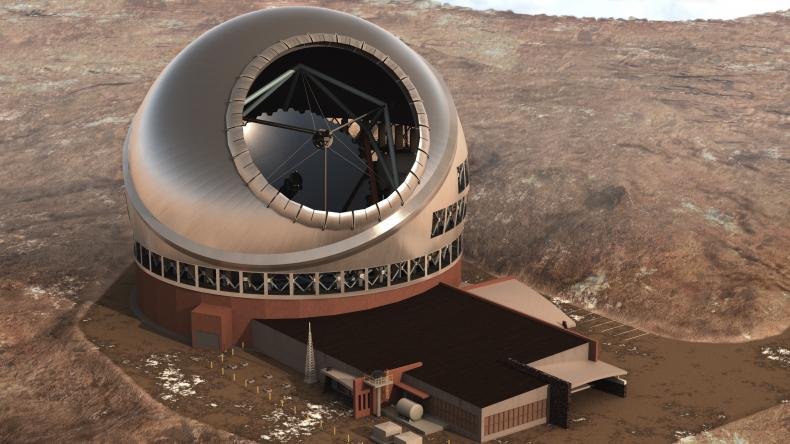 But since it was approved, protesters determined this was "sacred land" and they even got Aquaman to agree. It's 13,000 feet in the air, above 40 percent of Earth's atmosphere, and the Thirty Meter Telescope is taking its place among 13 other observatories already there, in the Mauna Kea Science Reserve allocated above 11,000 feet in the 1960s. I supposed it could be sacred, in the sense that only religious elites were allowed to visit above the tree line on penalty of death, but the new construction impacts none of that.  If protests over one more building when there are already many there sounds like protests over adding 400 miles of pipeline to 20,000 already there in the Keystone XL debacle, it's because they share a lot in common, including a celebrity endorsement, albeit a minor one - Jason Momoa, who played child rapist Khal Drogo in the "Game Of Thrones" television show and then flopped in a Conan The Barbarian reboot. Jason Momoa. Does he hate science or local Hawaiians? Either way, he is helping to drive high-paying, white-collar jobs out of Hawaii. Pinterest

Nonetheless, once an actor supported it, University of Hawaii faculty and students began organizing a walkout. Well. sort of a walkout. It was organized by University of Hawaii professor of Hawaiian Studies Jon Osorio, who was probably just happy his life's work can get him in the news, and the students were in his Hawaiian Studies class. They all repeated this 'sacred land' argument, despite the fact that Hilo is the poorest town in Hawaii and is about to get a $1.4 billion influx.

There is nothing sacred about poverty and none of the "haole activists" and wealthy University of Hawaii people promoting protests care about those actually living there. Protests have sprung up in other places in the state also, and most of them had never heard of Hilo or could find Mauna Kea on a map before they read about this in the newspaper.

Construction won't stop, environmentalists don't have the sway they used to have, but it is not worth the hassle. The University of Hawaii has already announced the Thirty Meter Telescope is the end of the road for astronomy there.

So it goes. If they don't like clean science jobs, they can always stay dependent on tourism.
Science 2.0
More Articles All Articles
About