Hank Campbell
Some stereotypes are self-reinforcing.   If someone tells you over and over that you are oppressed, if you hit an obstacle and fail, like all of us do at some point in our lives, a convenient excuse is that you are discriminated against.(1)

There is zero data showing women are discriminated against in science, math or engineering - none.   But because there used to be far more men and those men were not lined up against the wall and shot to make room for women in faculty, the claim is that science academia is still prejudiced against women.

For caring about science, some people sure engage in pseudoscience if junk data matches the cultural topology they want it to match, so that should help put into perspective why people without Ph.D.'s don't understand that vaccines don't cause autism, if we are ridiculing progressives, or that climate change happens, if we are ridiculing conservatives.  I mean, we can't even get really smart people to take an unbiased look at hiring data.

The unbiased look at the data shows that females do as well as males in math for the first time in history, a terrific achievement.   Women get more Ph.D.'s than men and not only are women hired for faculty positions as often as male counterparts, they are hired more.

Yet because the gross numbers are still less, it must still be a problem and the BBC once again spares no effort in being cultural busybodies and try to make the case with no real data at all. Hannah Richardson, BBC News education reporter, even invokes a James Bond movie with a female scientist in it from  1979 so you get the message properly framed for you: 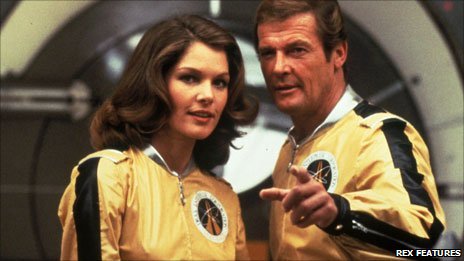 James Bond movie as supporting data.  If you want to believe it, you can't work at NASA unless you are attractive.

Some of the rationale Richardson uses?   Kids in 2006 asked to draw a picture of a scientist drew men more often than women.  Really, that's it.   Are there no women police either?  Because kids who draw a picture of a cop draw men more often than women.    For that matter, when they draw robbers they are more men too.  Maybe we need cultural outreach so women get equal representation as criminals.

The problem with activism replacing data is that it's culture and politics more than science - so some people who read this will ignore the data and say my article is invalidated because I am a man.    Using that same logic,  I can claim that advertisers are biased against independent science media like Science 2.0.   If we get less money, and we do, it must be discrimination and not the fact that big media companies like the BBC have salespeople who go out and aggressively get expensive advertising.

More anecdotes as data: Rachel Tibbell, development consultant at the UK Resource Centre for women in science, engineering and technology (UKRC), says she has twins, a boy and a girl, and some people buy the boy a car and the girl a doll.    Really, isn't she lucky people buy her kids anything at all, knowing their gift choice will then be fodder in her culture war?

And then even more anecdotal evidence - Professor Charlotte Watts, a mathematics professor, says one time someone joked to her that 'I didn't know girls could do maths'.

So how did she get to be a math professor if the culture is so biased?  Well, that is the great thing about claims of discrimination - not only do you get to criticize everyone else, you get to imply you are so much more awesome than everyone else because you made it despite discrimination.   You can't lose but if you don't win, and even if the data shows no bias, social scientists have invented gender fatigue and stereotype threat to rationalize it for you.(2)

It's a cultural advocacy issue, so junk math is allowed.  They cite Sean McWhinnie, independent research consultant with Oxford Research and Policy, who laments that men and women will only reach 'parity' in 2021 for biosciences, in 2042 for chemistry, in 2060 for physics and in 2109 for civil engineering.   How did he arrive at such a ridiculous number?   He ignored actual current hiring statistics and simply made a linear curve of recent gender changes and predicted when those would break even if the rate stays the same.   In other words, every man who retires or dies will still primarily be replaced by men even though hiring statistics show that is not what is happening at all.

What would he have us do, engage in both gender and age discrimination and fire men who have done nothing wrong?    Science is about excellence, not forced equality, especially if there is no systemic bias holding people back, and older researchers continue to do excellent work so they shouldn't be put out to pasture to impose gender equality.

Yet if implied bias is not enough to convince women they are oppressed, the tired 'women have babies' argument is invoked once again.

Way down at the bottom of the article, Richardson - in the interests of 'balance', we must assume - does note one woman who had no issue even 20 years ago.   Professor Ottoline Leyser, author of 'Mothers in Science: 64 Ways to Have it All', says not only is there no reason for women scientists to choose between their career and a family, it is actually much easier in academia.

Finally, someone has defended uber-progressive academics against insinuation they are bigots despite evidence to the contrary.   We know doctors have babies and seem to have no issue in their careers so how academia can be regarded as sexist is a mystery.

Science academia is terrific for men and women because excellence matters most - not race and not gender and, despite my example above to show how ridiculous those claims are, not political affiliation.  It's time more people started applauding the excellent culture in science instead of insisting that isolated examples of inequality, real or perceived, mean the system itself is flawed.

(2) For being 70% women, the social sciences are incredibly patronizing toward women.  The notion that intelligent women are so emotionally fragile they will be unable to perform unless a classroom has 50% women has to be a little maddening to women in actual science.
Science 2.0
More Articles All Articles
About