Danna Staaf
Southern dumpling squid are tuckered out by sex. So say Australian researchers Franklin et al. in the journal Biology Letters. Sure, it's salacious science, but so what? 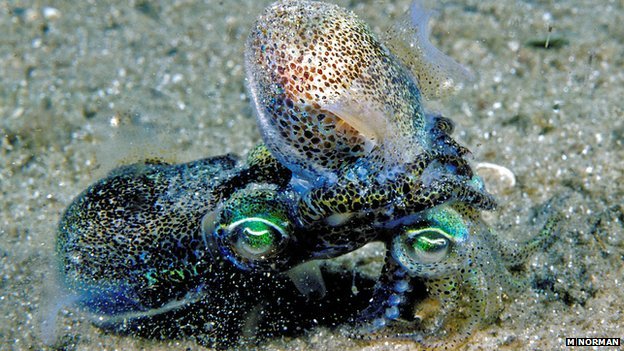 Dumpling squid: they are frisky. Photo by Mark Norman, published in Biology Letters.

Here's the thing. Sex is a costly proposition (see what I did there?). It takes time, energy, and resources, and sometimes, if you're the unfortunate victim of sexual cannibalism, it can even take your life. The evolution of sexual strategies is a constant balancing of costs and benefits (the primary benefit, of course, being to mix up your genes with someone else's and pass them on to the next generation).

In order for evolutionary biologists to understand nature's plethora of sexual strategies and mating systems, they need a realistic understanding of the costs of sex. And although some kinds of costs (everyone is fascinated by cannibals, right?) have been very well documented, others remain mysterious.

As obvious as it seems to suggest that mating requires energy, Franklin's study is only the second ever to illuminate these energetic costs. The first study looked at millipedes and found that "oxygen consumption during copulation was elevated relative to resting levels." I used to keep pet millipedes (They eat your old lettuce! They are gentle and quiet and sweet!) so I find the concept of heavily breathing millipedes adorable. Giant millipedes: they are cute. Photo by Mouser Nerdbot.

But on the cuteness scale it is hard to beat dumpling squid*, so let's get back to our darling Euprymna tasmanica. They can mate for up to three hours--which is an especially long time when you consider that they live less than a year. A single copulatory act could constitute 0.03% of their life. The human equivalent would be a full week. No wonder Franklin et al. found that the tired little dumplings have a tough time with post-coital swimming!

One has to wonder, why take so long? Plenty of other cephalopods have fleeting encounters that are just as effective for gene transfer, and presumably three-second sex is less exhausting than three-hour sex.

Lingering has its advantages, though. Part of what makes dumpling squid sex so athletic (as well as lengthy) is that the male squid pumps water into the female's mantle. Nothing more is said of the activity in the Franklin paper, but it immediately set off my "sperm competition" alarm bells.

In promiscuous species like cephalopods, it's not enough for a male to simply hand over his own sperm--he has to make sure that it beats out all the other males' sperm. And one way to do that is simple mechanics: washing, scraping, or scrubbing.

A female dumpling squid stores sperm in a "bursa copulatrix" on the lining of her mantle cavity, just in front of the oviduct where she'll release her eggs. Flushing water into her mantle could have a good chance of cleaning competitors' sperm out of the bursa before a male deposits his own packages. Of course, I'm speaking hypothetically, based on general knowledge of reproductive strategies--but it looks like there may be a PhD student working on exactly this topic! It'll be neat to see what comes out of this field in the next few years.


* Even though they aren't true squid. Southern Dumpling Squid should be on the list of animals with misleading names: "Not a squid. Actually prefers biscuits."