Doug Sweetser
[Clarification: I tweaked the title because the focus of this blog was intended to be quite small.  While scalars and vectors are used in a dizzying array of areas in many dimensions, quaternions are constrained to work in one plus three dimensions.  One could say one plus three equals four, which is true, but I say one plus three because with quaternions, the one has different math properties from the three.  What happened in the comments was the first two folks admitted they were looking for a blog with a different subject, one that might have me linking quaternions to objects that transform like 4-vectors.  That really is beyond the scope of this blog which doesn't confront how anything transforms.  I will edit this blog and my comments to clarify when I mean quaternion scalar and quaternion vector because any and all quaternions are the combination of a quaternion scalar with a quaternion vector.  Those words have no implications for how a quaternion transforms.]


Scalars and vectors, dot and cross products, div, grad, curl and all that are old friends, defined in the first steps to more than one spatial dimension.  In this blog, those definitions will be reviewed.  The familiar will be compared to quaternion products where all of these structures were first seen.  Yet the constraint that quaternion products remain quaternions puts an odd slant on our familiar friends.

Scalars are the numbers we first learn about.  The numbers of blocks is a scalar, as is one's weight on a scale.  A scalar is how big something is.  Physicists generalize the idea by using either a real or a complex number.  Which one gets used depends on the situation.
[clarification: one can get a bit fancier and define a basis vector for a scalar, call it e0. It is only in physics graduate school that one entertains values of e0 other than one.  This basis vector only has dimension, but does not have direction.  By that I mean nothing happens to its value in a mirror.]
A vector has both a magnitude and a direction.  Vectors are pointy.  Here one first learns how nuanced definitions can be in mathematics.  There is no one right way to point.  Instead one provides a basis vector to do the work of pointing.  A vector in n dimensions can be defined like so:

Take a scalar, big or small, real or complex, and multiply it with the vector to make a new vector, resized. [note: added e0's]

The dot product takes two vectors with the same basis vectors and returns a scalar.  Technical jargon can be confusing at this point since physicists often speak of scalars as numbers that don't change under a transformation.  Instead, I will consistently use the earlier definition: one number with no pointiness.

There was no need to write down e12 since that evaluates to unity.  There is a simple interpretation of the dot product: it represents the cosine of the angle between the two vectors.

In higher dimensions, the magnitude of the cross product is known from the sine calculation.  One set of values for the cross product cannot be pinpointed, so the meaning is more difficult to track down.  That subject is beyond the scope of this blog.]

This is Lagrange's identity.

Wikipedia appears to give credit for the jargon of vector analysis to Prof. Gibbs of Yale and thermodynamics fame.  I recall reading that it was Hamilton who coined the jargon as he dissected quaternion products.  Certainly one person came up with the word dot product and the corresponding divergence, as well as the cross product and its calculus clone the curl.  I don't spelunk into math history and thus don't have access to primary source documents.

Hamilton had searched in vain for a way to multiply and divide triples of numbers for a decade.  The day after his discovery of quaternions, he defined "pure quaternions," those whose first term is zero so that the result is a triple.  He abandon the inherent scalar + 3-vector nature of quaternions since it did not fit his expectation.  This is a common error, one I am guilty of too.

I could count them: 1, 2, 3, 4.  [Note: these are the blocks of a real three year old and the block for the number four is misplaced.]  The next step was to group them and multiply.

This is the cliché of multiplication: 2x2=4.

There is a different way to line up the boxes so now they make up an area. 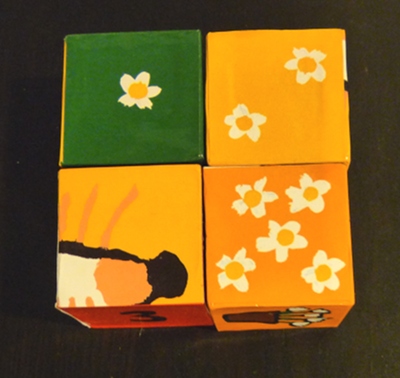 Go up one more dimension to describe a volume: 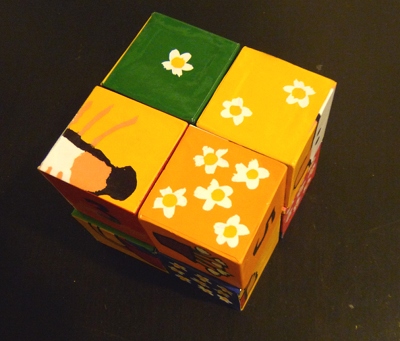 I could count all eight, or form three groups of two and form the product: 2x2x2=8.

This is trivial for readers here at Science 2.0.  It is the next step that gets fun.  How do you go up one more dimension?  I cannot do it with blocks...or maybe I can so long as I view the blocks as moving through time as well as space.  Repetitive addition in spacetime leads to an object moving at a constant velocity.

One can pluck out each of these.  This is what I expected to see based on my training in vector algebra.

One could complain about the complexity of this quaternion expression.  Yet it is a result of the request to look at only three of the sixteen terms of a quaternion product.  Note the zero [quaternion] vector, required so that the result has all the properties of a quaternion.

In vector algebra, there is no notion about keeping a place at the table for a [quaternion] scalar.  With quaternion automorphisms, the spot is saved automatically.

One can see the difference between vector algebra and quaternion automorphisms.  I chose two quaternion polynomials pretty much at random and formed their product.  Here were the polynomials with the parameters (a, b, c, d):

Both have a cubic term, V with x, W with y.  The W polynomial also has a squared term in x.  Here is the animation using just the parameter a:

The s-shaped curve indicates a cubic, while the parabola indicates the square.  So the yellow is the function V while the red is W.  One can now form the product of these two polynomials, color it in green:

Apparently the first term is always negative for the numbers created by this product.

Here is just the product, in isolation, with the dot product in orange and the cross product in pink.

The dot product sits at the spatial center of the animation, while the cross product blinks on the screen for one frame where t=0.

To save some of the commenters the trouble, this was a random pair of polynomials forming just as random a product.  I don't claim this maps to anything physicists study.  Hopefully some will recognize the potential power with these initial doodles.  Almost any function can be constructed out of a polynomial series, including those that are the subject of study in physics.
[To point out an example, one can study the sine function which can be written as a polynomial expression.  The sine function is relevant to the description of numerous physical systems.]

The same darn polynomials can be used with two parameters to create a world of strings.

The square and cubic aspects of the polynomials are less clear.

One can still form a product:

The green string is doing quite a bit more as can be seen when isolated:

This is vaguely bird-like.

I did spend a few hours generating the three and four parameter animations, which involve membranes and solids, but I don't think they will add to the discussion.  There are readers who are vocally against any of these animations.  Most readers probably just scratch their heads since the animations don't map to subjects studied in physics or math.  This work gives me some hope that all the way brighter folks playing with strings do not represent a complete waste of time and money.

Snarky Puzzle:  I learned if you cross product is zero, then you have nothing but dot product, and visa versa.  Is that always true?  Worry about the 2 parameter situation...

[Note: all definitions written in terms of components relied on the explicit assumption that the basis vectors were orthonormal.  All that were written with dot products and curls should remain unchanged if the basis vectors are no longer orthonormal.  The blog will make an effort to address that issue.]
The Stand-Up Physicist
More Articles All Articles
About