“But,” I say, “on a two-door car, the doors are larger and heavier. Also, if you’re in a limited space, the doors can’t open as far, and the smaller opening actually makes it harder for the people in the front seat.”

Putting the two together, I thought it would be fun[2] to turn the car-door discussion into a trig problem.

Suppose I park my car in a garage. The side of the car is some fixed distance from the garage wall, limiting the amount that the door can open. Figure 1 illustrates that: the car is parked at a distance of a from the wall (because mathematicians like to confuse things by representing everything with incomprehensible letters), the door has a length of d, and when the edge of the door hits the wall, the angle the door makes with the car is t. (Click on the figures to enlarge them.) 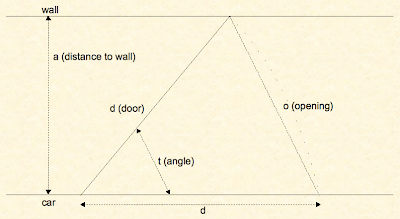 What we want to know is how big the opening (o, in figure 1) is, so we know how easy it will be for a person to get in when the door is as far open as it can be. Noting that the closed-door position, the open door, and the opening form a triangle, we bet we can sort this out with trigonometry.

The first step is to drop a line from the tip of the door to the car, perpendicular to the car. The dashed line labelled a in figure 2 forms a right triangle. 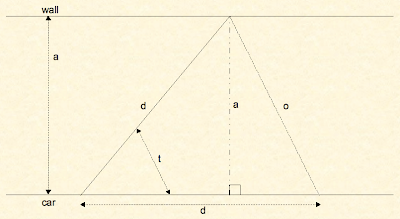 Now we’ll note that the two sides of length d form an isosceles triangle with base o. That means that if we bisect angle t we’ll get two equivalent right triangles (figure 3). 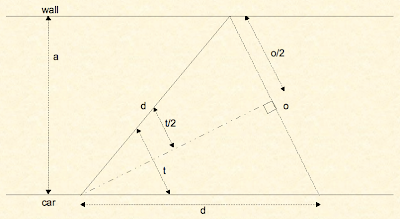 We now have an angle t/2, a hypotenuse d, and an opposite side o/2, giving us our second formula, which we can solve for o:

It’s time to plug in the numbers.

Let’s assume that a four-door car’s front door is 4 feet long, and a two-door car’s door is 6 feet long. And let’s say we park the car 3 feet from the wall. So, for a 4-door car:

So, though the door on the two-door car is longer, with the wall restricting it the door will create an opening that’s about two and a quarter inches (5.6%) smaller. That’s actually less of a difference than I’d expected. It was good to do the exercise, which showed that I was right... but not by enough to matter.

[2] Demonstrating, as it does, why we mathematicians are in such demand at parties.