It has now been confirmed officially that the Cockpit Voice Recorder (CVR) has been recovered.  It was delivered to the National Transportation Safety Committee (NTSC) in a case containing water. 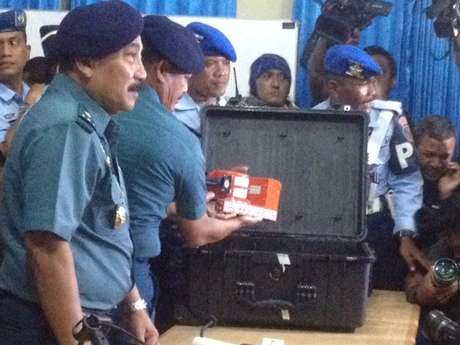 The Flight Data Recorder was delivered to the NTSC previously, also in a case containing water.  Chairman of the AirAsia QZ8501 Investigation, Marjono Siswosuwarno in the NTSC office, Gambir, Central Jakarta, explained the need to keep the recorders wet.  He said that long experience has taught investigators to avoid the drying out of the recorder which can lead to damage if water has penetrated.

"Hopefully there is no water penetration. [The CVR] will stay in the aqueous packaging to match the conditions in the sea for two weeks.  It will then be dried by a team of experts before the data is downloaded," said Marjono.

"Then data downloaded from the memory module will be transferred to the computer.  After that we can listen to the conversation in the cockpit to know what happened from preparation at Juanda Airport until the accident occurred," he added.

The CVR can record the captain's conversation with the co-pilot, either pilot with the ATC and voices of cabin crew who spoke to passengers over the loudspeaker.

Once the CVR has been downloaded to the computer Capt Ertata Lananggalih and Capt Santoso Sayogo with two or three other pilots will produce a transcript for the NTSC.

AirAsia QZ8501 No Explosion
Air Asia flight 8501 did not explode: it burst open on impact with the water.
The Chatter Box
More Articles All Articles
About