As smoking continues its inexorable southward journey toward single-digit percentages of populations being smokers, it’s common to hear people say the smokers who remain are all “hard core”, heavily dependent smokers, impervious to policies and campaigns.

The argument runs that the ripe fruit of less addicted smokers have long fallen from the tree, and that today anyone still smoking will be unresponsive to the traditional suite of policies and motivational appeals. This argument is known as the “hardening hypothesis”.

The hardening hypothesis is predictably most often used by pharmaceutical companies; those who making a living out of promoting the idea that smokers are foolish to try and quit on their own and need professional help; and most recently by promoters of electronic cigarettes who often highlight the idea of smokers who “can’t” or won’t quit but want to switch to less dangerous ways of dosing themselves with nicotine every day.

Hardening adherents argue that ex-smokers are dominated by those who were not heavily addicted and so who were better able to quit unaided and that a greater proportion of today’s smokers, said to be more addicted, cannot succeed alone and need help.

A study of smokers in 18 European nations has just been published in Preventive Medicine which provides important data of direct relevance to the hardening hypothesis.

The most recognised way of measuring the “hardness” of smoking is the Heaviness of Smoking Index (HSI). This scores smokers out of a maximum of six, comprising a score of one to three for number of cigarettes smoked each day, and one to three on the time taken to lighting up the first cigarette of the day.

The study, involving 5,136 smokers drawn from a total 18-country sample of more than 18,000 people, found that across the 18 nations, there was no statistically significant relationship between a nation’s smoking prevalence and the HSI.

Similar findings have been reported for the United States. Data on smoking in 50 US states for 2006–2007 indicate that the mean number of cigarettes smoked daily, the percentage of cigarette smokers who smoke within 30 minutes of waking, and the percentage who smoke daily are all significantly lower in US states with low smoking prevalence. This provides compelling evidence against the hardening hypothesis.

The authors found that in two of the surveys (NDSHS and NHS), while smoking fell across the population, there was no change in the proportion of smokers who smoked less than daily. While in the NSMHW survey, that proportion increased from 6.9% in 1997 to 17.4% in 2007.

The authors concluded that the evidence presented:

weak evidence that the population of Australian smokers hardened as smoking prevalence declined.

Those arguing that today’s smokers are more and more heavily addicted and unable to quit have poor evidence supporting their case. Many thousands stop and reduce their smoking every year.

We also forget what happened when the bad news on smoking first became “official” with the two historic reports of the Royal College of Physicians of London (1962) and the US Surgeon General’s first report on smoking (1964). In the decade that followed, there was nothing remotely approximating today’s suite of tobacco-control policies that have driven down smoking in countries such as Australia to only 12.8% smoking daily (see graph). 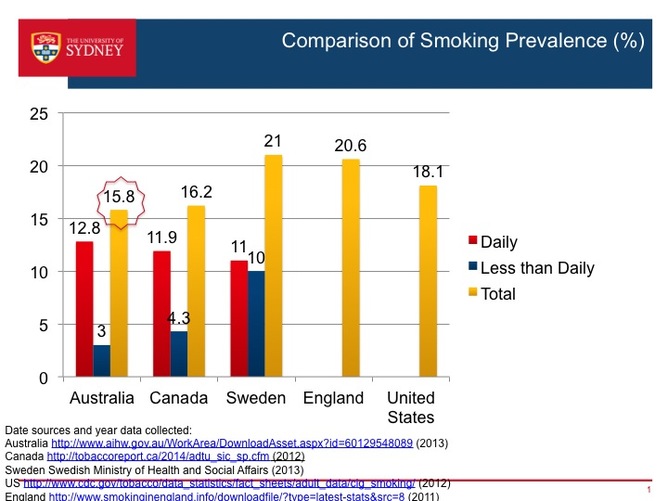 There were no tobacco advertising bans, cigarettes were dirt cheap, there were no sustained mass reach anti-smoking campaigns. Smoking was allowed everywhere and pack warnings, where they even existed, were tiny and timid.

In 1955, five years after Ernest Wynder and Evarts Graham’s historic study of smokers and lung cancer was published in JAMA, 7.7 million Americans (6.4% of the population) were former smokers.

In 1978, the then director of the US Office in Smoking and Health noted in a National Institute of Drug Abuse Monograph, “In the past 15 years, 30 million smokers have quit the habit, almost all of them on their own.” Many of these quitters had been very heavy smokers.

Quitting unaided (going cold turkey) remains the most common way that most ex-smokers have quit, despite more than 20 years of the availability and heavy promotion of nicotine-replacement therapy and other drugs. We need to be very circumspect about voices trying to downplay this major and enduring phenomenon.

Simon Chapman, Professor of Public Health, University of Sydney. This article was originally published on The Conversation. Read the original article.