Brain Injury In Sport Is An Unfolding Tragedy – We're Only Now Starting To Count The Cost
By The Conversation | September 30th 2014 01:58 PM | Print | E-mail 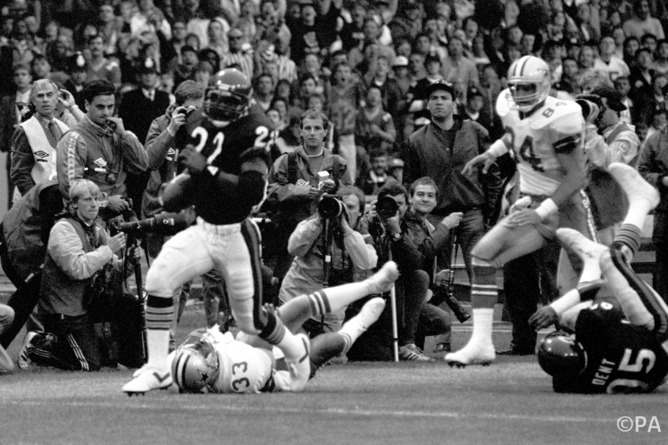 The freshly cut grass and crisply-painted yard lines. The sound of helmets clashing in an epic stack of large men vying for a single ball. Stands packed high with thousands upon thousands of crazed, prideful, body-painted fanatics. Dementia, confusion, and depression.

Wait, what? That last bit may not be present on game day, but for many football players, it’s brewing all along – with every clash, tackle, and fall.

Cases of chronic traumatic encephalopathy, or CTE, are only now beginning to unfold with post-mortem diagnoses and early symptoms of memory loss, depression, confusion, and aggression being reported by former NFL players.

With the recent cases of high schooler Morgan Manlick and Michigan quarterback Shane Morris being sent back into the game after suffering obvious concussions, fans and players alike find themselves questioning the legal, ethical, and health ramifications of football coaches' decisions.

And it’s not just in American football. In the UK, questions are now also being raised in the game of rugby after notable cases, including 14-year-old Ben Robinson who died after being allowed to return to the field while concussed.

Boxers, wrestlers, ice hockey, soccer, and rugby players tend to be more prone to head traumas than athletes of other sports. But despite athletes getting the most attention, others are also at risk; combat militants, domestic abuse victims, and even those with a history of seizures are all ticking time bombs for CTE.

Favre, though perhaps the most well-known, is not the first to “come out” with CTE symptoms.

Like a number of neuro-degenerative diseases, such as Alzheimer’s, CTE can only be conclusively ruled after examining brain tissue once someone has died. As of last December, 34 former NFLers have been diagnosed post-mortem with CTE.

“Encephalopathy” is defined as any disease of the brain. Its prefixes – “chronic” and “traumatic” – are aptly named. CTE is a result of months to years to decades of repetitive impacts on the brain and its resulting damage to axons, the portion of the neuron at which impulses are conducted to communicate with other neurons. And at a rate of nearly one concussion every two games, it’s likely that the average player will suffer several concussions during their career.

Symptoms of CTE range from changes in mood (apathy, anxiety, suicidal urges) to behaviour (aggression) to cognition (memory loss) to, in some cases, difficulty with balance and gait.

In February 2011, former Bears, Giants and Cardinals safety Dave Duerson, aged 50, sent a text message to his family requesting that his brain be used for research at Boston University School of Medicine, location of the largest CTE brain bank in the world. He promptly held a gun to his chest and shot himself dead.

Robert Stern, co-director of the research group, and his colleagues uncovered elevated levels of tau protein in Duerson’s brain, clumped especially around its deep wrinkles, called sulci. Although tau protein is critical for stability of a nutrient transport system in healthy brains, tangles of tau protein (as seen in Alzheimer’s) are thought to disrupt this system, resulting in cell death.

At least nine active or retired NFL players have killed themselves in the past four years. And the suicide of 21-year-old University of Pennsylvania football player Owen Thomas in 2010 was a startling reminder that more than just the old veterans are affected by this kind of trauma.

In the two years since it was set up in 2008, the brain bank at Boston University had possession of more than 250 current and former athletes' brains and a no-strings-attached $1m grant from the NFL. And before that there was the Brain Injury Research Institute in Pennsylvania, co-founded by forensic pathologist Bennet Omalu. Omalu was the first to characterise CTE in the brains of five former NFLers who committed suicide. He was surprised to find Alzheimer’s and dementia-like brain damage in these relatively young men.

The typical brain afflicted with CTE has reduced brain volume, particularly in the frontal and temporal lobes. This reduction is associated with enlarged ventricles or fluid-filled brain cavities.

Reduced blood flow and, eventually, shrinkage of several key brain regions, including the amygdala (emotion) and hippocampus (memory formation) likely explains the physical and personality changes associated with the disease.

A view under the microscope reveals pathologies that greatly resemble Alzheimer’s: neuron loss, neuro-fibrillary tangles formed from deposits of tau protein and the accumulation of another protein called beta-amyloid.

In rodent models, traumatic brain injury has been followed by neuro-degeneration for as long as a year after impact. The pathology, or cause, between point A (trauma) to point B (dementia) is not well-understood beyond these observations, unfortunately.

The future of football

Favre, now 44, was tackled over 525 times during his career. In an interview for TODAY, he told Matt Lauer: “In some respects I’m almost glad I don’t have a son because of the pressures he would face. I would be real leery of him playing.”

Some youth organisations have begun implementing flag football as an alternative to tackle football for kids, a critical time for developing brain. But this proposal is unlikely to catch on. Not with the obsession, reverence, and hero worship for the Great American Sport.

In July, judge Anita Brody accepted a revised settlement agreement submitted by the NFL after class action was brought by 5,000 players and their families. The original settlement offered by the NFL was rejected in January because US$675m wasn’t thought enough to cover it. Alongside this unfolding tragedy, the NFL is now beginning to face a bill that continues to grow.

Helmets can only do so much. The rules of the sport are unlikely to change. And money can’t reverse the damage and tragedy resulting from CTE. All of this begs the question: what, if anything, can the NFL do to prevent this harm in the first place?

Jordan Gaines Lewis, Neuroscience Doctoral Candidate at Penn State College of Medicine, does not work for, consult to, own shares in or receive funding from any company or organization that would benefit from this article, and has no relevant affiliations.