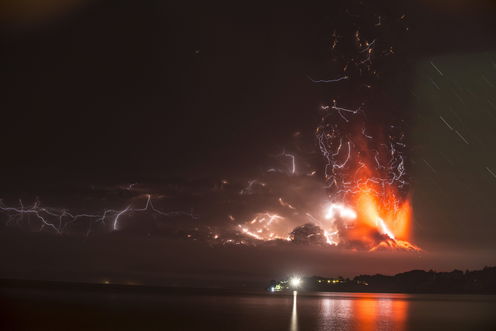 The Calbuco volcano, a 2,000 meter peak in southern Chile, sent a column of ash about 15 kilometers skywards twice on the night of April 22 and early the following morning.

As the risk of deadly flows of ash and hot air was immediate, a 20 kilometer radius evacuation zone was declared.

The event was spectacularly visible from Puerto Montt, a city of nearly 200,000 inhabitants, only 30 km away. It seems to have begun within barely five hours of warning signs being first detected by local seismometers.

There two big eruptions over seven hours caused ash to fall in the Argentinian town of San Martin de los Andes, nearly 200 km north-east of the volcano. Further eruptions are possible, although the likelihood of this decreases as time passes.

Eruptions like these are particularly significant because they have the potential to produce pyroclastic flows, which are fast-moving ground-hugging currents of ash and hot air, triggered when a rising ash column collapses. These are deadly – and the 20km radius evacuation zone wisely remains in place in case the volcano (quiet during most of April 24) wakes up again.

For example, pyroclastic flows at the Indonesian volcano Sinabung killed at least 16 people in February last year, who had strayed back inside the local evacuation zone. Less immediately deadly is the fall-out that settles from the high-altitude ash cloud that slowly disperses downwind. This is a respiratory hazard and can also kill vegetation and contaminate water supplies.

After an eruption has ceased, ash that has settled to the ground will pose a risk of volcanic mudflows (widely known by their Indonesian name “lahars”) that can choke water-courses and destroy bridges.

Video from Puerto Montt showing the 22/23 April eruption of Calbuco.

Calbuco is about 90km south of the Puyehue-Cordon Caulle volcano, which erupted in June 2011 spreading airborne ash around the globe, leading to airspace closures in Australia. That eruption lasted for months, and produced a high ash column for more than a week.

Volcanic ash is dangerous to aircraft and the Buenos Aires Volcanic Ash Advisory Centre (VAAC) this week issued a warning of airborne ash up to 40,000ft high across Chile and Argentina. The cloud is expected to disperse over Argentina, as as it is no longer being fed by a continuing eruption anyone hoping to fly in or out of Australia has little need to worry. The area of sky that was at risk of volcanic ash for the 24 hours ending 08:30 on 24 April. Calbuco is indicated by the volcano symbol. Buenos Aires Volcanic Ash Advisory Centre

These days the rules about flying in volcanic ash are less stringent than they were during the 2010 eruption of Iceland’s Eyjafjallajökull volcano. When that began, the rule was if there was any ash at all, it was forbidden to fly through it.

Nowadays it is agreed that a small amount of ash can be tolerated for short periods. Unfortunately it is hard to be sure of the density of airborne ash, so it is best to err on the side of caution.

Calbuco had been quiet since a four-hour eruption on August 26 1972, except for an episode of gas emission from fumaroles on 12 August 1996. One of the largest historical eruptions in Chile took place here in 1893-4, throwing 30cm bombs as far as 8km from the summit crater.

These and other volcanoes in the Andes are present as a result of plate tectonic processes, which also cause earthquakes in the region. The floor of the Pacific ocean (actually the Nazca Plate) is being pushed below South America which leads to melting at depth which forces magma upwards to feed the volcanoes. Because seawater has been transported into the melting zone, the magma contains gases such as water vapour and carbon dioxide, and the violent expansion of gas bubbles is what makes eruptions at these volcanoes so explosive.

Schematic cross section through the outer part of the Earth. The volcano on the right is equivalent to Calbuco USGS, Smithsonian Institution, US Naval Research Laboratory

By David Rothery, Professor of Planetary Geosciences at The Open University. This article was originally published on The Conversation. Read the original article.