COVID-19 Pandemic And Declines In Coffee Consumption Have Left Millions Struggling To Make A Living
By The Conversation | September 6th 2020 04:49 PM | Print | E-mail

The reopening of cafes has been one of the highlights of relaxed COVID-19 restrictions for many Australians. During lockdowns, long queues for takeaway coffee were testimony to caffeine’s relevance to our lives.

Yet the precarious employment of so many hospitality workers meant hundreds of thousands of casual café workers and café owners lost work. Rents and mortgages were suspended or lost, upturning countless lives. At the other end of the coffee supply chain, many coffee farmers in poorer countries, who were already struggling to make a living, are doing it even tougher.

The pandemic has exposed the widening wealth gap in our global economy, and nowhere is this better illustrated than by our daily coffee fix. The multi-billion-dollar global coffee industry relies on vulnerable workers at both ends of the supply chain: the café worker serving your coffee and the struggling farmer who grew your coffee beans.

It’s an industry steeped in its colonial past, whose massive profits were built on the back of African slave labor. 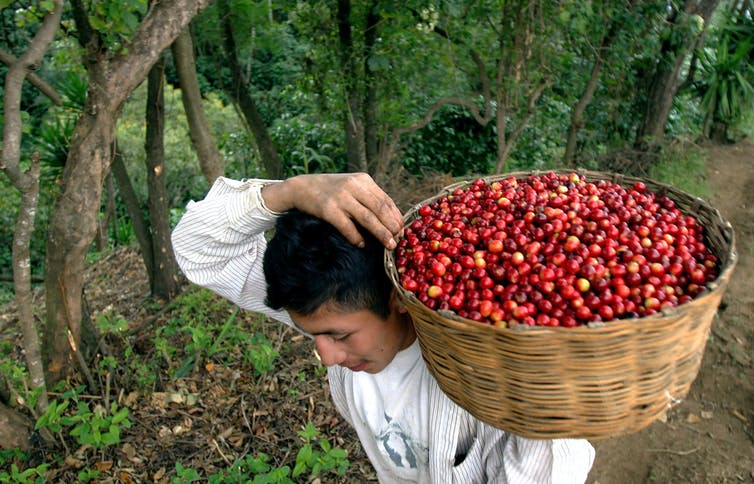 Smallholders on farms of less than 5 hectares produce 60% of the world’s coffee. Moises Castillo/AP/AAP

Coffee is big business, mostly for coffee merchants in affluent countries. It’s among the world’s most-traded commodities and we consume nearly 10 million tons of coffee a year. That’s about 2.25 billion cups a day worldwide. Since 2000 global consumption has increased by 38%.

Over 80% of the world’s coffee comes from 25 million small-scale farmers and 60% is produced by farmers on less than 5 hectares. Many of them struggle to make a decent living.

Coffee’s production and consumption echo its 18th-century origins as a global industry. It’s mostly consumed by people in affluent countries and produced by agricultural workers in the poorer global south.

The coffee industry’s business model is based on a type of neo-colonialism, dominated by a handful of transnational coffee merchants whose profits are bountiful. Plantation economies in developing countries were established by colonial empires whose use of slavery spearheaded the rapid growth of the industry.

The Spanish introduced the use of slaves from Africa in the Caribbean and Latin America. They were quickly followed by the Portuguese in Brazil, then British and French colonialists in the West Indies. African slaves were considered “robust, disease resistant and productive” – physically superior to the local indigenous populations of the Americas, many of whom died from diseases such as cholera and smallpox.

Producers live with poverty and hunger

While the type of slavery that launched the coffee industry no longer exists, other inequities remain. Coffee producers are among the most vulnerable members of the supply chain. When we buy our coffee, most of us are unaware of the bean’s provenance and the arduous labour of workers in small-scale plantations.

It’s estimated almost half of the world’s smallholder coffee producers live in poverty. Most of them are in East Africa, but others are in Latin America and Asia.

Many coffee farmers suffer chronic seasonal hunger. Unlike famine, this occurs between harvest seasons, when the previous year’s food stocks have dwindled, food prices are high and income is scarce.

The COVID-19 pandemic has increased the scarcity of food supplies that were already sporadic. The closure of national borders has further reduced access.

In response to the industry’s inequities, many initiatives are seeking fairer and sustainable outcomes for coffee farmers and for the environment. Some have been in place for decades. Of the programs established by NGOs, governments, multinational companies and other organisations, Fair Trade and Direct Trade are among the better-known ones.

More recently, the 2007 International Coffee Agreement is designed to promote a more equitable coffee trade to support smallholder farmers throughout the world. To overcome problems such as very low wages, poor housing and gender inequality, to name a few, these schemes are by necessity site-specific. Despite some success stories, the complexity of the industry and the wide variety of contexts presents barriers to consistent equitable outcomes and results are mixed.

Another approach in the growing speciality coffee sector – independent cafes serving high-quality coffee – is upending traditional business models. An increasing number of entrepreneurs in affluent countries are forming direct partnerships with coffee farmers. The aim here is both ethical and business-focused: to ensure consistent bean quality and provide a fairer income for coffee producers through direct trade.

The supply chain of coffee and cafes is a complex network of producers, distributors and services. Like all industries affected by the pandemic, some operators will survive and others will go to the wall.

While the pandemic’s impact is an unfolding story, it has brought into sharper focus inequalities in a thriving industry. Fault lines are evident across both producing and consuming nations, with many of those who work in the plantations and in our cafes on the wrong side of the divide.

It might give us something to think about as we enjoy our next coffee from our local café.

By Emma Felton, Honorary Senior Lecturer, Creative Industries Faculty, Queensland University of Technology. This article is republished from The Conversation under a Creative Commons license. Read the original article.