During the pandemic we have all become familiar with a lot of epidemiological concepts.

One that was introduced to us early in 2020 is the “basic reproductive number”, or R0. This tells us about the intrinsic contagiousness of a virus, or its inherent capacity to be spread from one person to another in a particular population.

We also learned about the “effective reproductive number”, or Reff. This tells us about the rate at which a virus is actually spreading through that population.

With the emergence of BA.4/5, there has been some confusion around how these concepts help us to understand why one variant spreads faster than another. 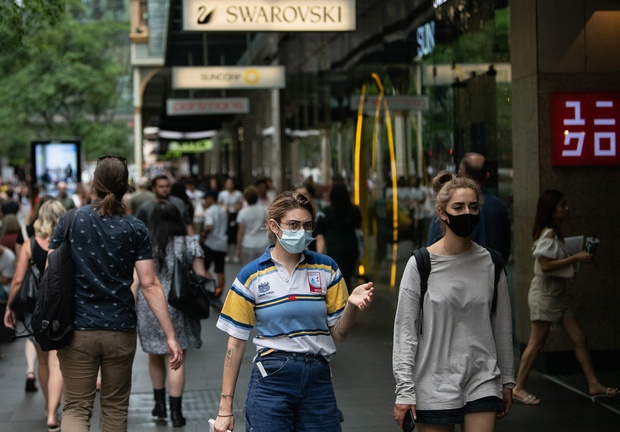 Credit: James Gourley/AAP  via The Conversation

Just because a variant spreads faster, it doesn’t necessarily mean it has a higher R0.

What does the R0 actually tell us?

R0 tells us about the number of secondary cases arising from a single case in a fully susceptible population. It describes the potential capacity of a pathogen (such as a virus) to spread, and is pathogen-specific.

Pathogens with higher R0 values have the potential to cause larger epidemics. For ancestral strains of SARS-CoV-2 (the virus that causes COVID), R0 was estimated to be around 3.

R0 is also population-specific. It depends on the population’s behaviour at “baseline”, before the pandemic. For example, a densely populated city with lots of indoor venues in which people mix is likely to have a higher R0 for the same pathogen than a region with a sparse population and less mixing between groups.

What about the Reff?

The Reff is the average number of new infections caused by an infected individual in the presence of public health measures, behavioural change, and population immunity (from previous infection and vaccination).

The Reff will therefore change over time.

Throughout the pandemic, the Reff has been routinely estimated for Australia and reported to decision-makers.

How do new variants out-compete existing ones?

The COVID pandemic can be divided into several distinct eras, each defined by the emergence of a new variant:

Each of these variants was able to outcompete and replace the one before it.

If we observe that a hypothetical “variant A” is spreading through a population faster than “variant B”, we say that variant A has a “growth advantage” over variant B.

This growth advantage, if sustained, means variant A will replace variant B as the new dominant variant spreading in the population.

A variant can have a growth advantage and not actually be intrinsically more transmissible. In fact, the R0 of variant A may be higher, lower, or the same as variant B.

This is because the growth advantage of variant A, compared to variant B, may be driven by any combination of:

Each of these drivers has a different impact on the future epidemic trajectory and implications for the effectiveness of control measures.

A shorter generation time means a shorter time, on average, between a person becoming infected and then infecting another person. The average number of new infections arising from each infected person is the same for both variants, but those infections happen more quickly for variant A. This will lead to a more rapid rise in cases of variant A, even when R0 is the same.

Increased intrinsic transmissibility refers to the situation where the R0 of variant A is higher than that of variant B. Multiple different biological changes to the virus, such as changes that increase the infectiousness of an infected person, may drive this.

Immune evasion refers to how easily a variant infects people who have previously been infected and or vaccinated.

Variants with very high levels of immune evasion can spread quickly in highly immune populations because there are simply more people in the population who are able to be infected. But it doesn’t mean they are intrinsically more transmissible.

In fact, they may even have a reduced R0 and still have a growth advantage.

All three of these mechanisms can result in a growth advantage, but have different implications for the Reff of variant A compared to variant B.

How has this played out in the COVID pandemic?

Over the course of the COVID pandemic, several variants have emerged with considerable growth advantage over previous variants: Alpha, then Delta, Omicron BA.1 and BA.2, and most recently, Omicron BA.4 and BA.5.

The reasons for the growth advantage over previous variants have been driven by different factors.

When Omicron BA.1 rapidly emerged in late 2021 in highly immune populations (including Australia, where most jurisdictions had achieved more than 85% second-dose vaccine coverage in eligible groups), scientists immediately suspected immune evasion was playing a role.

Analyses of emerging data quantified the relative contribution of immune evasion and intrinsic transmissibility that could explain the rapid spread.

Most recently, we have seen the rapid rise of Omicron BA.4 and BA.5 globally. Emerging evidence suggests immune evasion is, once again, likely a significant factor contributing to the transmission advantage of BA.4 and BA.5 over previous Omicron variants.

This means we expect BA.4 and BA.5 to spread rapidly in Australia, despite our very high levels of vaccination coverage and lots of previous infection.

However, the R0 may not have changed. Even with the same intrinsic transmissibility, simply having more of the population being susceptible again, means the same R0 will end up translating to more infections.

Not a simple calculation

Throughout the pandemic, infectious disease epidemiologists have had to carefully evaluate the available data to estimate why a new variant has a growth advantage.

Others, including some scientists on The Conversation, have unfortunately simply assumed that the growth advantage is due to an increased intrinsic transmissibility.

They have done this by multiplying the R0 of an existing variant by how much faster a new variant is estimated to be spreading. Repeated application of this approach has resulted in an inflated R0 estimate for BA.4/5, similar to that of measles.

While this approach was OK for Alpha, because household studies showed that the variant spread more efficiently in previously unexposed populations, it was not appropriate once Omicron appeared.

None of these considerations are unique to COVID. For example, new influenza variants mostly arise due to immune escape, driving a growth advantage and replacement of the previously circulating strain.

With the emergence of each new variant, the task has become more challenging as the population’s infection history (whether you’ve been infected before, when and how many times) makes interpretation of the data more and more difficult.

And so it is now very difficult to estimate the R0 for BA.4/5.

It is certainly higher than for Alpha and Delta, with the weight of evidence indicating a value at least double that of the ancestral variant (3). That would make it around 6.

And it is likely higher still because Omicron BA.1 out-competed Delta due to both an increase in intrinsic transmissibility and immune escape.

We don’t yet fully understand why BA.2 replaced BA.1, with both intrinsic transmissibility and immune escape potentially contributing. But we do know that immune evasion is sufficient to explain the observed growth advantage of BA.4/5 over BA.2.

Therefore, our current best estimate for the R0 for BA.4/5 is that it is likely similar to that for BA.2, but the actual value remains uncertain. It is likely in the range of 6-10.