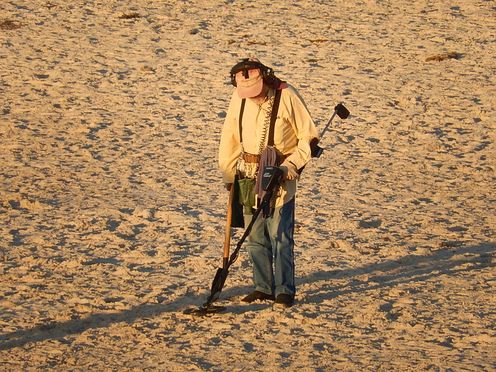 By Suzie Thomas, University of Helsinki

Metal detecting enthusiast Derek McLennan’s recent discovery of Viking-age artefacts at a site in Dumfries and Galloway is both spectacular and impressive.

Not only did he uncover a hoard of Viking-age artifacts, but this is his third major discovery in less than a year.

Treasure hunting is a hobby that, to some, is the stuff of fairytale and yet it is also characterized by a very particular (and un-fairytale-like) stereotype. You only need look at the BBC’s current comedy Detectorists to get a sense of this. It also attracts controversy due to the direct physical contact with objects from the past, since removal of artifacts from the ground without adequate recording (as archaeologists would use), can lead to the loss of irreplaceable information about past events and cultures.

So how does the hobby actually operate? Random finds or poring over maps?

Enthusiasts approach metal detecting in a number of different ways, with particular preferences. The debate as to which model of detector to use is just the start.

Treasure hunters in fairy tales usually start with some rifling through maps and clues, and true to form many detectorists also do research. This can include historical records for clues of past settlements.

Then, some go out on “searches” or “digs” that have been organized for them by their metal detecting club. Membership often covers insurance, as does affiliation to the UK’s National Council for Metal Detecting.

Others prefer to work independently or in small groups, like McLennan, who was out with a couple of fellow enthusiasts when he made his most recent discovery. There is also the “rally season”, when agricultural crops are such that the ground is accessible and serious damage will not be done to the farmer’s main livelihood. At this time, many enthusiasts join metal detecting rallies on pieces of land with prior agreement with (and usually a fee to) the landowner.

These gatherings usually take place over a weekend and can range from groups of 20 or 50 up to more than 1,000. Many archaeologists have (valid) concerns regarding the potential for damage to and loss of previously un-discovered and undocumented archaeological sites and artifacts. Nonetheless many rallies invite one or more archaeologists to assist with the recording of finds.

Detectorists face prosecution if they detect without authorization on designated archaeological or historical sites. And they have to be aware of other aspects of the law, such as obligations under the Treasure Act 1996 if in England or Wales, or the treasure trove common law if detecting in Scotland.

Some detectorists seek out exclusive contacts among landowners, especially if they are wanting access to a piece of particularly productive land. Others attribute success simply to luck. This was certainly the case for David Booth, the finder of the Stirling Hoard in 2009.

He made his discovery just five days after buying his first metal detector.

As a PhD student, I spent a lot of time getting to know members of the British metal detecting community. Some felt that their role had been under-appreciated by archaeologists. And certainly, in the past the relationship between detectorists and archaeologists has been fraught.

The hobby only began in earnest in the 60s, when detectors first became publicly available. Metal detectorists in the early years of the hobby saw archaeologists as an elitist “establishment” out to prevent hands-on interaction with objects of the past by more than just a privileged few.

Equally, archaeologists in the 70s and 80s were alarmed by the rapid growth of metal detecting. Their reaction, primarily through the STOP Campaign (Stop Taking Our Past) of the 80s, was arguably nothing short of a public relations disaster for the archaeological community. But around the same time a minority of local authority archaeologists, such as the late Tony Gregory in Norfolk, were pioneering a more inclusive approach by actually communicating with metal detectorists, and encouraging them to bring their finds to local museums for recording and identification.

These early approaches ultimately led to today’s more typically co-operative relationship in the UK. The Treasure Trove Unit in Scotland, and the Portable Antiquities Scheme in England and Wales take an approachable stance towards engaging with detectorists.

But it’s hardly plain sailing. There are still questions asked from many quarters as to whether enough is done in curtailing illegal activity. A 2009 report commissioned by English Heritage revealed that even though illegal detecting seemed to be decreasing, more could still be done to reduce the problem further.

Another concern is the damage caused to archaeological finds through less well-informed methods of excavation and conservation, which also results in loss of information about the context in which the artifacts were found.

In Finland, where I am currently based, these debates have been brought to a head in the past couple of years by a number of events. For example, there was the discovery by a metal detectorist of an important medieval ring at Espoo, which demonstrated the potential of metal detectors operated by hobbyists for unearthing significant finds, but also previously-rare incidents of “nighthawking” – illegal metal detecting – increasing at sites such as Rapola Castle.

As of yet, there haven’t been any discoveries in Finland to rival this latest hugely significant discovery in Scotland. But the same questions are to a certain extent ubiquitous across countries where the metal detecting hobby exists.

Does the law need to change? Is metal detecting a help or a hindrance to archaeological research?

The interventions by trained archaeologists in no way diminished McLennan’s own role, and subsequent media reports have highlighted the important part he played as the discoverer.