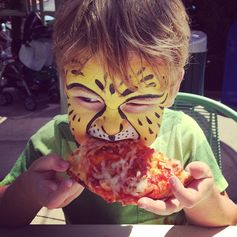 Consider a standard pizza box containing a standard circular pizza. How much more would you be willing to pay for a square pizza that filled the box?

Clearly the square pizza contains more pizza: but is it worth the extra A$2 that Domino’s Pizza is asking?

Domino’s has, for a limited time only (presumably before too many people examine the mathematics), resumed the offer of a surcharge of A$2 on any pizza to obtain a box full Square Puff option – a square rather than the traditional circle.

This concept is common enough: larger servings of food cost more to produce so need to be sold for more to cover costs. But given that there are always initial costs of production and hence economies of scale, a 200g packet of mozzarella will not cost twice the price of a 100g packet.

To compare the pizzas with similar products: most fast food outlets offering chips give increasing value to customers when selling them as larger portions.

But what about the pizza deal? A little mathematics will help.

Take a square with side length s. The area of this square is simply s2. The largest circle that can fit inside has radius s/2. It therefore has area (¼)π s2. Then suppose the price of a circular (standard) pizza is x. We can compare the pizza’s value (with “value” meaning pizza area per dollar: the cheaper or bigger the pizza, the higher the value):

At first glance this appears counterintuitive: why would there be less value when the pizza cost, say A$5, than if the pizza cost A$9? The answer is that the extra money being paid, namely A$2, is a greater percentage of A$5 than it is of A$9.

Note that we did not need to know the size of the pizza box: when comparing the value the side length s vanished. This shows that the problem is independent of the length of the box. Incidentally, this shows (for free!) that we needn’t concern ourselves with crust.

Suppose that you hated crust so much that you discard it at once. You are therefore not interested in the total pizza, but in the total area of toppings on the pizza. By throwing out the strip of crust around the pizza, you are, in effect, making the “actual toppings” into a smaller pizza. But, since the figure of A$7.30 is independent of the size of the box, this critical figure remains.

The contrary assumption – that you love the puff pastry crust that comes with the square pizza – complicates matters. In the time-honored fashion I leave it as an exercise to the reader to develop a model of value based on the increased desire for the crust.

The question now is: what does a standard pizza cost? To the nearest dollar, the “Value Range” of pizzas seems to kick off at A$5; this extends to A$9 for the more exotic “Traditional Range” of pizzas.

The A$5 pizza with the A$2 square surcharge is not a good deal. The Value pizza becomes an oxymoron.

One may then ask: if not a A$2 surcharge, then what? What could Domino’s offer as the surcharge such that the Value pizza, in square form, was actually value for money? Again, a little algebra, based on a Value pizza of A$5, shows that the square pizza would be better value if the surcharge was A$1.35 or less.

So does Domino’s make a profit?

Assume, that this advertising campaign does not induce anyone to buy more pizzas: it is simply a choice on whether to “upgrade”. Domino’s clearly makes money on the Value pizzas (A$5) and loses money on Traditional pizzas (A$9).

One would have to add each of the pizzas sold, noting the loss or gain on each one to determine if this is a money-making exercise. This is possible, and I have no doubt that some pizza boffins have noted that, with the concept of A$2 representing a single piece of low-value currency, they are onto a winner.

Tim Trudgian, Research Fellow in Mathematics at Australian National University, does not work for, consult to, own shares in or receive funding from any company or organization that would benefit from this article, and has no relevant affiliations.