Education: Stop New Age Thinking, Chalk And Talk Might Be The Best Way After All
By The Conversation | November 23rd 2014 01:57 PM | Print | E-mail 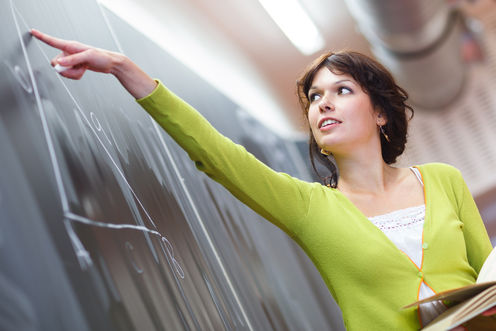 New age ways of teaching where the children guide their learning rather than the teacher are perhaps not as effective. Shutterstock

Seventy teachers from the UK were sent to Shanghai to study classroom methods to investigate why Chinese students perform so well. Upon their return, the teachers reported that much of China’s success came from teaching methods the UK has been moving away from for the past 40 years.

The Chinese favor a “chalk and talk” approach, whereas countries such as the UK, US, Australia and New Zealand have been moving away from this direct form of teaching to a more collaborative form of learning where students take greater control.

Given China’s success in international tests such as PISA, TIMSS and PIRLS, it seems we have been misguided in abandoning the traditional, teacher-directed method of learning where the teacher spends more time standing at the front of the class, directing learning and controlling classroom activities.

Debates about direct instruction versus inquiry learning have been ongoing for many years. Traditionally, classrooms have been organised with children sitting in rows with the teacher at the front of the room, directing learning and ensuring a disciplined classroom environment. This is known as direct instruction. Direct instruction is the traditional way of teaching - where a teacher stands at the front of the class and directs the learning. Shutterstock

Beginning in the late 1960s and early ‘70s, teachers began to experiment with more innovative and experimental styles of teaching. These included basing learning on children’s interests, giving them more control over what happened in the classroom and getting rid of memorizing times tables and doing mental arithmetic. This approach is known as inquiry or discovery learning.

Based on this recent study of classrooms in the UK and China and a recent UK report titled What makes great teaching?, there is increasing evidence that these new-age education techniques, where teachers facilitate instead of teach and praise students on the basis that all must be winners, in open classrooms where what children learn is based on their immediate interests, lead to under-performance.

The UK report concludes that many of the approaches adopted in Australian education are counterproductive:

Enthusiasm for discovery learning is not supported by research evidence, which broadly favours direct instruction.

Especially during the early primary school years in areas like English and mathematics, teachers need to be explicit about what they teach and make better use of whole-class teaching.

As noted by John Sweller, a cognitive psychologist from the University of New South Wales in the recent Final Report of the Review of the Australian National Curriculum:

Initial instruction when dealing with new information should be explicit and direct.

Many in Australian education believe children are only really learning when they are active. As a result, teachers are told it is wrong to sit children at their desks and ask them to listen to what is being taught.

Again, the evidence proves otherwise. The UK report suggests that even when sitting and listening children are internalizing what is being taught. Learning can occur whether they are “active” or “passive”. Often derided as “drill and kill” or making children “parrot” what is being taught, the UK report and other research suggests that memorization and rote learning are important classroom strategies, which all teachers should be familiar with.

The UK report states that teachers need to “encourage re-reading and highlighting to memorise key ideas”, while research in how children best learn concludes that some things, such as times tables and reciting rhymes, ballads and poems, must be memorized until they can be recalled automatically.

Trying to cater to everyone has no effect

One of the education fads prevalent across Australian classrooms, and classrooms in most of the English-speaking world, involves the concept that all children have different levels of intelligence and their own unique learning styles. (For example, some children learn best by looking at pictures, by being physically active, by hands-on, tactile learning or by simply reading the printed page.)

The UK report concludes such a teaching and learning strategy is misplaced:

The psychological evidence is clear that there are no benefits for learning from trying to present information to learners in their preferred learning style.

Instead of taking the time, energy and resources to customise what is being taught to the supposed individual learning styles of every child in the classroom, it is more effective to employ more explicit teaching strategies and to spend additional time monitoring and intervening where necessary.

Lavish praise does no-one any good

One of the prevailing education orthodoxies for many years is that students must be continually praised and that there is no room for failure. The times when “4 out of 10” or an “E” meant fail are long gone. Supposedly, telling children they are not good enough hurts their self-esteem.

The UK report says that, while praising students might appear affirming and positive,

the wrong kinds of praise can be very harmful to learning.

Overly praising students, especially those who under-perform, is especially counterproductive. It conveys the message that teachers have low expectations and reinforces the belief that near enough is good enough, instead of aiming high and expecting strong results.

There’s not just one way to teach

To argue that some teaching and learning strategies are ineffective does not mean that there is only one correct way to teach. While research suggests some practices are more effective than others, it also needs to be realized that teaching is a complex business. Teachers need various strategies.

In the early years of primary school, children need to memorize things like times tables and poems and ballads so that they can be recalled easily and automatically. Education is also about curiosity and innovation and there will be other times when rote learning will be unsuitable – for example, when students explore a topic that excites them and where they undertake their own research and analysis.

Depending on what is being taught, what has gone before and what is yet to come, whether students are well versed in a particular area of learning or are novices, and even the time of day, teachers must adapt their teaching to the situation and be flexible.

The problem arises when teachers and teacher education academics privilege one particular approach to the detriment of all others.