Electric 'Batmobile' Shows Chinese Want To Be In The Supercar Market
By The Conversation | January 10th 2016 05:30 AM | Print | E-mail 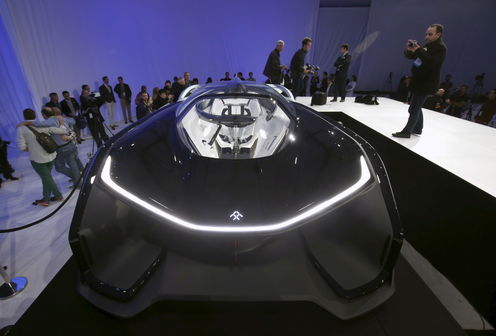 Despite not actually having a car in production, the firm Faraday Future has headline-writers gushing about its “Tesla-killing supercar” – an all-electric car that looks like the Batmobile.

There is no doubting that the FFZero1 concept car just unveiled at the Consumer Electronics Show in Las Vegas this week is eye-catching, but it’s one of a number of new and transformed car brands. For example, the Detroit Electric SP:01 or the recently announced Fisker Force 1 and London Taxi Company’s TX5.

What these companies have in common is a part- or fully-electric powertrain, a willingness to experiment with new business models, and Chinese funding.

In a lecture given in 2010, Coventry University Professor Tom Donnelly predicted that the Chinese had the global auto market in their sights. The size of the Chinese domestic market and the challenges of meeting standards in competitive Western markets mean that it’s unlikely we will see forecourts spilling over with Chinese brands such as Geelys or Dongfengs any time soon. But as Chinese manufacturing moves up the value chain, China is using its financial clout to buy-up well-known brands and supply expertise.

The most obvious example of this trend is the purchase of Volvo by Geely: this sturdy Swedish brand brings first-rate expertise and supply-chain networks. The part-purchase of Peugeot by Dongfeng follows a similar logic. Just as important is that these purchases provide the scope to enable Chinese manufacturers to test global markets and gain credibility, not just in Europe and America, but in the all-important domestic market where foreign brands remain (for now) highly prized.

This is a classic example of a technological catch-up strategy, and there are plenty of examples of other multi-nationals in emerging markets playing the same game – India’s Tata Motors asute purchase of Jaguar Land Rover, for example.

But, as the FFZero1 demonstrates, there is also something else happening: a leap-frog strategy whereby Chinese firms seeks to exploit new emerging technologies to gain an edge on Western competitors in fields that are still wide open.

BYD Autos’s Denza car, built through a collaboration with Germany’s Daimler AG, is an electric vehicle that competes on price and performance with anything currently on the market. Hail a cab in Brussels and – ironically, given the EU’s efforts to promote alternative fuels – if the car is electric, it’s probably a Denza.

This is due in part to a conscious effort from the government in Beijing. The 2012 Energy Saving and New Energy Vehicle Industry Development Plan seeks to reduce energy dependency on Middle East states, tackle the air pollution problem, grow the Chinese car market and build a technological lead. 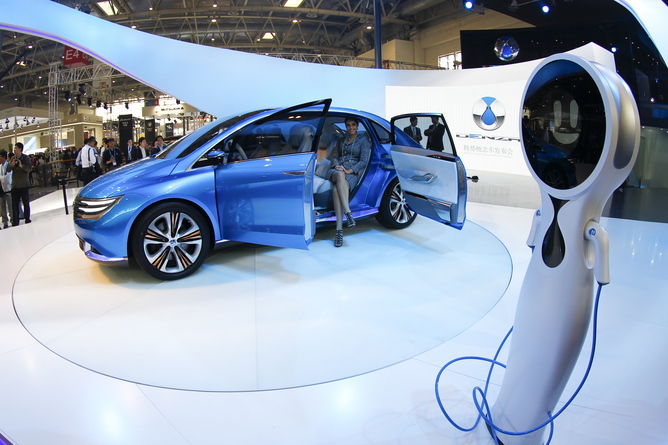 More everyday than ‘supercar’, but the Denza has challenged established brands and models. Diego Azubel/EPA

Yet this spate of investment in electric supercars is arguably more a product of global connections and globally-minded individuals.

Billionaire investor Jia Yueting has sought to challenge (and emulate?) Tesla Motor’s CEO Elon Musk by backing Faraday Future’s prestigious, and at this stage concept-only, sportscar. Faraday Future brings much-coveted US expertise in energy storage, autonomous car intelligence and connectivity, but is aimed squarely at China as one of the key target markets.

Are we witnessing a land-grab of the future automotive industry? Should we be worried? Certainly the Chinese aren’t alone in looking at alternative fuels and new business models – every automotive industry company management team and a good few technology companies have this firmly on their radar. We’ve also been here before: waves of US and Japanese firms have in the past embarked on shopping sprees as the firms go global and internationalize their markets. Now Chinese, and Indian, firms are doing the same. Yet China is different, with Chinese firms demonstrating a huge appetite for creating global connections with enormous scope for experimentation based on its dizzying number of competing domestic and international brands.

To emphasise, it’s not just Chinese money that’s driving this wave of new ventures, but an awareness of the benefits that can come from harnessing the strengths of the different technology, design, supply chains, and target markets. It’s equally refreshing to see how entrepreneurs such as Alan Lam, with his international background, are willing and able to roll the dice and develop new car marques that may succeed or fail in segments traditional car-makers may overlook.

How far Faraday Future gets to realizing its vision remains to be seen. But it is this combination of new technologies, new players and new attitudes that’s driving a wave of fresh initiatives. The good news is, with the right connections, there are opportunities for everyone.

By Richard Brooks, Research Associate - Centre for Business in Society, Coventry University. This article was originally published on The Conversation. Read the original article.