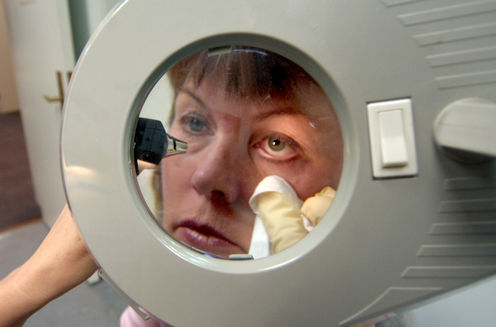 Scientists have discovered that the high pressure in the eye that occurs with most common forms of glaucoma can trigger two genes that work together to cause vision loss, a finding that may help pave the way for new glaucoma drugs.

There is currently no way to prevent onset or worsening of glaucoma and it is usually treated by managing fluid pressure inside the eye.

The researchers looked at the genes involved in primary open-angle glaucoma, the most common form of the disease, which usually affects people over 50 and can cause blindness.

The study, published in the journal Molecular Cell today, suggests that increased pressure in the eye from glaucoma activates two genes which work jointly to kill retina cells and impair vision.

The research team, led by Professor Kang Zhang, Chief of Ophthalmic Genetics and founding director of the Institute for Genomic Medicine at the University of California at San Diego in the US, used a mouse model and human eyes to show how a pair of genes damage retina ganglion cells, which can lead to cell death.

“The difficulty in previous research was that it mainly focused on lowering eye pressure rather than examining the cause of retinal ganglion cell death, which is the root of glaucoma,“ he said.

“We are excited about the prospect of developing a new class of drugs to treat glaucoma, which affects tens of millions of people."

The research team plan to conduct pre-clinical studies testing the effectiveness and safety of drug treatment before starting human trials.

The finding comes after decades of being in the dark about the key risk factors in the mechanisms at work in the blinding neurodegenerative disease and how genes might influence it.

Eye pressure, age and genetics were known to be factors but to what extent they were responsible and how they contributed remained a mystery.

Professor Hugh Taylor, the Harold Mitchell Chair of Indigenous Eye Health at the Melbourne School of Population and Global Health at the University of Melbourne said while a few specific genes for glaucoma had been found, there were many others associated with it. It was also unclear how the genes worked or were linked to the disease.

“Glaucoma has a very strong hereditary component but it was hard to figure out what was going on and how different genes might be interacting and contributing to its development,“ said Professor Taylor, who was not involved in the research.

“Generally, people with close relatives who had glaucoma have an eight-fold increased risk, with early treatment requiring constant surveillance and testing.”