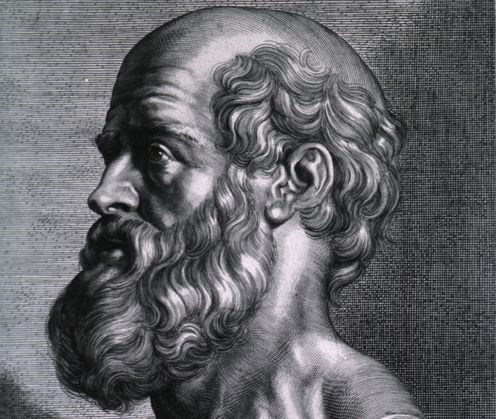 Not the one we have fixed in our imaginations. Peter Paul Rubens, 1638

Hippocrates is considered the father of medicine, enemy of superstition, pioneer of rationality and fount of eternal wisdom.

Statues and drawings show him with a furrowed brow, thinking hard about how to heal his patients.

And today, the Internet is full of claims that if you follow a supposedly Hippocratic diet of raw organic foods or concentrate on one of his alleged favorite foods, such as watercress, you will be healed.

The most famous of the treatises linked to his name over time is the Hippocratic Oath, which has sometimes been taken by medics as they vow to uphold ethical standards in their profession. And what a model it offers: in the Oath doctors are to keep away from abortion and euthanasia. They must not blurt out their patients’ secrets. Nor should they have sex with patients – men or women, free or slave.

But in fact, the Hippocratic Oath has nothing to do with Hippocrates. So why has it been attached to his name?

The reality is that not just the Oath, but the 60 or so other ancient Greek treatises on medicine that we call “the Hippocratic corpus”, are all anonymous. They were written over many centuries in different Greek dialects. They also have different ideas about the body and healing. So Classics scholars today are clear that they can’t all have been written by one man.

The philosopher Plato gave the only near-contemporary account of the real Hippocrates behind the myths. Hippocrates was known well enough as a physician in the ancient world that people would recognize him by name. From Plato we know that Hippocrates came from the island of Cos, close to the the coast of what is now Turkey, and taught medicine for a fee. He was an “Asclepiad” – which could mean one of a family claiming descent from the god of medicine, Asklepios, or just a “healer”. But it is not clear what beliefs he held about healing.

Anything else you read about the historical Hippocrates is made up. There are no recorded dates about his existence. Plato’s references would put him at around 430 BC, but if you read any firm birth and death dates, they are figments of someone’s imagination.

Making up a story

Hippocrates is an extreme example of our human desire to tell a story, and to establish founders. Different facets of the surviving medical treatises from ancient Greece were taken out and merged to create his personality and, later, a whole biography. People made up family trees for him and speculated, with no evidence, on his education and character.

So we imagine Hippocrates as a caring and attentive person simply because some ancient Greek treatises talk about observing patients very carefully. Because the treatise On the Sacred Disease talks about seizures as coming not from the gods but from an imbalance of phlegm in the body, we think of Hippocrates as someone who rejected anything superstitious. And because one surviving treatise is the Oath, Hippocrates is also linked to high moral standards.

What does the Oath really say?

Most of the lines in the Oath are not about treating patients at all. Instead, they are about physicians teaching each other’s sons without charge, and taking care of their old teachers. Whichever group of ancient physicians came up with this document, their first concern was with their identity as a group.

Even the famous lines about euthanasia and abortion are far less straightforward than we expect. There is actually no ban in the Oath on euthanasia in our modern sense of an option when a person is suffering from an incurable condition. The word is from the Greek, meaning “good death”, but for an ancient Greek a good death was that of a young man in his prime dying on the battlefield. Instead, the Oath suggests a much broader concern for keeping control of potentially fatal drugs rather than handing them out to those who could misuse them.

As for abortion, the Oath says: “I will not give an abortive pessary.” The wording here is the most common of the verbs “to give”, which means it is hard to know whether the sense is just “hand over” or a more technical “administer”. And it leaves open the possibility of an abortive drug taken by another route – by mouth – being administered by a physician. Maybe the real worry in the Oath here is about the pessary as a particularly potent mode of administration, or again about letting drugs pass out of the hands of the physician to those who may misuse them.

And as for the “no sex with patients of either sex” clause: this raises the possibility that the Oath was not a normal part of ancient medicine, but rather a very special document put together in some unusual local situation. Perhaps physicians had been doing precisely this, and the patients had completely lost faith in those who claimed that they could heal them.

Linking all these very different ancient Greek documents together and tying them to the name of Hippocrates has been common since just a few centuries after he lived. Perhaps it makes us feel better to see one, humane, person rather than a faceless committee at the origins of medicine and medical ethics. And not just any person, but this idealized figure, the perfect physician who is more knowledgeable and more caring than any living physician we are ever likely to meet.

Over the history of medicine, we have made up the character of Hippocrates to fit what we think physicians, or medicine itself, should be like. Even the Oath has been edited to fit different societies. But isn’t it time now to talk about medicine without always nodding to a shadowy figure of the past?

Helen King, Professor of Classical Studies at The Open University, has received funding from Arts and Humanities Research Council and from the Wellcome Trust.