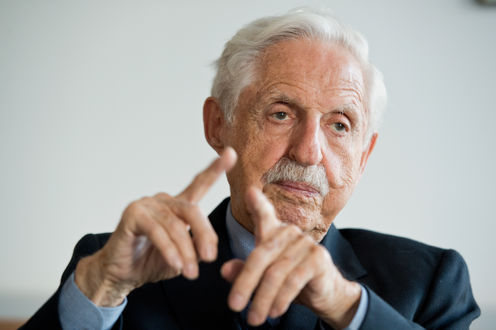 By Sonia Oreffice, Professor of Economics at University of Surrey

Carl Djerassi, who died recently aged 91, has been honored globally for his work.

In his remarkable career he also did pioneering work with antihistamines and topical corticosteroids for inflammation, but it is for his work on the pill that he is rightly world famous: he and his team were the first to synthesize a hormone instrumental to the creation of the oral contraceptive pill as we know it.

Birth control innovations have had a remarkable impact on modern societies in the past five decades. They enhanced women’s opportunities to control childbearing and their careers, allowed them to choose contraception and plan fertility independently of their partner or spouse, increased female human capital accumulation, labor market options and earnings.

The dramatic increase in women’s education, college and professional degrees, and participation in the labor market since the 1960s can also be partly explained by birth control innovations.

Reliable contraception allows women to invest in their human capital with much less risk and so achieve higher education and professional degrees. By separating sex from procreation and giving women more control over their bodies, it also lifted the “obligation” to marry early. The widespread availability of a very low-cost, highly reliable, easy-to-use technology such as the pill directly improved the well-being of single women, for whom an unwanted pregnancy can be very costly. At the same time, the high rate of usage of this contraceptive and the new fertility and career opportunities it entailed increased the well-being of women in marriages or relationships too.

Birth control technology affected both men’s and women’s ability to make decisions about the number of children they had and when they had them. But such a shift in partners’ fertility decision rights affected the balance of power between men and women, and female empowerment more generally.

A crucial force at play here is the legal and biological asymmetry that has characterized men and women: women do not need to be partnered to become mothers, whereas men cannot enjoy paternity without being in a couple (the legal availability of surrogate mothers partially changes this statement).

The birth control revolution is clearly not over yet: recent developments have focused on assisted reproductive technologies, which include in vitro fertilization and sperm/egg banks. These also enhance freedom of fertility choices, while standing at the other end of the spectrum of birth control methods like the pill.

In principle, a technology that helps women and couples to conceive and have children should have a similar positive impact on female empowerment as the pill because it also allows women to control the timing of childbearing, have children later in life, and to improve choice and opportunities outside marriage.

The pill may help men too

The cultural revolution created by birth control technology innovations such as the pill also contributed to the awareness and, little by little, the social acceptance of working mums, older mums, and children born to cohabiting parents.

The ability to bear children – and its biological and socio-economic implications – still challenges working women, while affecting society well beyond women’s working lives. The pill, along with the other broadly defined birth control technologies, brought more freedom of choice and less constrained planning and timing to couples and singles.

Djerassi and the other scientists who discovered and fine-tuned the birth control pill (at the start it had very high hormonal doses) improved the well-being of millions of women, but also of men, who could live with mothers, wives, female friends and colleagues more satisfied with themselves, with more realized potential and more freedom to choose. I hope men realize this. With knowledge and science, against superstition and prejudice, well-being and equality are pursued.