How My Research On Ancient Egyptian Poetry Led To An Amazing Great Pyramid Discovery
By The Conversation | November 8th 2018 11:00 AM | Print | E-mail

What began as an expedition to record the inscriptions of ancient Egyptian quarry workers produced a remarkable discovery about the Great Pyramid at Giza. My colleagues and I in the Anglo-French joint archaeological mission to the ancient quarry site of Hatnub recently revealed the existence of a well-preserved haulage ramp dating to the time of the Great Pyramid, roughly 4,500 years ago.

We think this could significantly change the theories about how the workers who built the monument were able to transport such large blocks of stone to great heights. It could even provide evidence that pulleys were invented hundreds of years earlier than previously documented.

The rock-cut ramp is flanked by two flights of rock-cut stairs, into which are cut post holes that would originally have held wooden posts, now long perished. The pattern of post holes is well enough preserved that we can begin to reconstruct a pulley system that would have been used to lift large blocks of alabaster out of the open-cast quarry. 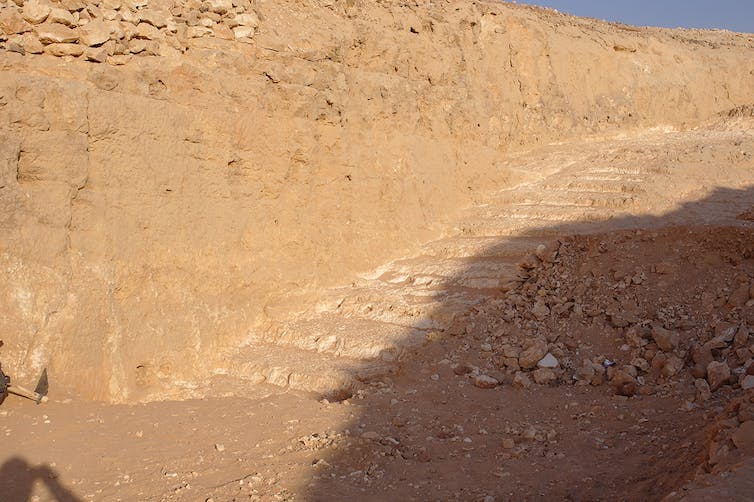 While some quarrymen would have been stationed above the blocks, hauling them upwards directly, others would have stood below the blocks, pulling downwards. Their ropes would have been lashed round the post holes and attached to the alabaster blocks, so that both groups were exerting force to pull the blocks up out of the quarry.

This stone haulage system makes efficient use of the limited available space on the ramp, and it is reasonable to speculate that this same pulley technology would also have been used in the construction of the Great Pyramid. While pulley systems are well known from Greek civilisation in the first millennium BC, the evidence from Hatnub pushes their use much further back in time, as it pre-dates the Greek evidence by some 2,000 years. 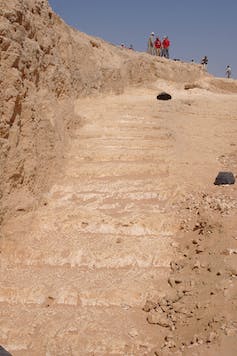 The Hatnub haulage ramp is also much steeper than most previous reconstructions of Egyptian haulage ramps. This is significant because one of the long-standing objections to the theory that the Great Pyramid was build using a single large ramp was the enormous volume of such a ramp (which would have had a greater volume than the Great Pyramid itself). With a much steeper gradient, the length and volume of such a haulage ramp would be much smaller, suggesting that this old theory needs to be re-evaluated more seriously.

Many other theories have previously been proposed for how the Great Pyramid was constructed. For example, a ramp might have coiled around the sides of the pyramid. There are also many suggestions involving levers and similar mechanisms. (And, of course, there are always those lacking in imagination who cannot accept a human explanation, and instead groundlessly evoke aliens or Atlanteans). The merit of our recent discoveries is that they give us solid archaeological evidence we can use to test previous theories.

These discoveries have emerged from the work of the University of Liverpool’s joint expedition with the French Institute for Oriental Archaeology in Cairo to Hatnub, which is some 20km from the Nile in the eastern desert of Middle Egypt. This quarry was the most prestigious ancient source of Egyptian alabaster, the milky white banded translucent stone that was used by the Egyptians to make vessels, statues, and architectural items.

Our original aim was purely to record the surviving inscriptions left by quarrymen 4,500 to 4,000 years ago. I began my career studying Egyptian poetry, but it turns out quarrymen could on occasion get quite poetic when writing their graffiti in the quarry. And so I now study these texts, written in a cursive version of the Egyptian script known as hieratic.

We have so far identified more than 100 previously unrecorded texts, offering a wealth of information about the organization and logistics of the expeditions that came to the quarry to extract alabaster. They mention royal patronage, the hundreds (and, on occasion, thousands) of expedition personnel, the numbers of blocks mined, and the time taken to ferry them to their ultimate destinations. 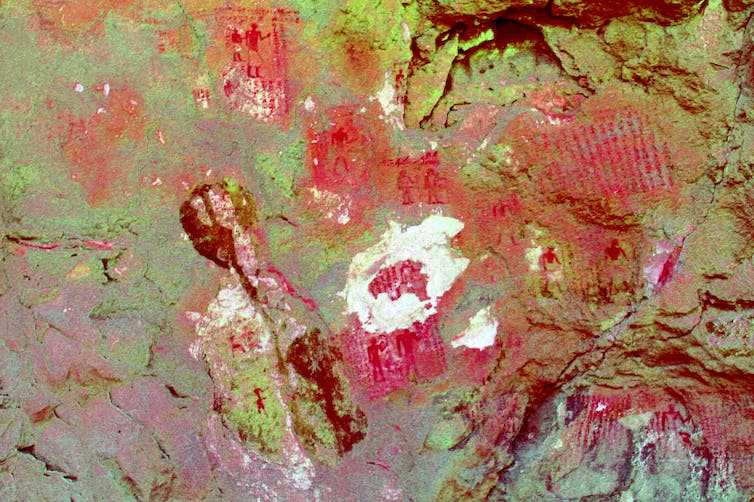 Some of the inscriptions take a more long-term point of view, and seek to convince future visitors to the quarry that their predecessors were good people, and deserve to be treated with respect (and offerings) after their death. In the 21st century, we are accustomed to talk of “posting” to “walls”. But at Hatnub we have an actual Bronze Age wall whose texts speak across the years, and create a solidarity among those who came to work in the quarry, generation after generation.

More recently we have expanded our work (and our team) to record the wider archaeological features of the extremely well-preserved Bronze Age industrial landscape around the quarry. We are collecting and analysing the stone tools that litter the site, offering insights into the process of extracting blocks from the bedrock. Through experimental archeology we are learning just how rapidly alabaster needed to be worked before it dried and hardened after extraction.

We are also studying the ancient road connecting the quarry to the Nile Valley, which is flanked by hundreds of simple dry-stone shelters used by workmen for accommodation and stoneworking. We have simple dry-stone religious cairns and other structures of possible ritual function. The recent clearance of debris from the haulage ramp leading out of the quarry has been part of our study of this wider context.

Our ultimate goal is to study all aspects of stone extraction and transport at Hatnub, integrating the rich textual and archaeological evidence to provide a more holistic understanding of quarrying in ancient Egypt. Few sites offer the range and diversity of evidence that survives at Hatnub. We have many years of work ahead of us; the potential for further exciting discoveries is huge.

By Roland Enmarch, Senior Lecturer in Egyptology, University of Liverpool. This article is republished from The Conversation under a Creative Commons license. Read the original article.