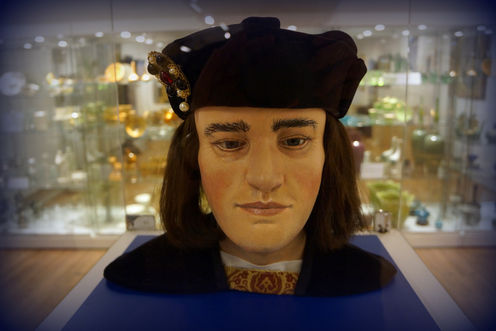 By Sarah Hainsworth, University of Leicester

The discovery of Richard III’s skeletal remains under a car park in Leicester revealed the final resting place of the last English monarch to die in battle. We know that he was killed at the Battle of Bosworth Field on August 22 1485 but not about what ultimately proved fatal.

Using modern forensic examination, we have now discovered that Richard’s skeleton sustained 11 wounds at or near the time of his death – nine of them to the skull, which were clearly inflicted in battle. The injuries to the head suggest he had either removed or lost his helmet. The other two injuries that we found were to a rib and his pelvis. View from below. The Lancet

These injuries to his skeleton were all perimortem, in other words inflicted at or close to the time of death, because there was no evidence that these were old wounds that had subsequently healed.

With help from the Royal Armouries in Leeds, who have expertise in the medieval weaponry of that time, we also wanted to identify the medieval weapons that were potentially responsible for his injuries using an analysis of the tool marks on the bones. The most likely injuries to have caused Richard’s death are two wounds to the bottom of the skull: a large sharp-force trauma, possibly from a sword or staff weapon such as a halberd or bill; and a penetrating injury from the tip of an edged weapon.

We didn’t find any defensive wounds on his arms which would suggest he was otherwise armored, and while the injury to his pelvis was potentially fatal, his armor would have given protection against this injury on the battlefield and therefore we think it most likely that it was inflicted after death. May have been missing helmet. The Lancet

Richard’s head injuries are consistent with some near-contemporary accounts of the battle, which suggested that Richard abandoned his horse after it became stuck in a mire and was killed while fighting his enemies.

Microscopic marks (striations) on the bones result from the way in which the imperfections on the edge of a blade from manufacturing, sharpening and use leave a distinct pattern or fingerprint on the bone surface. The striations found on three of the injuries to the top of the skull show three different directions to the marks and therefore could have come from one or several assailants. However, other striations in different injuries have similar patterns and so were most likely the result of multiple blows from one single sharp-bladed weapon.

Our study, published in The Lancet, was the result of work by a team of archaeologists and a forensic imaging team from Leicester University’s East Midlands Forensic Pathology Unit and the Department of Engineering. Despite Richard’s skeleton being 500 years old, it still holds many clues for modern scientists and archaeologists. For example, other pieces of research have shown that the king had scoliosis of the spine and have re-constructed his face, while geneticists may be able to find clues about Richard III’s health while he lived.

We wanted to use the modern techniques applied in forensic medicine and engineering as a powerful complement to traditional archaeological techniques. Using full-body CT scans and computed and micro-computed X-ray tomography (another type of CT scan that can be used to create 3D images) of the injured bones, we were able to develop a fuller picture of the significant injuries.

While it is not possible to know, after 500 years, whether Richard sustained significant soft-tissue injuries that could have led to his death, the skull injuries would certainly have been fatal.

From battle to obscurity and back

Our findings add to the winding story of Richard III’s journey from battle to obscurity and legal dispute over where he should be interred. After his death, Richard was buried in the church of Greyfriars in Leicester, a friary of the Friars Minor (or Franciscans) which was dissolved in 1538 in the reign of Henry VIII.

Although local stories from this time said that his remains were disinterred and his body thrown from the Bow Bridge in Leicester into the River Soar, the ruins of Greyfriars were also discovered in the car park excavation and the skeleton was found in the choir of the church, a location typically reserved for people of high status. DNA comparison with matrilineal descendants of his sister showed that it was indeed Richard. While historians have pieced together much about how this monarch lived; with the discovery of his remains we certainly now know more about how he died.