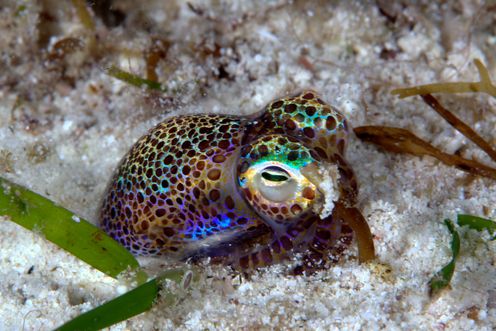 The bobtail squid and bioluminscent bacteria are just one of hundreds of examples of mutualism. Klaus Stiefel/Flickr, CC BY-NC

By Alex Jordan, University of Texas at Austin

Reproduction for a female fig wasp can be a nightmarish process. When she is ready to lay her eggs, she leaves the fig in which she was born and became pregnant and searches for another.

After she finds it, she enters it by squeezing through a narrow opening built for that exact purpose, often ripping off her wings and antennae in a violent act of motherly devotion.

Once inside the seed-filled chamber, two important things happen. The female wasp fulfils her biological imperative by laying her eggs. But in doing so, she also delivers pollen brought from her natal fig, which is the only way the host fig can be fertilised. After this transaction, the wasp dies while the fig goes on to develop.

This co-dependency is striking. Why would the wasp die in an act that benefits the fig as well? Why does the fig provide the perfect nursery for growing wasps?

Figs and their pollinating wasps are perhaps the classic example of a relationship called mutualism. A fascinating form of symbiosis (when two species live in close association), mutualism has led to some of the most beautiful and intriguing diversity in the natural world.

It’s the bond between a bee and a flower; a clownfish and its anemone; a man and his dog. But it’s also a puzzling system that, at first glance, is difficult to explain with evolutionary theory.

It all boils down to this question: why would two completely unrelated organisms cooperate?

Since the late 1850s, after Charles Darwin published The Origin of Species, we know that individuals who survive and reproduce are favored by the process of natural selection. Over the course of the next 150 years, we came to understand that selection operates not on individuals, groups or species, but at the level of the gene.

This “selfish gene” hypothesis can explain paradoxes that Darwin himself could not reconcile, such as why social insect workers forgo their own reproduction to raise the offspring of the queen.

Worker bees do all the work in a hive.

We now know that such systems can evolve when identical copies of genes are shared by both workers and queens, and sacrifices made by individuals are outweighed by benefits at the level of the gene in a process called kin selection.

How, then, can we explain a system where two different species – ones that can never benefit through kin selection – cooperate? Nature is famously “red in tooth and claw”, so how could interspecific cooperation, the stuff of a Disney screenwriter’s dreams, be possible in such a ruthless world?

Under the watchful eye of natural selection, only the genetic contribution to the next generation counts. Playing nice doesn’t score points with mother nature, and helping another individual that is not only not your kin, but not even your species, seems a stretch.

Yet these systems do exist, and they occur because both parties benefit from living together in a mutually beneficial relationship. When leafcutter ants “farm” fungi inside their nests to consume as food, the fungus gains housing and protection by their notoriously security-conscious hosts.

When a bobtail squid feeds sugars and amino acids to the bioluminescent bacteria residing in their light organ, it gains camouflage from the light the bacteria emit.

This biological bartering can take the form of an exclusive contract that’s essential to the survival of both parties called obligate mutualism (the 11 cm-long beak of the sword-billed hummingbird is the exact length for pollinating certain species of Andean passionflowers). Or, it can be a looser association called facultative mutualism (some wrasse will pick parasites off larger fish, offering cleaning services in exchange for a small meal).

It also doesn’t have to occur only between two partner species. Humans are home to 100 trillion microbes, most of which reside in our gut. While these bacteria feed on our nutrients, it is now abundantly clear that we rely on these microbes for protecting us from pathogens and helping us with digestion.

Living together is not always so convivial, and mutualism works in much the same way as its evil twin – parasitism. Like mutualism, parasitism is a type of symbiosis between two species. Only here, one party’s gain comes at another’s expense. In the eyes of natural selection, these two systems differ only in the fitness payoffs to the players in the game.

By sheer weight of numbers, most symbioses are asymmetric with one winner and one loser – think of intestinal parasites, flukes that create zombie fish or viruses such as Ebola.

Yet when the interests of different species are the same, beautiful things can happen. Forget stars aligning; the wondrous sight of the softly-glowing Vibrio bacteria housed inside the mantle of the sepiolid squid might lead us to change that old saying. In the world of mutualisms, our squids have aligned!

Alex Jordan, Postdoctoral Fellow in Integrative Biology at University of Texas at Austin, receives funding from NSF and HHMI.  This article was co-authored with Carla Avolio.